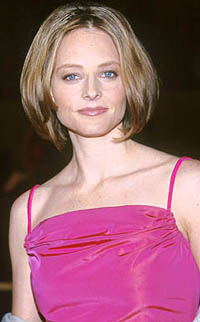 She may be a mother of three and a star drawn to often smaller projects, but Jodie Foster, even when pregnant, has no fear about stepping into the shoes of Nicole Kidman, as she did with David Fincher's riveting Panic Room. PAUL FISCHER talked action, motherhood and life with the Oscar winner.

Jodie Foster may be about to turn 40, but you wouldn't know it. Far more petite than she appears on screen, and impeccably attired in an olive green pants suit, Foster was in great spirits and full of humour when we met to chat about her latest film, "Panic Room", an entertaining thriller in which Foster plays the mother of a diabetic daughter, being hounded by a trio of menacing home invaders, while holed up in a fortress-like room. Some actors thrive on the fantasy element of being an 'action heroine' on screen. Foster laughs at the label." I don't know if I see myself as really an action hero, but I like doing physical movies and I like doing movies where the writing is very lean."

Not only the writing but also Foster herself looked more than lean doing battle with her enemies in the film. From the first week or two of shooting, Foster was pregnant, which added more headaches on an already troubled production, recalling how exhausting it was making the film. "I did a lot of sleeping, and I remember Kristen [Stewart, who plays her daughter] made fun of me constantly because every time she'd ask me what I had for lunch, it would be: 'Well actually I slept through lunch' I did a lot of sleeping and sometimes I would sleep in between set ups," the actress laughingly recalls.

This isn't the first time that the two-time Oscar winner has played a mother on screen. Despite her own reality of motherhood to draw upon, Foster happily admits "that even before I had my first child, I think I was kind of a pretty material person, which is just part of my make up," Foster explains. Yet, she adds, "there is a little switch that still goes off which is hard to explain. I think intellectually you know that you're doing it for your child, but its just a visceral feeling that you've experienced before of almost projecting everything, every fear that you have, on to that." For Foster, "Panic Room" came to her by accident. Some two weeks into shooting, star Nicole Kidman dropped out due to a shoulder injury.

Ironically, Foster, had begun work on "Flora Plum" and ITS star, Russell Crowe, had become injured causing Foster's film to shut down. "So I happened to be available, and I didn't have any plans for the rest of the year." It wasn't tough for Foster to be persuaded to jump aboard "Panic Room". "I love Fincher, have known him for a long time, have wanted to work with him for ages and I followed what he does. So I knew of the project immediately, had already read the script and had friends on the movie too, so frankly, I came to THEM as quickly as they came to me and offered my services."

Foster says that she was attracted to "Panic Room's" "beautiful, lean, spare script, and that kind of discipline, the discipline of saying: OK I'm not going to write 45 minutes of backstory to tell you who the characters are; instead, the movie's just going to start, and all of the drama you're going to need to know to be connected to everybody, to know why they have the relationships that they do, is going to be within the plot, within the drama of the film, which is REALLY hard to do. You just don't see movies like that."

Also within the genre, one rarely sees the kind of character Foster is allowed to embark on throughout the film, beginning as she does, somewhat placid and conservative. Foster sees her character "as being a mum who has virtually taken care of somebody. But I think more importantly than that, she starts out as being somebody who's lost her confidence somewhere. She's been in a marriage for a long time with somebody who's much richer, much older, much more "important", and she doesn't know what she doesn't know anymore. She's kind of beaten down, and in some ways, she's coming back to New York City to try and start the life that she left behind a long time ago, and her daughter's at that age where her mother's an idiot. And part of that process of a young girl growing up is to continually put her mother in her place, and continually put her mother down. It's part of how women evolve. They just keep one foot on their mum, and they just jump right up. So I liked that from the beginning of the film, you have somebody who absolutely doesn't know who she is, and through the course of the drama, learns that she does have all the answers, and that she if had listened to her instincts initially instead of being talked into this bad idea for all the wrong reasons, then you know, the bad things might not have happened."

Foster has two sons, one three and a half, the other 5 months, and laughs when asked whether she is looking forward to her own children thinking that their mother 'is an idiot'. "Fortunately, boys are a little different. I know with MY mum, it is just a really strange, complicated relationship too close, and it's like looking at an elephant through a microscope." As to whether she would encourage either of her sons to follow in mum's footsteps, Jodie admits that she "would try to be supportive of anything that he's excited about. I mean, the one thing I would say is that I wouldn't want to be involved in his career. It's something that HE should do, and then come home and feel safe to talk about it. But I wouldn't want to be involved in shaping it."

Foster was a mere two years old when she embarked on her career and it can be argued that she lost much of her childhood. She is adamant that she wouldn't want either of her children to start that early. "Fortunately, he doesn't seem to be showing any signs of interest. But you know, when they express it, it's usually around 7 or 8. If at that stage he was interested in doing little plays or going out there and trying to make commercials, I would say absolutely, but let's get somebody else to take you."

Foster has worked with many child actors, and she is evidence that one can easily transform from child to adult on screen. She won acclaim portraying a range of teenagers from the diverse likes of "Taxi Driver" and "Bugsy Malone" to "Candleshoe", "Foxes" and "The Hotel New Hampshire". Foster gained newfound recognition playing a rape victim in "The Accused" and Clarice Starling in "Silence of the Lambs". The actress remains philosophical on her own on-screen evolution, when looking back on her early work in particular. "I think when we look back on our childhood, all of us always think of it as somebody else; it's just a completely different place." But, Foster admits to having been " lucky to be around in the 70's, and to be making movies in the 70's with some great filmmakers which remains the most exciting time, for me, in American cinema, and I learned a lot from very interesting artists, as well as a lot about the business at a young age."

Perhaps it was that education that led Foster to produce films outside of her more mainstream Hollywood milieu, films such as "Dangerous Lives of Altar Boys", "Nell" and TV's "The Baby Dance". "I didn't have any ambition to produce big mainstream popcorn movies. Which weren't the movies that moved me when I was a kid. They weren't the ones that I cared about or the reasons why I got into the movies. It very often strikes me, I'll hear people say, you know, the reason I became an actor was because of "Star Wars" or because of "ET". Which is great you know, those were great movies. But the reason I became, why I wanted to be in the business was because there was "Midnight Cowboy"."

Foster is still hoping to shoot "Flora Plum", minus Russell Crowe, but she will crop up as a somewhat nasty nun in the upcoming "Dangerous Lives of Altar Boys". Foster is looking forward to not having anything immediately on the horizon. "I don't like to back everything up. I actually like being able to say at the end of this press junket: OK. I wonder what's next for me?"

Jodie also happily admits that she has no regrets about turning down "Hannibal". While she has since seen Ridley Scott's take on the story, she smilingly refuses to offer an opinion on the film.