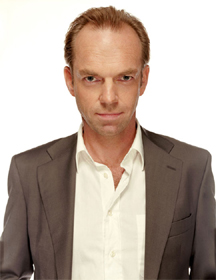 Hugo Weaving, sipping a cup of tea in a Toronto dining room in the midst of this years Toronto Film Festival, insists that it remains important for him to constantly work in his native Australia in order to feel energised. While he was here promoting the already acclaimed Little Fish for an impending North American sale, in which his harrowing portrayal of a drug addict garnered him a recent Australian Film Institute Award for Best Actor, the relaxed actor admits hes "into Australia. I guess I try to look for characters and scripts generally that appeal to me, that I immediately want to work on." While audiences will get to see a different side to the actor in the 2006 Hollywood blockbuster V for Vendetta, Weaving, star of over 40 films, says if given a choice, the smaller movie remains his preference. "Maybe it's just the way in which the filming is. I mean I do like working on smaller pictures and I feel more at home. I suppose I feel like it's more of a family unit and I think the filming rhythms are probably better for me, that you actually film faster, rather than dragging something out over months and months and months."

Weaving has always been drawn to characters far removed from his own experiences, characters such as the intense Lionel Dawson in Little Fish, a film U.S. audiences should be able to see early in 2006. "He's a long way from me but that again is something I don't necessarily think about but once the choice was made, then I thought Wow I've got a lot of work to do and there was a good deal of distance to go."

Weaving admits that while he enjoys doing the big Hollywood film, like a V for Vendetta, theyre by no means a priority. "I find those films like that, kind of give me time out with the family and I think if they weren't there for me, I'd probably just do another Australian film and maybe have a little bit less time out, I don't know." V for Vendetta, Adapted by Andy and Larry Wachowski, based upon the 1988 graphic novel by Alan Moore and illustrated by David Lloyd, the film is set against the futuristic landscape of a totalitarian Britain, and tells the story of a mild-mannered young woman named Evey who is rescued from a life-and-death situation by a masked vigilante known only as "V," played by Weaving. Incomparably charismatic and ferociously skilled in the art of combat and deception, V urges his fellow citizens to rise up against tyranny and oppression. As Evey uncovers the truth about V's mysterious background, she also discovers the truth about herself--and emerges as his unlikely ally in the culmination of his plot to bring freedom and justice back to a society fraught with cruelty and corruption. Originally, Weaving was not the star of the film at all and jumped in at the last minute, though ironically, he had been originally approached but was unavailable because he was due to start filming the ill-fated Australian film Eucalyptus. "Then that folded after they just opted for somewhere else and then 4 weeks into the shoot I was very surprised to get the call saying well look, we've actually sort of parted ways with James Purefoy. It was to do with animating the mask and they didn't think it was working. They just wanted it to be animated and it's difficult because it's a very fixed mask. You can't see eyes or mouth," the actor explains. 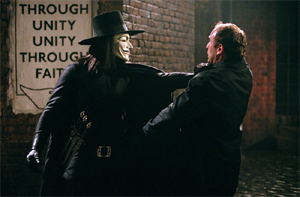 Not having read the acclaimed graphic novel and finding himself rapidly preparing to head to Berlin for principal photography, Weaving recalls "grabbing a copy of it as soon as I got to Berlin and I started to read it and I thought I don't even have time because I had to start work. And so I was working on my script and would then refer back to the graphic novel if there were certain things in the script which needed to be illuminated a bit more or which perhaps weren't, just to see what the original source was for particular points in the script." Throughout the film, audiences will never see the actors face, and Weaving said that playing the character in mask, "is a technical exercise, and then it became something slightly different so that was pretty interesting. Still I think we were still trying to go through a performance and that was very important because ultimately I realised, well the performance did start to bring the character to life, and initially I was thinking much more in terms of the outward effect and, well if I do this or if I do that. I mean the mask is still like that or that or if I do certain things and punctuate certain words with certain movements, then that will animate it. And it did to a point and then the more I did it, the more I forgot about those tiny little movements and the move the performance started doing those things for me."

Weaving says that in hindsight, it was an advantage to have had little time to prepare for this film, "or to have had three or four weeks mucking around with the mask with lights and just seeing what works and what doesn't, I think would've been probably ideal. Then you start and everyone knows where you're at." In trying to define his V character, Weaving sees him as "close to an avenging figure but he's also an heroic figure as well. On the one hand he's been abused by a government, tortured, abused, poisoned and burnt and he has a vendetta to kind of kill them all." Then, as he explains, into his life comes Natalie Portmans Evey Hammond. "He rescues her, imprisons her because otherwise she might unwittingly give him away and then they form a very close relationship." Weaving compares V for Vendetta with the likes of Orwells 1984. "It's like a number of different films rolled into one." Weaving relished the chance from going to the more character-based Little Fish to V for Vendetta. "Its always fun jumping from one thing to another, because it's so wildly different. You get to meet this very theatrical character but it's on screen. He's in a mask, he talks a lot, it's a completely fixed mask but he's talking a lot, which is a very audacious thing to try and put something like that on screen."

Asked whether it is likely that Eucalyptus, which was set to star Russell Crowe and Nicole Kidman, was likely to get made, Weaving remains pessimistic. "Everyone was sad about that film and it was totally obvious what was really going down. It was a terrible, terrible shame, particularly for Jocelyn [Moorehouse], as everyone wanted to work with her. It' was an absolute gem of a script, was just perfect."

Taking a break and preparing for Februarys press junket for V for Vendetta, Weaving says that his next project is likely to be for Australian television. "There's a project on the Bali bombing that Michael Jenkins is doing in Bali, a two-part television thing. Im set to play the head of the Australian Federal Police investigation team." Then Weaving returns to the stage, but not any stage. "We go to New York with Hedda Gabler, which was a Sydney Theatre Company production with Cate Blanchett. Itll be at the Brooklyn Academy in February and March." 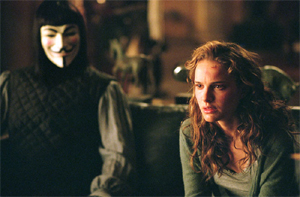