Helen Hunt As Good As It Gets 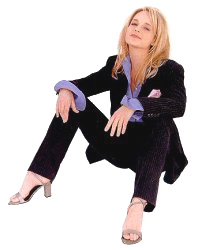 The Hunt is On: Off screen since 1997, Helen Hunt returns<

By Paul Fischer in New York

Helen Hunt's new millennium career comeback is up and running. Out of circulation and off screens since she won the 1997 best actress Oscar
for As Good As It Gets, Hunt has come back with a vengeance with roles in no less than four movies. Two are leads and two are strong support roles, from the alcoholic mother in Pay it Forward, to the glam advertising exec in What Women Want. Hunt also appears in the soon-to-be released Castaway, and disrobed for her art in Altman's Dr T and the Women. Hunt spoke to Paul Fischer in New York about her myriad of roles, as well as her attitude towards celebrity and acting.

Helen Hunt is an unusually good mood when we meet in New York. Absent from the big screen since 1997, Hunt is buoyant about the year 2000 and the four distinct roles audiences here will get to see the Oscar winner play and is relieved she that few years off to re-examine her life and career.

"It just felt time to take a few years off," she says. Her private life also went through upheavals. She married her long-time lover Hank Azaria and then split up with him this less than a year later. The media had a field day, but Hunt tries not to think of the celebrityism of her career. After all, she insists, Ms Hunt is actress first, star well and truly second. "I can't even say the word 'star'. I'm an actor and that's what I'm identified with and what I spend my time and energy with. You are what you think and you are what you do and mostly what I think and do is work, in terms of my profession, on my acting. I do this [press] very rarely and I don't read what is written, I don't ever look at those tabloid things, so if you don't see it, it's not in your world, except once in a while." No wonder she remains focussed on the work. "If there was anything in that 'other thing' [her private life] worth discussing I would, but there's nothing there except heartbreak, loneliness thinking of you or what's writ
ten, it's just a horrible feeling."

Meanwhile, in her public life, the risk was not capitalizing on her Oscar win, as all her advisors, agents, managers and friends suggested she do.

"Everybody around you says, 'But you've worked so hard to get to this point, what is your follow-up thing?' But you can't control whether something wonderful comes along after something like (the Oscar win) happens." Three years down the track and Hunt is back with a vengeance, proving her Oscar win was no accident. Next up is Hunt as romantic comedienne, starring opposite Aussie Mel Gibson in What Women Want. Here she co-stars as an advertising executive who gets the plum agency job that the ambitious, high living, babe-hunting Gibson had been lusting after. Meanwhile, there are romantic sparks made even more crazed by Gibson's ability to read women's minds. It is a gift (or a curse) that he gets in a freak accident involving electricity.

Hunt says that she loved the experience and change of pace the film offered. "It was fun, great fun. It's a soulful, heartfelt movie. It's about something and my character goes on her own journey. At the same time it's also buoyant and she (writer-director Nancy Meyers) wanted it to be like a 1930s romance, an honestly romantic movie." Yet there is also an edge, she adds. "These days, I don't think you can have a romantic movie and not have some darkness in it." One sequence does Ms Hunt dancing with a debonair Mr Gibson - though Mel had trouble on the dance floor. "He says that and that was true, but he's an amazing guy so he says he doesn't know how to dance, and he doesn't, then he does, because he works so hard, it's crazy."

Hunt next appears opposite another superstar - Tom Hanks - in the Robert Zemeckis film Cast Away. Again displaying her diversity, the actress plays Hanks' girlfriend, the one left behind when he has to play a real game of survivor alone on an island. What she decides to do when he disappears figures into the plotline. Though she admits the role "is strictly a cameo", she was drawn to this contemporary survivor tale because of director Zemeckis. "In Castaway, every choice that Bob Zemeckis made was made to get away from it looking like a movie. It just doesn't look like a movie, from the sweaters that we wear to how he shot it to the amount of music he's going to use or not use - it just doesn't feel like a movie. That was his medium."

But the part she relished the most was the single, alcoholic mother in Mimi Leder's Pay it Forward. It was her first meaty role since As Good as it Gets, and Hunt recalls being attracted to the material for a variety of reasons. "I was interested in the story, interested in working with Kevin Spacey and Haley Joel Osment, and I didn't quite see what a great part this was going to become. As I started working on it and changing it a little bit and expanding my vision of her, I started to realise that something was happening. Sometimes that happens to you and it takes on a life of its own and you start to realise that something interesting is going on."

In Pay it Forward, Kevin Spacey plays a social studies teacher who challenges his 11-year-old students to come up with an idea that will change the world. Trevor McKinney (Osment) decides to step up to the plate. His idea is a game called "pay it forward." In the game, every time somebody does a favour for you, you "pay it forward" to three other people. Surprisingly, the idea seems to work, helping his teacher to come out of his shell and reveal a dark past, and bringing his mother, Arlene McKinney (Hunt)--who works two jobs to keep their household afloat--new freedom.

Hunt related to this dark, tragic figure, because of her universality, the actress explains. "I feel she's like all of us, if you strip away every defence in the world. If I didn't have my ability to articulate a thought, or my vocabulary, if I didn't have a job that I could count on, financially; if I didn't have a blood sugar level I could count on which she doesn't because she drinks so much, I would probably be a raw nerve like that too. Her life is in pieces and so is she in the beginning and so you sort of strip everything away and a raw nerve." Again, Hunt plays a working class single mother as she did in As Good as it Gets, but was unconcerned at delving into similar territory. "Literally for a second I thought this was going to be like the same part and then I quickly realised it was totally different The character in As Good it Gets is a good mother to a fault and this one borders on abusive. Their ideologies and dreams are poles apart." Much like the roles that Hunt chooses. The actress is now busy
working on the new Woody Allen comedy, revealing nothing about the secretive director's project. "I'd have to kill you if I had to say anything", she says laughingly.

With her own production company, the 37-year old former child actress is hoping to launch her career as a director, once she finds a viable project. "I would imagine I would gravitate towards something that had no humour", she says tongue-in-cheek. "I'm certainly drawn to movies about relationships between people, that's my strong suit." Based on her current acting gigs, Ms Hunt is working from the best in the business, and THAT'S as good as it gets.