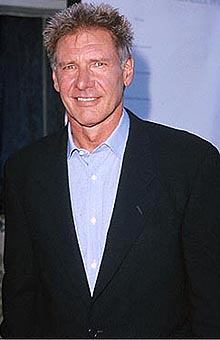 FROM THE HIP: A CANDID CHAT WITH HARRISON FORD

Harrison Ford makes it clear from the outset that selling his latest film, in this case the 1960s-set fact-based "K-19: The Widowmaker", remains his least favourite facet of the movie-making process. While offering his occasional cursory glance to the publicist, this quietly spoken of Hollywood superstars admits that he feels like an idiot "because I'm engaged in the business of trying to reduce years of work and months of dedication to giving definition and shape of something to little sound bites."

This despite his perpetual presence when it comes time for him to promote his work. "It's a part of what I do and there is profit for the film in my doing it. I mean we have the opportunity here to reach out through the audience and your fine outlets to bring the story of our movie to them and it's an advantage so I take advantage of that opportunity," Ford continues. Yet when the ferociously private star has his private life splashed over the tabloids, the actor fights back.

"It's very irritating that people come into your face, then mob you, invade your privacy and then tell lies and make shit up that is just impossible. There's no test of truth in the tabloid press or this proliferation of untested nonsense which is very hurtful to people", says an angry Ford. Yet as hard as he tries to ignore what the tabloids write, sometimes it's not easy, the actor continues. "I'd love not to pay attention to all of that, but the fact is that you have to be aware of what's out there. I do not do publicity but at the same time, it's also important not to play that game, which is to engage in constant sparring with the tabloids, so I walk away. But I want to know who I can sue when it is appropriate to take that kind of action. Normally they're just inside the line of what the law allows." In a rare, dryly humorous moment, Fords adds slowly, "No I don't have anybody to sue at the moment."

In a career spanning over a quarter of a century, the soon-to-be-60-year old actor, established himself as a true Hollywood icon, but refuses to acknowledge such a status. "I don't care about it," insists the star. "What I care about is that I have the opportunity to continue to work and that I have choices of good material that I can have some affect over the conditions under which I work and the quality of the material that I choose to work." Which is why, the actor concedes, he chose to go out on a loop choosing to play the flawed Russian commander of a nuclear submarine during the height of the Cold War in the early sixties.

Co-starring with Ireland's Liam Neeson, Ford's Captain Alexi Vostrikov is a stark departure from those iconoclastic heroes with whom the actor has been long associated. The script came along at about the same time as he decided against reprising the role of Jack Ryan in "The Sum of All Fears", and has no doubt, why he preferred to embark on the riskier "K-19", which he also took on as a producer. After all, he insists, "the object of an actor is to continue to play different kinds of roles and for me in different kinds of films. It's what both amuses and engages me as well as offering me the chance to do something different for the audience. I'd be finished long ago if I continued to do the same thing over and over again."

The prevalent anti-nuclear theme of "K-19: The Widowmaker" was also of interest to the actor, whose political activism is well known, sadly admitting that while the Cold War is long gone, we have learnt nothing in the past four decades. "We haven't learned anything in 2000, just the same old shit but practiced on a different scale and with different groups of people. Self interest is the motivation of all kinds of idiocy and perfidy and whether it is practiced on a personal scale or a national scale it's what leads to conflict." In addition, conflict, adds Ford, in trying to relate this back to his movie, "is drama and drama leads to movies and hopefully we're back there".

Yet trying to capture Ford the human being is, as he himself admits, tough in a 20-minute interview. After all, one suggests, audiences presumably feel that Ford the star and the man are one and the same and audiences see a conflict in both. Not Ford, however. "I don't feel the conflict. I'm just happy to have the opportunity because of the success of the films that I've been involved in to continue to do my job. It's not surprising to me that people mistake the person that I am for more experience with me which comes in this dramatic setting; it happens to everybody."

Harrison Ford may be approaching 60, albeit a still youthful and tanned 60, but 60 nonetheless. Once quoted as saying that he is 'still wrestling with the same frustrations and problems' as ever, the actor takes a simple and pragmatic perspective on his milestone birthday. "I don't look at my life at the decade mark and make any assessment. It's a day-to-day thing. I feel good this day or I don't feel good that day. I sometimes think that I'm an idiot and sometimes I think I'm the smartest guy in the room. It's constantly changing," Ford says with a slight smile.

The day we spoke, he admits he was feeling more the idiot, especially when reminded that even at age sixty, he is still voted the sexiest man alive. "Oh that makes me so very, very happy," he adds, with more than a tone of sarcasm.

As to the future, depending on who you talk to, there is most likely going to be a fourth Indiana Jones movie. Ford remains noncommittal. "If there's a good script and we all agree upon it, we'll do it, but right now there's NO script so whether or not I do it depends on the script." As to the recent barrage of criticism that Ford, who will be well over 60 by the time cameras roll, may be too old to be playing action hero, Ford hits back. "I don't understand what that means: Is Indiana Jones somehow immune from aging?"

Next up, Ford returns to the cop genre in the new Ron Shelton-directed thriller, which he says, will contain some comic elements. After all, as stoic and serious as he is, Ford is not without a sense of humour even though he loves to pretend otherwise. As a prime example, when reminded that even while shooting "K-19", he apparently made use of someone's fart machine in between takes. Without missing a beat, Ford says: "That doesn't sound like me, does it?" No indeed, Mr Ford!