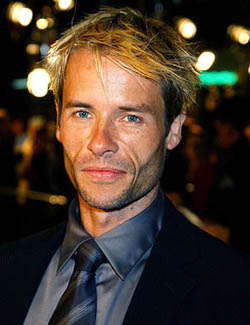 There is something ironic about Guy Pearce's starring role in the sci-fi adventure "The Time Machine" - the original classic film, made in 1960, also starred an Australian who was beginning to take Hollywood by storm: Rod Taylor. Pearce, who had literally just flown into Los Angeles from his homeland, laughs at the irony. "Maybe it's something about Australians not wanting to be happy with where they are and their insecurity complex is the thing that drives them," he smilingly notes. It was the original George Pal film that partially led to Pearce's decision to step into Rod Taylor's memorable shoes, he adds. "Being such a fan of the original was certainly a factor, as well as getting back to the child within oneself was also something I found quite appealing, really, because this is not normally the kind of film that I would be drawn to doing."

Though Pearce had never read Wells' novel, he was drawn to the themes of the 1960 version of the story, responding to "that notion that as human beings you tend not to want to concentrate on the present moment. We would always rather fantasize about the future or dwell on the past, or actually allow ourselves to feel anxious about what possibly could happen in the future, or dwell on the sort of negative things that have happened in the past. That's just our ego trying to create some sort of identity for ourselves. We allow guilt and fantasy and all those kinds of things to identify us, when really we would do ourselves a much better service if we could actually just exist in the present moment."

Guy concedes that this is a philosophical perspective, that he probably didn't have when he was 8 years old watching "The Time Machine" back in Australia, "but that whole notion of turning those fantasies that we have about wanting to go somewhere in the future, or wanting to go into the past into a tangible prospect, is just the most fascinating concept in the world." Pearce says that when the script to "Time Machine" came along, "it just brought back a great deal of memories for me in regard to what affect it had on me when I was a kid. I guess I sort of had to think about what affect this film would have on kids in this day and age, and perhaps kids in the future as well. It comes from the child within me, and I guess that allowed me to let go of some of the precious aspects that I have whenever I usually go to make a film, and go, 'well this could be fun, why not?' "

Pearce, who was sporting a blonde-bleached hairdo from his recent stage production of "Sweet Birth of Youth" in Australia, sees it important to be as creatively divergent as possible, be it returning to his theatrical roots, starring in independent films such as last year's critical favourite, "Memento", or indeed switching to bigger studio films like "The Count of Monte Cristo" and "The Time Machine". "I always like to think that I could be as credible in any role that I do, whether it's a bigger studio picture or an independent picture. Essentially what I'm drawn to is a story and what the character's experience is throughout that story, and whether or not it's a bigger film or a smaller film doesn't really play into the picture to me in choosing a film as such. I mean it was definitely an interesting decision for me to choose to do "Monte Cristo" and "Time Machine". I was aware, obviously, that they were big studio films, but "Monte Cristo" is a classic and "Time Machine" is a kind of unusual studio picture in some ways."

Pearce wants to continue being as diverse in his choices as possible, although he admits that he will "probably run out of things to do and end up finding some little bland road down the middle somewhere", he concedes laughingly. "But maybe if I do, that'll be the time to stop."

As much fun as he had working on the multi-million dollar "Time Machine", one can't help but feel that the acclaimed actor still prefers the comparative intimacy of small films, such as the upcoming Australian features "Till Human Voices Wake Us" and "The Hard Word", in which he stars opposite Rachel Griffiths. "I think the purity of the story and the purity of perception within the structure of making a film is something that I'm inspired by, and that's something that is far more prevalent in those smaller films, because you have far less money, so you have to all stand around and make sure that you come up with good creative ideas, rather than saying, well just shoot it both ways and we'll worry about what the test screening audience says later and then we'll make a decision. I find that difficult to deal with, it kind of makes me lose my footing and I don't know quite what film I'm in. Whereas, obviously the purity of creativity and inspiration that one is faced with when doing a smaller, independent film is really inspirational and fantastic."

If "Time Machine" is a blockbuster, Guy happily admits that he'll be able to do more of those smaller films. He certainly remains grateful to Curtis Hanson for casting him in L.A. Confidential, the film that really introduced to Pearce to the world. "Curtis had good sense to do that", he laughingly concludes.