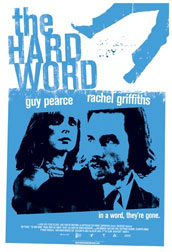 GUY GOES FROM LACONIC CRIMINAL TO PLAYING WITH TIGERS.

For Guy Pearce, the big bucks might be with Hollywood biggies, but this is one actor whose best work is back in Australia. The Hard Word may have come and gone back home, but are Americans ready to embrace this hard-edged, frank and very Aussie approach to the crime genre? The actor thinks so. In this exclusive chat with Paul Fischer, Pearce talks about that film as well as his participation in the latest cinematic oddity by Jean-Jacque Annaud, Two Brothers.

Guy Pearce was in a good mood at Hollywood's Mondrian Hotel. Here for a brisk visit to talk up the long-awaited US release of The Hard Word, the 35-year old Aussie is unconcerned that his latest film, the energetic, dryly comic Australian film The Hard Word, will travel beyond its laconic Australian shores. "I don't necessary think that it wants to travel, but I think that it does and that is obviously great," says the upbeat actor. "I think that it will be the confidence of its 'Australianness', rather than it s being generic. I mean obviously things will travel if they are not generic for obvious reasons." The film revolves around brothers Dale (Pearce) Mal (Damien Richardson) and Shane (Joel Edgerton) who are hardly out of jail when they're into their next robbery and as usual, no-one gets hurt. Their lawyer Frank (Robert Taylor) is part of the finely tuned criminal system, as are some bad cops like O'Riordan (Paul Sonkkila) and Kelly (Vince Colosimo). But then greed and sex in the shape of Dale's wife Carol (Rachel Griffiths) - fire up people like Frank, who knows where the once nice 'n easy business will end. Guy says he was drawn to that character because "I liked the humour and this character's cleverness. I liked thatambiguous kind of morality, where on the one hand these guys weren't intending to hurt anybody, which is kind of Australian in that he kind of represents the underdog. who is being repressed by the authorities. But I loved the general tone of the film which has an Australian sense of humour."

The Hard Word is a far cry from Pearce's last movie, The Time Machine, and the actor admits he happily notices the difference when jumping from the smaller films he loves, to big Hollywood blockbusters. "because I come from the small film world, rather than from the big film world, so doing something like Hard Word feels more natural really, where you actual get rehearsal." He clearly has a preference for doing an Australian movie, he says, because "it is the culture that we know. and grew up in. It's embedded in ones psyche and so it's more interesting to do an Australian film while doing an American film is more of out of curiosity for me."

Yet at the same time, Pearce won't step into an Australian film for the sake of it. "People keep saying to me that you feel obligated to do work in Australia and I'm like no. Yet it needs to be something that really means a lot to me. I've just done things that I didn't really believe in entirely that is just not good for anybody."

He may well be referring to some of the Australian films he did before he dressed in drag to join Priscilla, Queen of the Desert. Before Guy found international fame through Priscilla and L.A. Confidential, he was a struggling actor on TV soap operas and such forgettable films as Hunting, Heaven Tonight and Flynn. At that time, Pearce says laughingly, he had no idea that success was a likely reality. "I don't ever remember what I thought of the future, really. I felt a little overwhelmed and I have gratitude for getting work back then but I didn't, feel confident enough. Not that I ever thought that I WOULDN'T work in the future, but I was just a bit blind really, to just see what happens I certainly wasn't ambitious or anything but I definitely had ambition. I just was really more interested in song writing and I still am", says Pearce. Pearce still dabbles in song writing, but just for his own pleasure, he adds. "I do not really want to necessarily go on that professional route, because of all the cynicism about the various other actors in the world that have done it. All we need is another Neighbours star hitting the road", he says laughingly, referring to of course Kylie Minogue, who began it all. Pearce remains passionate about his acting, and recently completed work on Jean-Jacque Annaud's Two Brothers "He's a unique individual," says Pearce. He says shooting on location in Cambodia enhanced his experience working on the film. "It was really a bizarre experience." But managed to spend some time in Cambodia which he fell in love with "because of the history. And despite their history, the people, who are so poor, remain warm and forever smiling. Plus the country is beautiful, as is the food "

Guy says he's now eager to return to his Melbourne home and take a break "which is great with me because that means I get to get back to the studio."