Give Me A Chance 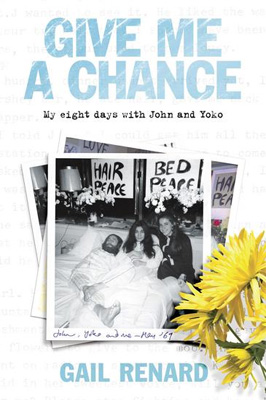 Give Me A Chance

A true account of one girl's experience of the John Lennon and Yoko Ono bed-ins for Peace against the Vietnam War, complete with photo memorabilia. A must-have for every Beatles fan - young or old!

May 1969. As a sixteen-year-old, Gail Renard joined John Lennon and Yoko Ono in their week-long bed-in for peace in a hotel in Montreal, Canada. She looked after Yoko's five-year-old daughter, helped to find tambourines and joined in the first recording of "Give Peace a Chance" with Timothy Leary, Tommy Smothers and various other celebs. John looked after her - sending her home every night to her mother who had spoken to him on the phone and insisted that there were to be no drugs or sex while her daughter was around. It was John's faith in Gail's ability which directly lead to her later success as a writer, and he helped her to secure her first paid submission - an interview with him for the Beatles' magazine.

Gail Renard has written extensively for children's TV and won a BAFTA for the BBC comedy drama Custer's Last Stand up. She has also written adult comedy for C4 and ITV and has just completed her first stage play. Gail was brought up in Montreal, Canada, but moved to England, where she still lives, in her early twenties.