Find Nemo and the Tank Gang at the Melbourne Aquarium 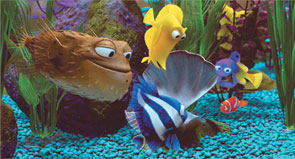 Now unveiled, Walt Disney & Pixar Animation Studio Films have donated a special exhibit of the 'Tank Gang' to the Melbourne Aquarium in conjunction with the release of Finding Nemo on DVD and Video.

In the movie, Nemo, a young clownfish is taken from his Great Barrier Reef home by a diver and is unwillingly relocated to a dentist's office aquarium. the aquarium is home to the 'Tank Gang', a diverse bunch of sea-life characters that soon become Nemo's allies, helping him in his quest to escape back to the ocean and to his father Marlin. 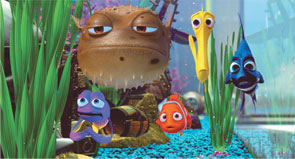 The exciting new exhibit, means that young and old alike can come face to face with a real clownfish and many more of the comical 'Tank Gang' in the film, such as Bloat, Bubbles, Deb, Gurgle, Jacques and Peach.

The aquarium has been designed and recreated in a unique television inspired aquarium. The newest attraction of the ' Tank Gang' have been replicated by the Melbourne Aquarium curatorial team. So come and see this fantastic new display at the Melbourne Aquarium, Cnr Queenswharf Rd and King Street Melbourne.

Finding Nemo is now available to own on DVD and video at all good stockists.