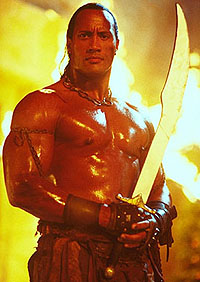 BETWEEN A ROCK AND FATHERHOOD

The Rock/Scorpion King Interview by Paul Fischer in Los Angeles.

The Rock - a.k.a. Dwayne Johnson - is beginning to make that seamless transformation from sports to movie stardom? Perhaps a worthy successor to Arnold? Based on early reaction to his starring role in the tongue-in-cheek period adventure "The Scorpion King", "The Rock", movie star, is a foregone conclusion, writes Paul Fischer.

You would think "The Rock" had been meeting the press all his life. Charming, unpretentious and seemingly oblivious to the level of stardom the ex-Dwayne Johnson has attained, "The Rock" now adds another role to his broadening repertoire: Father. No wonder the wrestler-turned-actor was in a good mood when we met as he begins to reflect on the seriousness of fatherhood. "Being a parent makes you selfless, in a way," he says. "You start to base your decisions in terms of how it will affect your baby."

Those decisions include the kinds of movie offers he looks to. "I'm working on a new movie with Universal at the moment and in reading the script I want to ensure that all the elements are responsible, and not something that I'm going to be embarrassed about, so that six years from now when she's able to watch a movie, there won't be gratuitous love scenes", unlike those in the family-friendly "Scorpion King".

He is just getting used to fatherhood. After all, his daughter, one Simone Alexandra Johnson was born just last August 14 to his wife of five years, Dany Garcia, a financial planner. "The Rock's" parenting duties are far more hazardous than any wrestling foe, he quips. "My, friend, I can change diapers with the best of them, be it poop diapers or pee diapers," he laughingly adds. One would imagine that trying to balance his busy schedule as wrestler, actor and now father, is also challenging. "I'm just trying to be a responsible parent and trying to balance TWO careers at this point and being a good dad, so it gets difficult, but I have some good family support and good people around me to help me and make it all easier both for me and my wife."

"The Rock" has been a part of the public consciousness since he began professional wrestling in 1996. Three years later, while he was hot, the then wrestler began to act, showing a strong comedic side as well as a penchant for drama. It is more the former that is on full display in "The Scorpion King", a rousing comic book adventure yarn set in Ancient Egypt.

Inspired by the legendary Egyptian warrior, "The Scorpion King" is set 5,000 years ago in the notorious city of Gomorrah, where an evil ruler is determined to lay waste to all the nomadic peoples of the desert. The few remaining tribes, never natural allies, have to unite or perish. Knowing their enemy relies on the visions of a sorcerer, they hire a skilled assassin, Mathayus (The Rock), to eliminate the visionary. After infiltrating the enemy camp, Mathayus discovers that the sorcerer is in fact a beautiful woman (Kelly Hu). Rather than eliminate her, he takes her deep into the desert badlands, knowing that the ruler's henchmen will stop at nothing to rescue her and bring her back. Seriously wounded in the ensuing battle, Mathayus must find the strength to lead his scrappy band of allies back to Gomorrah for a final confrontation.

With "The Rock" and company clearly winking at the audience throughout the film, it is clear that he had a great time making his first major movie. "I had a blast, but I also put a lot of heart and soul in the movie" which he saw with the press the night before its Los Angeles press junket. He was there, sitting at the back with fellow cast members, to see for himself, the first public reaction which was genuinely enthusiastic, to say the least. "I was really happy, and I'm really critical of myself and my performance because I didn't have anything to gauge it by," he says. Unlike "The Mummy Returns", there was no Egyptian dialog to hide behind, "so he relied on [director] Chuck Russell "telling me that I was doing a great job or [co-star] Kelly Hu telling me: You're doing a great job." "The Rock" had to judge for himself, "so I snuck in looking around, and it's very gratifying to see the work come to fruition, and even more so to see the audience react."

One of the loudest reactions occurred at the conclusion of Rock's first major love scene. It would be fair to say that the crowd went wild. "I never anticipated the big cheer after it was done," he says laughingly. "The Rock" admits to having been reservedly comfortable shooting what was quite a long love scene, half-naked and all. "My only concern and trepidation came in the audience, because I know how I am. I don't always get too excited to see the action guy kiss a girl for some reason," he says with a degree of self-mockery. "Sometimes it can be too gratuitous, especially in this day and age where nothing's left to the imagination. Love scenes can also take themselves too serious, when they're 'doing it', "he adds laughingly.

There is a consistent sense of good fun that is the tone of "Scorpion King", and Rock was hoping that the humour, at which he was striving, would filter through in the final result. "I knew what was funny to ME," he explains. "A lot of times, what's funny to me or you is not funny to somebody else, so I was hoping it was going to be funny, but I didn't think it would be THAT funny, and watching, I didn't think that the relationship I had with the little boy would be as funny as I thought it was, there were some funny parts with me and the little boy and the relationship with my sidekick, so that was great."

"The Rock" takes his acting seriously, and in preparation for his first starring role, he worked with renowned Hollywood acting coach Larry Moss "who helped me tremendously with the script, the scenes and putting me in those moments where at times there was a little bit of poignancy involved."

As for those inevitable comparisons with one Arnold Schwarzenegger, "The Rock" [who still delights in doing his Arnold impersonations], is flattered but plays down those similarities. "I think the comparisons have been great, and obviously Arnold's done fantastic. His shoes are a little big, though, to fill, and I kind of prefer just to make my own path and do my own thing, because we're completely two separate guys, not just by age." There is no rivalry between the two superstars, who remain close friends. "We and Sylvester Stallone have been friends now for some time, both of whom have been really supportive of me, which they didn't have to be, you know what I mean?"

As "The Rock" begins to enter that new world of movies, the time will come when he puts aside his wrestling persona for Hollywood. But first, he wants to make an impact in film "and continue to do responsible work that entertains. As my roles increase in film, and I do more and more projects, and my roles lessen in wrestling, then I can see that happening one day, because balancing both is tough."

But "The Rock" is relishing this world of Hollywood just the same, and like so many other movie actors, he is fulfilling a childhood fantasy. "I've always been a big fan of film, and I always wanted to act one day but never knew how I was going to get involved in it. I never fathomed the success; I never fathomed that I would transcend from wrestling into acting. I just thought: Oh, I want to be an actor one day." "The Rock" is still juggling his WWF commitments to his new found film career, and is currently working on a new film. "It's a contemporary 2002 today action comedy set in South America. The working title as of now is called "Helldorado" and I think will be a lot of fun."

Now that he has succeeded in both arenas, "The Rock" has learned how to cope with superstardom, admitting that "anonymity suddenly goes out the window, especially for me. I try to wear hats, but it doesn't help," he quips. Seriously, he hates the whole idea of superstardom as a label. "I just hate the self-serving: You know, I'm a superstar, thing and I don't get it when you actually think of yourself as a superstar or any kind of star. It's so ridiculous."

So "The Rock" keeps his life real and in check, "by going to Dunkin' Donuts every week which I've got to have, not to mention my pizza."