Doc Neeson Returns to the Stage with a new Album 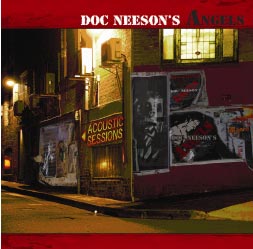 DOC NEESON RETURNS TO THE STAGE AND ANNOUNCESNEW ALBUM RELEASESeven years ago, doctors told Doc Neeson that he would never perform again after surviving a horrific car accident. The accident, in which he was rear-ended by a truck, resulted in Neeson suffering whiplash and spinal injuries. Neeson refused to succumb to his injuries, has fought his way back and is about to hit the road and perform with his band Doc Neesons Angels.

Acoustic Sessions covers the breadth of The Angels outstanding career and features beautifully treated new acoustic versions of all the big hits including the anthems 'Am I Ever Gonna See Your Face Again' and 'No Secrets'.

The album signals a step in a new direction for a band who are traditionally known for their hard rock. The intricacies of the acoustic versions of the songs, reveal beautiful lyrics in arrangements that have not been heard before and will impress the most dedicated fan.

Recorded in Sydney in July 2007, the album was produced by Tim Powles (The Church, Stella 1-11, The Divinyls, Rose Tattoo).

The second half of 2007 is a busy one for Doc Neesons Angels. They will hit the road in August/September for the national Countdown Spectacular 2, release Acoustic Sessions in September followed by an acoustic East Coast capital city tour. Next they will perform for the troops in the Middle East and then embark on a regional tour of Australia.

Acoustic Sessions will be released by Liberation Blue on 1 September.