Sitting in a corner in one of the many spots selected for interviews at Sundance, Dennis Quaid, Sarah Jessica Parker and Thomas Hayden Church are like a trio of infectious school kids. Trying to decide who should sit where during our interview, Sarah Jessica Parker seems to take charge, until Dennis Quaid laughingly suggests to Ms Parker "You need to sit to his right in order to exude your sexuality." One could tell it was going to be one of those days. Despite the intensity of Sundance, the three stars of Smart People - a smart comedy about communication or the lack thereof - are in a good mood, clearly. Perhaps the three of them rub off on one another, or they are basking in the glow of the standing ovation the film had the night before, but when it comes time to talk about working on this Indie project, their faces light up with genuine enthusiasm.

For Dennis Quaid, next seen in the more mainstream thriller Vantage Point, almost turned Smart People down, though he liked the script when he read it. "It's the only time I really had a chance to have a first time experience like an audience member would with a piece, especially that first reading, for me, if you really kind of feel the story, and feel the overall thing, rather than just focusing on my particular character." His character is an emotionally closed university professor, closed off to his students and family since the death of his wife. Dennis Quaid says he "identified with him emotionally in some ways, in terms of where he was. I think I had been at different times in my life, to a certain degree, more or less, sort of emotionally stuck, or shut down. But that was where it really kind of ended, as far as really where I didn't really see myself in the part." It was at that point, early on, that he made up his mind to turn it down. "I thought it was really well-written. It was really great, and I took the meeting with Noah, to say, 'Thank you, but you know, why do you see me playing this?' I thought, 'I don't get it. I really don't get it at all.' "

But Dennis Quaid changed his mind after meeting director Noam Murro. "What we talked about is Brad and Angelina, but we just talked about favourite movies and favourite directors and just talked. I just thought he had such a really unique kind of point of view of life, and the world, that I got really intrigued about working with him."

For Sarah Jessica Parker, who just wrapped on the very secretive Sex and the City movie, it was the script, not the character that attracted her. "but I was also thinking that I would probably say yes to any part in a good script and I think certainly the size, and how it fits into the story time wise kind of just doesn't really figure into the equation," commenting on Dennis Quaid's concerns that he didn't feel he was right for his role. In Smart People, Sarah Jessica Parker is a former student, now doctor, who finds herself attracted to Dennis Quaid's character despite her own emotional unavailability. "It's really a good script It which is such an influential thing. It's everything and I came in very late to this, and both Dennis and Thomas had already been cast and just days away from shooting. I just really loved the story and I loved that I had never played a part like this before." As with Dennis Quaid, Sarah Jessica Parker found it difficult to identify with her character. "She just operates and functions very differently. I mean, her past is very different including her younger years, her choice to pursue a life in education, her resolve about how people should be, how she should be, which is, of course, so much hooey. I would like to have a little of her withholding nature some time, but it's just simply not who I am. There's a lot I admire about her, but I don't relate to her, but I really liked playing her." 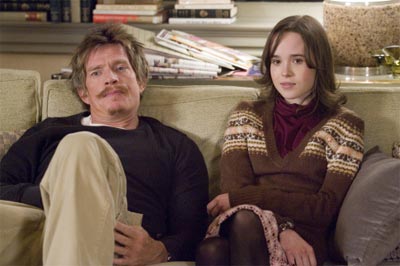 Thomas Hayden Church co-stars as Dennis Quaid's adopted brother who moves into his house, disrupting both his own life and that of the highly intellectual older daughter [Ellen Page]. Thomas Hayden Church laughingly insists he has nothing in common with the irresponsible fictional character. Thomas Hayden Church says the obvious comedic moments for were easy, the digging for an emotional truth was more challenging. While the actors may not have been able to relate to their characters, Dennis Quaid relies on himself to find the character to play. "I think every actor always winds up playing a part of himself. You never really get away from yourself, so you've got to find somewhere inside of yourself that you've had this kind of experience. " Sarah Jessica Parker, however, relies more on the script to find her character. "I think the script can be enormously helpful, and I don't tend to look outside to others, because it distracts me. I remember, I used to hear stories about a director saying to a small child to try to get him to cry, 'Imagine that your dog has just been killed.' I don't have a real technique. If I start doing that, I'm actually not really thinking about the character, but when a script is really good, you just have to think about how a person that this great writer has created, would feel, even if it's foreign to yourself or if it's something you don't relate to, or even don't find very likable, or you think is not decent or good. I like very much thinking about how people feel, and why they feel that way and I think good scripts allow you to do that without trying to find it outside, in a person that you may or may not have met. I mean, it's helpful sometimes, but it's not always - for me, necessary."

Despite their high profiles, all three actors yearn to return to a seventies Hollywood sensibility when more character-driven stories were the norm. "That's where I really wanted to become an actor, was because of movies that were made in the '70s," ponders Dennis Quaid. Films that were quirky, they were off, like Scarecrow or Cuckoo's Nest. It wasn't exactly a commercial film, but everything came out of character and situation."

Sarah Jessica Parker agrees that there was a time when "there were so many adult movies. I mean, my parents used to go to the movies all the time. It was a treat, but there were a lot of really, really smart, adult movies and that, to me, in my recollection, is what ruled cinema. It wasn't the reverse. The exception wasn't a grown-up movie." Thomas Hayden Church finally adds that Hollywood's formula is very specific. "Sarah said something in another interview that I thought was quite intuitive about how the studio movies are made, which is, it's a process of reverse engineering. Let's first and foremost, let's have very likable characters and then let's put them in a situation that ultimately is gonna deliver happiness or some sort of grand emotional reward, which may not be happiness, but it's pretty close to happiness. And the studios largely go at the creation of entertainment with that process in mind. Whereas with a movie like Smart People, which is clearly character-driven, is a micro-study of the changing course from moment to moment of anybody's emotional evolution. It's about how a guy, like, a university professor can deconstruct moments that are not necessarily in the interest of self-destruction. But in the larger picture, everybody is clumsily and at times grudgingly trying to just get anywhere other than where they are. And that right there, just almost by design, creates a movie that becomes a success by accident. Dennis Quaid has been describing the movie as a human comedy, but it really is a movie just about the micro-changes of human experience. And you know what? What's commercially viable about that, other than how real and recognizable those characters are moment to moment?"

As for the future Dennis Quaid has Vantage Point and Sarah Jessica Parker has of course Sex and the City, which we refer to as "the unmentionable film" but is nervous about the pressure that film is creating. "But it's a fun kind of pressure."

Smart People is the darkly comic story of Lawrence Wetherhold (Dennis Quaid), a widowed, acerbic, and self-absorbed literature professor who has alienated his son and turned his daughter into an overachieving, friendless teen. He falls for Janet (Sarah Jessica Parker), one of his former students; at the same time, his ne'er-do-well brother (played by Thomas Haden Church) unexpectedly shows up at his door, low on cash and needing a place to stay. Suddenly, Lawrence's well-thought-out, though not well-managed, life comes crashing down on him. All the intelligence in the world can't unstick his life.

Sex and the City - www.femail.com.au/sex-and-the-city-book.htm