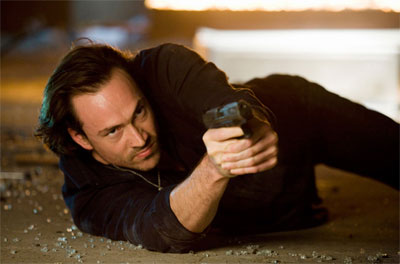 Chris Klein and I first met when he was promoting the second American Pie film, more years ago than either one of us can remember. Now at 30, the actor is hoping to reach a different demographic with his self-deprecating, cocky cop in Thailand, on the trail of a nasty property developer, in the new Street Fighter: The Legend of Chun-Li, which reinvents the popular video game franchise initially filmed over a decade ago with Jean-Claude van Damme and Ming-Na as Chun-Li. Chris Klein hopes that this film could be the beginning of a brand new franchise and is oh so serious about the possibility, as he explained to Paul Fischer in this exclusive interview.


QUESTION: I guess Street Fighter: The Legend of Chun-Li is a slight departure for you, doing this kind of fun, kick-ass action movie. What was the attraction of this?

CHRIS KLEIN: You know, for me, it was absolutely that, an opportunity to play a fun and gun character and to also be a part of an incredible franchise, that spanned two decades. On top of that, I really respect Hyde Park Entertainment, who put this movie together, and the cast that they had at the time, Kristen Kreuk as Chun-Li, I thought that was just absolute genius casting, so I jumped aboard.


QUESTION: How much preparation do you do for something like this? Do you just dive in, or do you work a lot before?

CHRIS KLEIN: You know what? On this, besides rehearsal time, which was crucial - because we really wanted to get the emotional depths of the characterizations correct, so we worked very diligently on that. And then the gun training and the tactical training that I was part of, I wanted to make sure that I was very adept at that, walking into this, because Charlie Nash is an American Interpol Operative. He's a superstar with a handgun and that's a skill that I don't quite have in my own personal skill set. So it was very important to be able to learn how to do that. So all in all, we were in bootcamp for about five weeks.


QUESTION: He's also a very kind of cocky, self-assured kind of guy. Could you identify with any of that aspect of him?

CHRIS KLEIN: Oh, man. I - you know, I had a lot of fun doing that, because you know me, man. I'm kind of shy when it comes to all that kind of thing. So it's always a lot of fun to play a fun and gun character and I think for the most part, what comes across in me that's similar to Charlie Nash is that we both love our job. 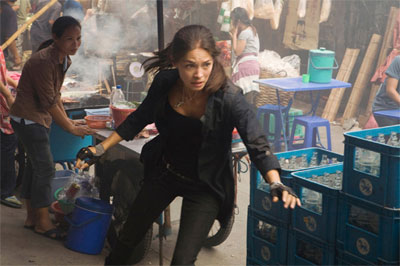 QUESTION: It's interesting that you talk about your shyness, because it's true, you are - I mean, over the years that we've known each other, there is definitely a shyness within you. And I was wondering if doing a movie like this is a way to get over that. It's a way to - to really come out of your shell, as it were.

CHRIS KLEIN: No, that was never part of the conscious decision to take on this character, in this movie. For me, the action-adventure genre has been my absolute favorite genre of movies, as a fan of movies. It's my favorite genre. And it's the genre where all my heroes come from. So to have an opportunity to participate in that genre - and not necessarily pay homage, but definitely appreciated what the actors that I look up to were doing at the time, to be able to do it this time is very exciting for me.


QUESTION: Now, with this movie, geography is a crucial element to this film. How much fun was it, working on location?

CHRIS KLEIN: Working in Bangkok, Thailand, and to have the opportunity to work in the actual place that your story takes place, is a very special, incredibly rare opportunity. You know that most stories taking place - you know, it could take place in Kansas, and you're shooting it in Calabasas. New York City could be Toronto, Canada. So, to be in the actual spot that your story takes place is the absolutely practice of environmental theatre. And you're right, Bangkok becomes the third or fourth character in all of the scenes of our movie. And, I believe, a real integral part of the way this picture turned out.


QUESTION: Now, do you think if the opportunity presented itself to do a sequel, to do another Streetfighter movie, would you be up for it?

CHRIS KLEIN: Oh, hell yeah. The opportunity to be involved in something that becomes a franchise is always a special opportunity, but it's too early to tell. You know, right now, our goal is to tell a really fascinating origin story about one of the most famous female video game characters in the history of video games. I think we pay homage to her, and to her character. I really think the - both fans of the video game and fans of the action genre are gonna get a true charge out of this.


QUESTION: So many video game movie adaptations really do not work very well. What do you think sets this one apart from the rest?

CHRIS KLEIN: I think what sets this one apart is, right from the get-go, we separated ourselves from the video game. The video game is not an origin story, and it's not a role-playing story. It's a one-on-one, fighting action video game. Our movie is about just a couple of the characters that inhabit the world of Streetfighter. So what we do is, we take away all the kick-ass action and fighting elements of the Streetfighter game through history. And we add emotional depth and characterizations to the characters. And that's what sets us apart. Most video games are role playing video games, so that every single fan or player of that particular video game has a frame of reference about the role of the main character. And Streetfighter, the video game, the fans of that video game don't get that opportunity, so we're giving them the opportunity to see the origin of these characters, in our movie, so we're helping add personality to their favorite characters in this video game. 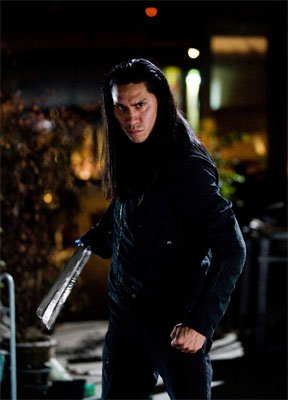 CHRIS KLEIN: You know what? I'd say, over a career that is now over a decade old, you're very right. The ups and downs, goods and bads, ins and outs - and you know, I'm turning 30 in March, so I definitely think that right now, I definitely feel the most open and the most creative that I've ever felt. I think a lot of that has to do with life experience. I think a lot of that has to do with turning 30, and the magic that is turning 30, that everybody talks about. I also think that it's just a case of growing up. You know, I'm always one that never wants to stop growing. Never wants to stop learning and never wants to stop striving for artistic fulfillment whatever that is. Whatever genre, whatever role, whatever medium, it doesn't matter, I love to be a storyteller, and I love to act in the stories that I tell. So to be able to do that for as long as I have only makes me want to do more.


QUESTION: Would you ever go back, if it was ever asked, to do one more American Pie movie? I know there have been rumors that they might try to do one more film with all of you guys back together again. Would you rule it out, or do you think it's really done now?

CHRIS KLEIN: You know, listen. There have been a few incarnations of that title, with the different casts. But the first I heard of an America Pie where they would bring back the original cast, was just today when one of the people in one of the round tables brought it up. I certainly haven't heard anything about it. But, listen that goes right in line with how I feel about a franchise. To be a part of something that has touched so many people on so many levels, is so special, you know? As an actor, you put your stuff out there for people to see and appreciate the emotion and react to it. And they certainly did, with that franchise. So of course, that's something that I'll hold as the highest honor of my professional career, always.


QUESTION: So, what else is coming up for you? I think you've got a couple of things in the pipeline, haven't you?

CHRIS KLEIN: Oh, yeah, man. There's always stuff going on. But I gotta tell you, right now I'm so moved and excited by the idea of Streetfighter. I want to leave it there. This is what it's all about, man, until February 27th. That's all I'm focused on.


QUESTION: What about The Six Wives of Henry Lefay.

CHRIS KLEIN: That'll be coming out. You know, we shot that movie two years ago. And that's been - that's been brewing for a very long time. It's a Tim Allen vehicle, and I hear he's really funny in it. I haven't worked on that movie in over a year n a half.


QUESTION: And you haven't signed up for anything else, I take it?

CHRIS KLEIN: No. No. Uh-huh (NEG). it's been Streetfighter since last year.

Street Fighter The Legend of Chun-Li

The forces of darkness are led by Bison (Neal McDonough), a crime boss of seemingly limitless power, and whose past holds a shocking secret. Bison's syndicate, Shadaloo, is taking over the slums of the Thai capital, a task overseen by Balrog (Michael Clarke Duncan), a massively built enforcer and killer. Also in Bison's employ is the assassin Vega (Taboo, of the group The Black Eyed Peas), a masked talon-wielding warrior, whose weapon is tailor-made for slashing and stabbing attacks. Bison's attache is the beautiful but deadly Cantana (Josie Ho).

The games' action and imaginatively staged fight scenes are a natural fit for a big screen translation, a fact embraced by noted producer and Hyde Park Entertainment chairman Ashok Amritraj -- but only after his children, then aged 13 and 10, brought Street Fighter to his attention. "They really loved the game and told me I should make a movie based on it," says Amritraj. "I have them to thank for Street Fighter: The Legend of Chun-Li."