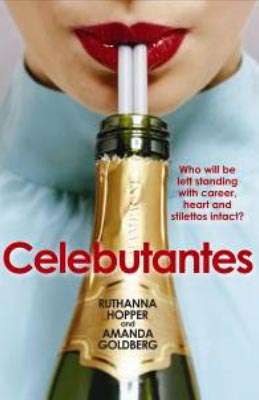 This is THE celeb-studded, gossip-filled, name-dropping, bling-toting wickedly funny read of 2008, a glorious Hollywood romp written by two girls in the know....

What would you do if you were born on Oscar night into Hollywood royalty? If you went to Vanity Fair parties rather than birthday parties? And if your life felt like a glamorous movie - but you weren't even the leading lady, merely playing the boyfriendless, jobless no-name extra number 310?

Twenty-something Lola Santisi is a platinum card-holding member of Hollywood Royalty, whose pop badly needs a Best Director Oscar win to revive his flagging career and whose mom's a fixture at The Ivy. Lola suffers from Actorholism (a fatal addiction to dating hunky actors) and CDD (Career Deficit Disorder, an epidemic among 'Adult Children Ofs' in Hollywood). Her latest gig as a Hollywood Ambassador means she's been engaging in L.A.'s cruellest blood sport: trying to persuade celebrities to wear her designer BFG's (Best Gay Friend's) gown to the Oscars.

Lola's other best friend Kate is an ambitious Hollywood talent agent desperate to move from the B-list to the "Über-list." Together with their friend Cricket (an actress best known for her role as "lead coma victim"), they navigate the real action leading up to the Oscars - the swag parties, the social manoeuvering, the aura cleansing, the private soirées - and the hottest of all exclusive after-Oscars invites: the Vanity Fair party.

Amanda and Ruthanna are scions of Hollywood Royalty. Amanda's father, Leonard Goldberg, is the producer of legendary TV hits Charlie's Angels and Starsky & Hutch. Amanda began her career working for famed fashion designer Todd Oldham and is currently producing the new movie version of Wonder Woman. Ruthanna is the daughter of the inimitable Dennis Hopper. She produced the ultra-hip CineVegas Film Festival in Las Vegas and recently produced and co-starred with her father in the indie film Americano.