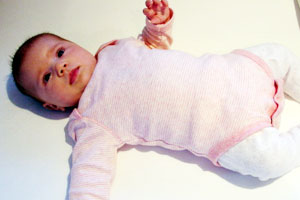 WOMEN who have their first baby by caesarean section run almost twice the risk of a subsequent pregnancy resulting in stillbirth, research suggests.

A caesarean section is known to increase the danger of disorders with the placenta in later pregnancies, but UK researchers say the link with increased stillbirth can't be explained.

Up to 30 per cent of births in major public hospitals in Sydney are now carried out by C-section, and nearer to 40 per cent in some private hospitals.

The World Health Organisation recommends the rate should be 10 to 15 per cent.
While the risk of stillbirth is still quite low - about one in 1100 births - the Cambridge University researchers don't know why.

They studied data on 120,000 births in Scotland between 1992 and 1998. The proportion of stillbirths was 2.4 per 10,000 women in those who had previously given birth by caesarean section. Most lost their babies at about 34 weeks during their second pregnancy.

The risk of stillbirth was the same, regardless of the reasons for opting for a caesarean section in the first pregnancy.

In women who had undergone a vaginal delivery the first time, the rate of stillbirth was 1.4 per 10,000, according to the research published in The Lancet. Lead researcher Professor Gordon Smith said: "Our results are of relevance for women considering caesarean delivery who are planning future pregnancies."

He said the risk of a baby dying due to a vaginal breech delivery at full term was 8.3 per 1000 births and could be significantly reduced by having a caesarean.

He added: "The overall excess risk of stillbirth in a second pregnancy that was associated with a previous caesarean delivery was below one per 1000, which is unlikely to influence the decision to have a caesarean section for breech presentation in the first pregnancy."

But it should be considered by women who are thinking about having a caesar for non-obstetric reasons, Mr Smith added.

Professor Judith Lumley, of the Centre for the Study of Mother's and Children's Health in Victoria, believes the so-called "too posh to push" phenomenon of women opting for caesareans for convenience was not a major issue among Australian women.

John Hunter Hospital director of maternal foetal medicine Dr Stephen O'Callaghan said the findings were just one of the factors to be considered by both obstetricians and their patients.

"Anything that increases risk [in future pregnancies] is a potential cause for concern, but in every procedure there is a discussion with the patient about the balance of doing something or not doing it," he said.

"This may suggest that doing elective caesars may carry this future risk for subsequent pregnancies, but it's a relatively small absolute risk and that's another thing that has to be balanced against whatever the proposed reasons are for doing the caesar in the first place."

Dr O'Callaghan said the research might shed some light on the incidences of unexplained late stillbirths.

"About one in 500 pregnancies approaching term suffer unexpected or unexplained late stillbirths and presumably some of those may be presented by doing the elective caesarean section, so it's just one other piece to weigh up in that balance," he said.

The latest research follows a large British study conducted last year, which concluded that those women who underwent C-sections took longer on average to fall pregnant again than women who delivered vaginally.

After analysing data from more than 14,500 women, Dr Deirdre Murphy from the University of Bristol found that about one in eight women who have a caesarean take more than a year to fall pregnant again, compared with one in 12 of those who do not undergo the procedure when first giving birth.

Factors that might reduce fertility, including the ages of both parents, smoking, drinking and ethnic background.

"For women who have had a normal delivery, the chances of taking more than a year to get pregnant is about 7 per cent and for those who've had a caesarean it is about 12 per cent," Dr Murphy said.