Bryan Brown has been an entrenched part of Australian cinema since its resurgence in the late 70s. From small roles in the likes of the classic Newsfront, the rugged Aussie won acclaim for starring roles in Breaker Morant, Stir, Winter of our Dreams, Far East, TV's A Town Like Alicve and The Thorn Birds, where he met wife Rachel Ward. In Hollywood, he found success in the likes of Cocktail, F/X and Gorillas in the Mist, but always called Australia home, going out of his way to produce films in the local industry and appear in low-budget films such as Cactus. Brown also co-starred with Sam Neill in the wrty British comedy Dean Spanley, which premiered at this year's Toronto Film Festival, is producer/star of wife Rachel Ward's feature directorial debut, Beautiful; Kate and co-stars in the multi million dollar Baz Luhrmann epic, Australia, as cattle baron King Carney. Paul Fischer caught up with Bryan Brown in Toronto, where he talked about the industry, acting and of course, working on the biggest Australian film to date.

QUESTION: So you're in Toronto with Dean Spanley. What was the attraction?

BRYAN BROWN: Well, it was offered to me. Read it, liked it. Found that the character - for me, it was - I had the opportunity of bringing a character that was like the new world into the old world. And someone who lived for life, while other people sort of got a bit stitched up. I liked what the story was about. Father-son stuff. And there was a whimsy to it that I thought was really original.


QUESTION: Did you find it hard to find original characters to play, the older you get?

BRYAN BROWN: No, I actually find the older I get, the more interesting the characters are.

BRYAN BROWN: Yeah. Yeah, I do. But maybe all the younger characters that they write are pretty much the same. They're all sort of - got to have a certain edge. Older characters have got - they've been through things, and there's a complexity to the characters. Everything's a bit grayer than it was black and white. 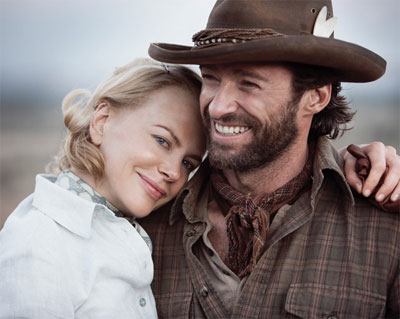 QUESTION: Even in the Australian film industry?

BRYAN BROWN: Yeah. Well, I mean, I've just finished doing Baz's - look. The truth is, in the Australian film industry, most things you get to play are character-driven stories. Let's get it right. The big Hollywood blockbusters, they're one-dimensional characters. You know. Let's get it right. So, yeah. I mean, even if a movie doesn't work in the Australian film industry, you've actually got, usually, some interesting characters to play. They might not be pulled off properly, but you've got them to play. But like - you know, I've just finished Baz Luhrmann's movie. Interesting character to play there.


QUESTION: Talk about your character in that.

BRYAN BROWN: I play, basically, a Kerry Packer-type character who owns half of Australia, and wants the other half.

BRYAN BROWN: Right. [LAUGHTER] Hey, I play a rather big - big character. A fair bit of my stuff's with Nicole


QUESTION: When you work with her now, given that you've been around the industry as long - longer than she has - are you surprised that Australia's created a little bit of a star system?

BRYAN BROWN: No, because - you know, that sort of trappings stuff isn't in part of the acting game. That's part of the gossip game, or the whatever game. That's - you get down to it, they go, "Action." You're making something believable or not. That's all that really, it's about there.


QUESTION: How would you define Baz as a director?


QUESTION: Always has been.

BRYAN BROWN: Very respectful to the person he's working with. And - you know - and he sought out what he wants to do. He knows what he's looking for, but with room to move within there. An intelligent director.


QUESTION: What about your directorial ambitions?


QUESTION: You don't want to do that?

BRYAN BROWN: I wouldn't direct if my life depended on it. I'm not interested in directing. Don't have the patience for it, nor do I have the obsessional quality that's needed. Nor do I want to give up six months of my life to one thing.


QUESTION: What about producing?


QUESTION: You produced that short that Rachel directed.

BRYAN BROWN: That's right. That's right, yeah. Produced. And I quite- I enjoy quite putting elements together, and stuff like that. But no, not interested in directing. Not interested at all.


QUESTION: What is the Australian film industry like at the moment?

BRYAN BROWN: Well, pretty much as it's always been. Makes about 20, 25 movies a year. You have good years and bad years. It's one of the few independent film cultures in the world that - you know, continues to produce works that go internationally and people'll do.


QUESTION: How surprised are you about your career, that it has run the gamut, and that you're still able to find roles that are of interest to you, that many years later?

BRYAN BROWN: Well, I gotta say - I was thinking about that the other day. And I was thinking, "Geez, I'm really glad I'm still working, and working quite solidly." You know, like - it's sort of, I go - and I actually asked myself the question the other day, would I have thought when I started that I'd still be doing it now, and - you know, it looks like will continue to do it for another ten years? Would I have thought that?" And probably - I wouldn't have, because you take everything for granted when you're young. But I don't know. I don't know what my answer would be. But I sort of did, the other day, humbly go, "I'm really pleased that I have been able to continue working, and working quite substantially, and travel the world. I'm a pretty lucky boy."


QUESTION: And how gratifying is it for you to have been a part of the evolution and genesis of the Australian film industry, during the '70s?

BRYAN BROWN: Yeah. There's an historical perspective on that that's, I suppose, pretty nice to be allowed to have. I sit within a certain historical part of the industry. That's pretty nice, how those things happen. You don't know. You just - you don't know, but it also gives me a perspective on, it wasn't there once. And don't take things for granted. And that, don't take an industry for granted. You've always got to fight for it to be there, because bigger business interests will always be glad to get rid of it.


QUESTION: How have you been able to keep your ego in check for so many years?


QUESTION: But you have a very Australian attitude towards life.


QUESTION: How have you been able to juggle your professional life with your family life?

BRYAN BROWN: Because I place my family life first.


QUESTION: And how is all that going?

BRYAN BROWN: I just got the most beautiful Father's Day e-mail from one of my daughters.


QUESTION: I can never imagine you as being a father. I don't know why that is. I always saw you as being single.

BRYAN BROWN: I probably couldn't, either. But, you know, I grew up - I was brought up by a woman on her own, brought up my sister and I. I think I had a great respect for family and all that that I didn't know about until I had to do it.


QUESTION: Has Australia changed a lot, in your mind?

BRYAN BROWN: Yeah. Yeah, I think it has changed a lot. Just as every place changes a lot, you know? It's changed in many respects for the better. It's a more cosmopolitan face. We have influences from everywhere, particularly Asia. Our European influence was fantastic, in making the country what it was. The Asian influence is gonna take it to another dimension. It's always changing. I think that's good. It doesn't change, it - look at Italy. It has no - hardly any immigration. It's a very - being an artist in Italy is terribly hard. You've just got all these people from the 16th century as artists that they talk about. Very hard to find a place. And we're allowed to find our place. We're allowed to rise from nowhere to be something. It allows that. We're very lucky. We're isolated. There's strengths in that, but there's weaknesses in that, too. There's things that you miss out on. I don't, because I'm lucky enough to travel, and be able to taste of everything that's going on. But as a nation, there's a certain - things that it misses out on. But there's also things you gain from that isolation. You know, it's not as neurotic a nation as some others are. You know? But then maybe it could do better in other areas, because it doesn't have the competition next door to it. But - the downside is, it's got more materialistic. The gap between t rich and the poor has got wider. Those things aren't good.


QUESTION: Would that change under the new government?

BRYAN BROWN: No. It's the way - it'll be a catastrophe to change things like that. Or revolutions, and they could be three or 400 years down the track.


QUESTION: Would you ever consider writing your memoirs? Have you been offered?

BRYAN BROWN: No. Never - I wouldn't, because I'm thoroughly uninterested in it.

BRYAN BROWN: I don't see that it has a place.


QUESTION: What are you planning on doing next, do you know?


QUESTION: Are you a father?

BRYAN BROWN: I play a father who's dying, to Ben Mendelsohn, who's my son who's come back to visit me. And there's this story that happened 20 years ago that goes in parallel to it. Written and directed by my wife. Her first feature. It's immensely powerful and beautiful.


QUESTION: When will it be released?

BRYAN BROWN: It won't be until the middle of next year. Roadshow is putting it out. The Work's English Charles Company got the international sales for it. And, you know, we'll hope to present it at one of the major festivals if we get it right.


QUESTION: What was it like working with Rachel on a feature?

BRYAN BROWN: The shooting was really good. She was fantastic in the shooting. In that she was the nicest to me she's ever been. [LAUGHTER] And I'm not sure if that's because she suddenly realized the power of an actor, I can walk off and go, "I'm not doing this bloody shit." And so I had power, that she recognized. But in developing the script, it was war.

BRYAN BROWN: Because, you know, she'd present something to me, and I'd go, "It's not there yet." Or, "That's not right." And then - argh! They don't like hearing that, writers. They want you to say, "Wonderful. Let's make it tomorrow." So, that was difficult. But the editing process has been pretty good. Just a couple of snarls at me when I said something about a couple of cuts. But otherwise, no. She's been very open to that, too. So it's been - from the making of it, it's been a pretty good experience.


QUESTION: You are very opposite people -- I mean, I remember talking to her about you at Sundance. And I can't remember how - what she referred to you as. Some - larakin I think was somewhere in the qualification. Yet you seem to have this marriage made in heaven. I mean, why do you think that is?

BRYAN BROWN: Well, we both work at it, because, let me tell you, there's two very strong-minded people in there. So there are some spits and blows. But, you know, there are reasons to work at it. Listen, there's nothing that doesn't pay off if you work at it. Nothing.

BRYAN BROWN: Yeah. There's a real truth to that. Don't think I don't know that. In lots of things. Yeah.