Bon Jovi When We Were Beautiful 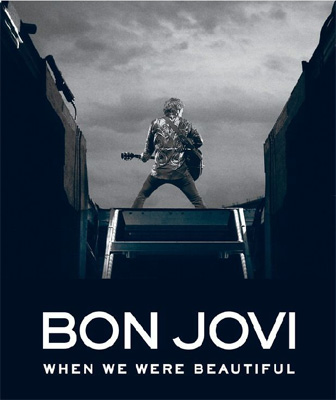 Bon Jovi When We Were Beautiful

The story of Bon Jovi's career- spanning three decades, countless hits, sold-out stadiums - reads like a timeline of popular culture and has earned them legendary status. But for all their acclaim, fans have been offered very few up-close-and-personal glimpses of the band members.

To commemorate their 25th anniversary, the band gave filmmaker and photographer Phil Griffin unprecedented access to their lives, onstage and off, during 2008. The Lost Highway tour became the #1 tour in the world last year, according to Billboard magazine.

This insider portrait of one of the world's best-loved rock bands is the subject of a Showtime documentary film and this extraordinary book, Bon Jovi: When We Were Beautiful is a must-have for all Bon Jovi fans.

Bon Jovi: When We Were Beautiful offers unprecedented insights into the members' lives on stage, on the road, and at home, as well as intimate reflections on the highs and lows of their 25 years together.

Bon Jovi is responsible for some of popular music's biggest anthems over the last 25 years. Namesake Jon Bon Jovi is lead singer with Richie Sambora on guitar, David Bryan on keyboard, and Tico Torres on the drums.

Since Bon Jovi's eponymous album release in 1984, their songs have propelled their albums and tours to stratospheric success with precision consistency. From rock songs (You Give Love a Bad Name, Living On A Prayer, It's My Life, Who Says You Can't Go Home,) to ballads (Bed of Roses, I'll Be There For Your, Always,) to outlaw-themed anthems (Wanted Dead or Alive, Blaze of Glory), their arsenal of All-American songs have repeatedly found a reception on a global stage. Bon Jovi has sold over 120 million records worldwide and charted seven #1 singles and countless Top Ten hits.

The public face of Bon Jovi- band of brothers, hitmakers, rock stars- is well known but in Bon Jovi: When We Were Beautiful, gorgeous, exclusive photographs and revealing text from Jon, Richie, David and Tico themselves tell the behind the scenes story. From intimate moment to basking in the limelight, the book offers fans an honest, unposed and unscripted portrait of his legendary band at work and at home.

Bon Jovi has set the standard for more than two decades as one of the most successful rock bands in the world. Globally, the Grammy Award-winning band has sold more than 120 million albums and performed more than 2,600 concerts in over 50 countries for more than 34 million fans.

Phil Griffin is a director and a photographer who has collaborated with such stars as Amy Winehouse, Prince, Annie Lennox, Kings of Leon and Sir Paul McCartney. In 2008 Phil embarked upon a new chapter in his creative career making his debut as a documentary filmmaker and writer. In addition to his extensive still photography work with Jon Bon Jovi in 2008, Phil toured the world with Bon Jovi directing the documentary feature When We Were Beautiful, which was premiered in New York as a special selection at the 2009 Tribeca Film Festival.