Billy Bob Thornton in "The Man who wasn't there"

Our LA correspondant, Paul Fischer chats to Billy Bob Thornton, star of "Man who wasn't There"

The acclaimed writer/director/actor and now husband to one Angelina Jolie is one busy dude.

From the commercial crime comedy "Bandits" (released in Australia early 2002), through to the Coen Brothers' startling film nourish thriller "The Man who wasn't There" and to the soon-to-be-released Monsters Ball, Billy Bob Thornton is everywhere, yet not one performance or character repeats itself. And that's just the way he likes it, he explains.

Billy Bob Thornton walks in minus the pretensions of movie stardom. Wearing his trademark jeans and baseball cap, no matter how many times one meets this Oscar-winning southerner, one realises how little he has changed since first garnering attention for Sling Blade. Following his customary strong handshake, Thornton settles down to heap praise on the idiosyncratic Coen brothers, Joel and Ethan, who cast Thornton as an isolated barber whose attempt at blackmail turns to disaster, in the 1940-set black and white drama The Man who Wasn't There. "They're great guys with a wonderful sense of humour that make every day fun." 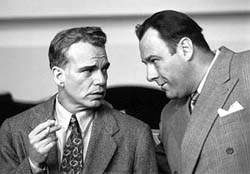 Unlike his comic performance in the more mainstream Bandits, Thornton is required to adhere to the less-is-more philosophy of acting, which required remarkable control, yet play the film's dominant character. It provided the actor with some unique challenges. "I had to be the focus of the entire movie, and yet this character was unable to relate to people. So the actual acting work here was done by always thinking", he explains. "Because when you're thinking about stuff, people can read that in your eyes and see it. I don't mean thinking about silly stuff like the day my daddy ran over my puppy when I was of 5, but thinking about the situation I was in at the time, thinking about ANYTHING that would keep me in a melancholy mood."

One would imagine, then, that it would be difficult to leave such a character behind.

Not so, Thornton responds. "I'm not one to brood and stalk in the hallway or yodel between scenes. I don't really carry it home, because you try to be there in the mood at the time, but you try not to take it too seriously, because that's pretentious actors' stuff."

There are no pretensions about Thornton, who insists that actors, who insist on being too self-involved with a part, stem "from a need to be taken seriously and be noticed by people." Not that Thornton doesn't prepare for a role. In this movie, he does, after all, play a barber, so he decided to learn how to be one. He recalls the experience in true Thornton style. "I went to this barber shop called Dirty Dan's Clip Joint, in some small town that I can never remember the name of. It's been there forever and what they had me do was just be one of the barbers there. So customers would just come in to get their hair cut and it was me cutting their hair. It was a really interesting barber shop. They had a refrigerator next to the bathroom with beer in it, and in the bathroom they've got Playboy magazines, so it's kind of a guy's barber shop. So the first guy whose hair I cut got the worst job, but fortunately most of the mistakes were in the back so he never noticed them."

Of course, Thornton adds, he did improve, as long as the hair was thick and curly. 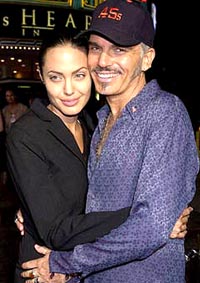 It seems an eternity ago that Thornton was acclaimed for his Sling Blade. Since then, the actor has given up drugs and even cigarettes. Clean as a whistle, he remains blissfully married to one Angelina Jolie, a relationship that has often been scorned in the press. But Thornton retains a sense of humour on the subject. "We laugh at it. The fact of the matter is that we're telling the truth. We really are crazy about each other. That's probably why people think we're different. Frankly, mostly it's just silly and we don't pay much attention to it but people like us together, so it's not like we're going to get upset about it. Journalists like yourself are always are pretty kind to us. You just say, 'Hey, here's the weird thing they did this week' but it's always about good stuff about us being together and being in love with each other, so who cares really? The fact of the matter is we're probably more boring than people would like to think. It would probably be disappointing if people knew exactly how not weird we are. We don't drink blood, we don't have a dungeon, I eat many more types of food than orange," he adds laughingly.

And there is the story about him wearing her underwear. Even though "it's not easy to wear her underwear. I kind of wore it more on one leg. That was just something I did a couple times, just a little funny thing and it was made into some big deal as usual, like everything is with us. That was really not that serious. She more often wears MY things. She wears my shirts and stuff, T-shirts, old ones that are really ratty so they're real soft; she wears those to sleep in."

All jokes aside, Thornton turns serious when asked about his own priorities. "What fulfills me is really, playing good characters in good movies no matter how well they do. I want them to do well, obviously, but if they don't, if I know it's been a good movie and a good experience, that's really what does it but I love it when my wife likes the stuff I do. And my mother. My kids can't really see most of the things I do. They're seven and eight, but I think Bandits they may be able to see. I can't think of anything too weird." 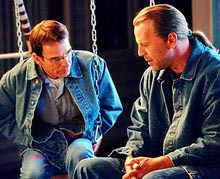 His kids won't be able to see Thornton's next movie, Monster's Ball, co-starring Aussie Heath Ledger and a possible Oscar contender. "It's a very, very heavy movie and I saw it the other day. It's a very good movie. It's one of those that when it was over, I was like, 'Wow, I was in that, huh?' That, the Coen Brothers' movie and Bandits are three things that I'm really proud of being in. They're all different and what I've got coming out between now and March, I feel so blessed I can't tell you."

Thornton is also blessed by his marriage, he concludes. "We were best friends from the time we met and she's the only person who I can just look at her and she knows exactly what I'm thinking. That's really difficult to find in this world and vice versa. The thing that I hope that people will say about her, I won't even get in to, but the thing I just hope people always realize about her, she's a really kind person. She's a good friend to have and that's the main thing. Forget any kind of vials of blood we wear around our necks. That's something that's very personal to us and if that were put in a movie, everybody would think it was romantic. When you do it in real life, they think you're a weirdo. We're actually a couple of regular people who actually love each other and are best friends."

And yes, the two hope to work together in the near future.