BILLY BOB HAS HIS EYE ON THE BALL - EAGLE EYE THAT IS.

He's one of thids country's most beloved character actors, a director and a self-described hillbilly musician. Usually one to stay away from big-budget Hollywood action fioms, Billy Bob Thornton turns in a nicely laconic performance as an FBI agent hunting down accused terrorist Shia LaBeouf in the DJ Caruso-directed action pic. The veteran actor spoke to Paul Fischer in this very exclusive interview.

QUESTION: You know, you're obviously a character actor, and you're drawn to a lot of very specific types of characters. I was wondering what the attraction was for you to do a kind of big Hollywood movie where it's more about plot than it is about character?

BILLY BOB THORNTON: Well, it was very different for me. You know? I don't normally, as you know, do that. But I guess the last time I did anything like that was probably Armageddon. I think it's interesting to play somebody that you aren't normally going to play. I mean, I've now played the head of the anti-terrorism task force for the FBI, so I can put that feather in my cap and it was interesting to play a character like tha,. because the trick for me was to play him as a regular guy and not to do the stern, typical FBI guy in movies. Just to play him as a guy who's scared to death of what's going on here, who doesn't know what's happening. Also it was a smartly-written script, because a lot of the action thrillers just set out to titillate an audience and that's it. But this one actually had a pretty strong plot, and everything and then working with DJ [Caruso] -he's a great guy. So it appealed to me at this time.


QUESTION: Why at this time?

BILLY BOB THORNTON: I don't know. I think it's mostly because I've been concentrating on music so much, and I've been touring and I put out a couple of records in the last year, and I've really been holed up in the studio and on the road, you know? And that movie kind of - it was a chance to go out and do something that I didn't have my soul invested in as much, maybe, because it was already invested in something else.


QUESTION: Did you get a thrill out of doing a lot of the physical stuff that you were required to do in this?

BILLY BOB THORNTON: Yes. Certainly while you're doing it. It's not thrilling the next morning, when you're 53 and you're trying to get out of bed. But, yeah, it was fun. 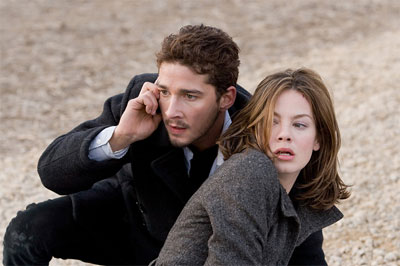 QUESTION: You mentioned your music. How has that been going, and how has that kind of changed you as an artist?

BILLY BOB THORNTON: Well, you know, I grew up in music, so I kind of became an actor later in life. And so music is where I've always been most comfortable. Although, you know, I had to overcome a lot, these past ten years. And this year, this new record, The Boxmasters, which is our mod-billy, we call it - which is really based on the British invasion mixed with hillbilly - this record has taken off with the Americana charts. And we got up to number 13 on the Americana chart, and number two on the independent record chart. And it's really taken off. There's a lot of - not only satisfaction as a musician and a songwriter now, but also the public is starting to know my records more, which has really been great.


QUESTION: Do you want to focus more on music, or are you trying to find the right balance?

BILLY BOB THORNTON: Well, I found the right balance a few years back in terms of the time I spend on it. But I would say that yes, right now my focus is mainly on music, more so than movies.


QUESTION: Are you surprised at the kind of success you've attained in both aspects of the arts, I guess?

BILLY BOB THORNTON: Oh, sure. I've always been shocked by it. You know, I grew up - I was a poor kid, you know? Grew up in the woods. I never thought I'd get outta there. [LAUGHTER] So anything that happens, Paul, I'm - I'm pretty happy. [LAUGHTER] I mean, when I get out of bed in the morning, and - you know, I'm able to make an omelet, I'm pretty happy.


QUESTION: You're a man of very simple tastes, I can see that.


QUESTION: Now, I understand that one of your next movies - I've never interviewed an actor before who's played a manure salesman.


QUESTION: Obviously this must have been an immense challenge to you as an artist.

BILLY BOB THORNTON: [LAUGHTER] Well, we all sell manure in one way or another. But, yeah, that was an interesting movie to do. I loved it. I absolutely loved that experience. I love working with the Polish Brothers. They were really good kids, really talented. And, you know, I worked with Tea Leoni and Kyle McLachlan, who I'd never worked with before, and that was a great experience. And it was just a real satisfying movie to make. What's great about it is, they made it like the old movies. It's a very low-budget movie. They didn't have a lot of money to make it with. But it's - the whole thing's shot on stage. And not green screen. But - there was a little bit of green screen work. But mostly it was just on the stage with painted backdrops, like the old movies. So the actual walls were painted. And so it's - it goes back to, like, the movies of the '30s and '40s, you know? It's really terrific. And it's a dark comedy. 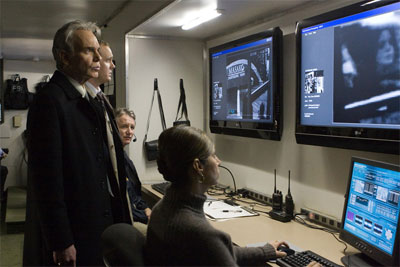 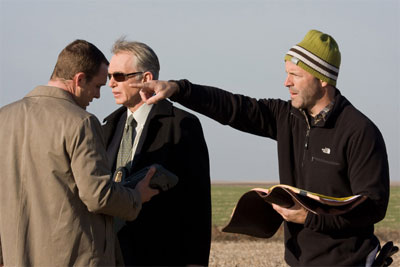 QUESTION: You're attracted to those kinds of movies, ostensibly, though, aren't you?

BILLY BOB THORNTON: Oh, absolutely. Yeah. Dark comedies have always been one of my favorite genres to work in.


QUESTION: What - you know, you have a lot of other stuff coming out, too. So you're obviously very busy.

BILLY BOB THORNTON: Not as much as people think. A lot of stuff gets on the Internet that I'm not doing. I've only got Manure coming out, I guess next spring some time. And then I did a cameo in a movie called The Informers. But I just did a cameo. I worked on it about a week or two. And that comes out, I think, maybe some time in October, November. But I'm a pretty small part of that movie. But those are the only two things I have coming out.


QUESTION: Have you signed on for anything else?

BILLY BOB THORNTON: Not yet. I've got a bunch of offers, and I'm just trying to figure out when I'm going to do `em, and which ones I want to do. There's a couple things I want to direct, too. You know, I haven't directed since All the Pretty Horses. And I've got a couple up my sleeve that I might try to do over the next two years. So I just have to find - well, first of all, I have to find the financing. You know, it's not as easy to get a movie financed any more.