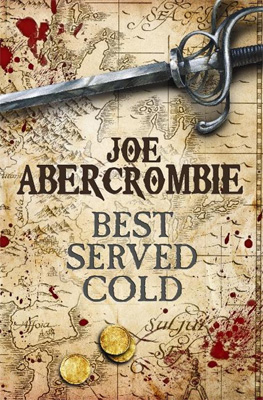 Springtime in Styria. And that means war. There have been nineteen years of blood. The ruthless Grand Duke Orso is locked in a vicious struggle with the squabbling League of Eight, and between them they have bled the land white. While armies march, heads roll and cities burn. Behind the scenes, bankers, priests and older, darker powers play a deadly game to choose who will be king.

War may be hell but for Monza Murcatto, the Snake of Talins, the most feared and famous mercenary in Duke Orso's employ, it's a damn good way of making money too. Her victories have made her popular - a shade too popular for her employer's taste. Betrayed, thrown down a mountain and left for dead, Murcatto's reward is a broken body and a burning hunger for vengeance. Whatever the cost, seven men must die. Her allies include Styria's least reliable drunkard, Styria's most treacherous poisoner, a mass-murderer obsessed with numbers and a Northman who just wants to do the right thing. Her enemies number the better half of the nation. And that's all before the most dangerous man in the world is dispatched to hunt her down and finish the job Duke Orso started... Springtime in Styria. And that means revenge.

Joe Abercrombie is a freelance film editor living in London. Also by the author: The Blade Itself, Before They Are Hanged and Last Argument of Kings.

"Joe Abercrombie's Best Served Cold is a bloody and relentless epic of vengeance and obsession in the grand tradition, a kind of splatterpunk sword 'n sorcery Count of Monte Cristo, Dumas by way of Moorcock. His cast features tyrants and torturers, a pair of poisoners, a serial killer, a treacherous drunk, a red-handed warrior and a blood-soaked mercenary captain. And those are the good guys. Monza Murcatto, the Snake of Talins, could teach even Gully Foyle and Kirth Gerson a few things about revenge. The battles are vivid and visceral, the action brutal, the pace headlong, and Abercrombie piles the betrayals, reversals, and plot twists one atop another to keep us guessing how it will all come out. This is his best book yet. All that's missing is a map." - George R. R. Martin's

"There's enough wit, pace and élan in Best Served Cold to entertain the most rabid anti-fantasist, let alone a lapsed believer like me. This is the crackling, bitter, bloody antidote to anodyne sagas. Spiked with cynicism, and indeed spikes, Best Served Cold has as much in common with a classic Hollywood caper as it does with the rest of the genre. Moral ambiguity, hard violence, and that weaving of laughter, horror and pathos make it breathe, though the brilliant characters are what really make this soar. This is the highest grade of adult, commercial fantasy we have seen for quite a while."-Deathray (US)