Beneath the Bloodwood Tree 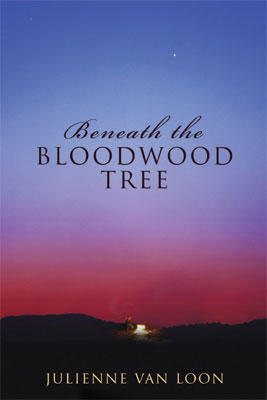 A tightly-woven tale of ghosts, death, love, and dislocation, Beneath the Bloodwood Tree is the unsettling and powerful new novel by The Australian/Vogel Award winner, Julienne van Loon.

Now she listens, perhaps unwisely, to a prickling beneath her skin. It's a sensation she hasn't felt since she was a child. There's some kind of presence in the air, something intangible.

Pia Ricci has come to Port Hedland to free her life of complications and distractions. But when Pia discovers a bundle of money and men's clothing buried on the outskirts of town, she has an uncomfortable feeling that things are about o change. Is it connected to the foreigner Joachim, a new arrival in town? Or to the ghosts in her own past? As Pia and Joachim grow closer, Pia can see he has secrets. The widow Barnes, one of Joachim's nursing charges, also holds secrets, and they're coming to the surface.

As these three misfits come together, their world starts to change in ways that they could never have expected. Set against the vast inhospitable landscape of the Pilbara, this is a powerful, tightly-woven desert tale of ghosts, grief and love.

In Beneath the Bloodwood Tree, Vogel winner Julienne van Loon brings to life three very different characters and succeeds in allowing us to see the world through their eyes. Her interest in setting a book in Pilbara region of Western Australia stemmed from the experience of living and working in Port Hedland in 1995-96. The experience of the remote, rugged Pilbara landscape and the extraordinary people who inhabit it stayed with her and ultimately formed the starting point for Beneath the Bloodwood Tree.

About Julienne van Loon
Julienne van Loon was born in 1970 and grew up in country New South Wales. She studied creative writing at the University of Wollongong and later at the University of Queensland. Her first novel, Road Story, won The AustralianVogel Literary Award in 2004 and was published by Allen & Unwin in 2005. Julienne's work has been published in a variety of journals in Australia including TEXT, Mattoid and Verandah and has been broadcast on ABC radio. She now lives in Perth, where she is a lecturer in the Faculty of Media, Society and Culture at Curtin University of Technology.