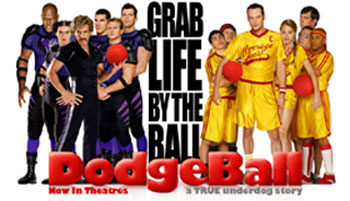 Stiller Dodges a Ball and Comes Up Smiling.

It would be an understatement to say that this is quite the busy year forBen Stiller. So far, we've talked to him about Along Came Polly and Starskyand Hutch, and later in the year are Envy and Meet the Fockers. But ifStiller feels overexposed in any way, he is not prepared to admit it. "Wewant to get Fockers in by the end of this year so that I can have fivemovies come out this year, so we're hoping," laughs Stiller. He does seemsomewhat concerned that by year's end the public may have grown tired ofseeing a Ben Stiller film. "That would be horrible, yes, Jesus. Why didn't Ithink of that? Unfortunately, I can't control when they release the movies.I've done these movies over the last couple of years and you just do whatyou find funny. Hopefully, people will come if they want to come. But I havean awareness of not wanting to do too much, but I have to just go with mygut of what I think is worth doing."

One such film that he found funny was Dodgeball: A True Underdog Story, by afirst-time writer/director, in which Stiller shines as an over-obsessivefitness guru who owns a major gym, determined to take over a strugglingcompetitor, owned by Vince Vaughan. Easily the most comically unsympatheticcharacter in Stiller's recent arsenal, the actor laughs when asked if thereare any parallels between actor and character. "I mean, look, they're allelements of yourself somewhere." He differentiates his White Goodmancharacter from its recent predecessors, he says laughingly, "by startingwith the moustache and then going to the wig and skin colour. He had thiskind of tone of orange that doesn't really exist in nature, that fake sortof skin, that tan machine, tan lotion thing. It's just trying to somehowconnect with some sort of ridiculous, self-made kind of fitness guru thingthat I think exists out there." Stiller says that the character isn't basedon any one particular person. "There are people and elements over the years,from which I borrowed, including characters on The Ben Stiller Show sketchshow, where we did a Tony Robbins take off, or that fitness guy Tony Little.I just tried to come up with something that feels like what the characteris, based on what [writer/director] Rawson wrote."

For those unfamiliar with this distinctively American childhood game,Dodgeball involves throwing balls at your opponents and essentially hittingyou. It is an aggressive, fast and wild sport, one which Stiller DID play asa kid, and, as exemplified in the movie, was one of the more aggressiveparticipants in the sport. "I had a lot of anger and rage, but I was notvery physically daunting, so I think that worked for me. But I was anawkward sort of adolescent and not as coordinated as I wanted to be. I wasnot the worst but I definitely wasn't the best, so I was probably closer tothe backend of the middle."

It was Stiller's sense of awkwardness that may have led him, on asubconscious level, to the world of comedy. "I think comedy comes, on somelevel, from having a sense of humour about life and seeing life in a waywhere you have to have some sort of perspective on it. People that don'thave any sort of insecurities, I think, tend to be less funny. I thinkhumour somewhat comes from the fact that you can see how ridiculouseverything is and how we're all sort of just trying. I know I find thosepeople funnier to me, those who can see the ridiculousness in life.Confident people seem to be less funny and seem to have less irony aboutthem."

It was fortunate that Stiller not only came from a family steeped in comictradition, but also married a beautiful and sparkling comedienne inChristine Taylor who also happens to play his nemesis in Dodgeball. Stillerlaughingly admits that she wasn't as repulsed by his character as he thoughtshe may have been. "She wasn't really repulsed by it, at least that's whatshe told me, almost turned on in a way," confesses Stiller. "It wasinteresting because we got to sort of have fun on this film and somehow shethought it was funny, like this character. We were laughing a lot, and gotto spend time together, which was good. When you're working, you don't getto do that and we just connect on that level, where we laugh at the samethings, which was really fun and therapeutic. It's always good to throwballs at each other and good couples therapy," Stiller smilingly adds. Butif you are throwing balls at the wife, hitting her in the process is notexactly a good idea. "I hit her in the face a couple times, which wasneither good nor helpful. That actually affected our relationship for like aweek, because there's just no way not to get upset with somebody afteryou've done that. It just sent us both back to eighth grade."

The couple has a two-year daughter who occasionally accompanies her parentsto work, but Dodgeball was not the easiest set for a then one and a halfyear old. "She came a number of times, but when we were doing this movie, itwas definitely not the best place for her to be, so she'd look at dad in hisweird wig."

Stiller is still at work on Meet the Fockers, in which Oscar-winning legendsBarbra Streisand and Dustin Hoffman play his parents to DeNiro's somewhatscary in-law. He says he is having a blast working on this film, with thatparticular cast. "It's one of those things where you go to work everyday andgo: 'This is just unreal.' Yet, you get to a point, and luckily kind ofquickly, where everybody feels comfortable with each other, which you haveto have to make it work. But, I'm sitting there doing scenes with BarbraStreisand going: 'I'm doing scenes with Barbra Streisand who hasn't been ina movie in eight years.' She's so funny yet so iconic and it's exciting."Streisand gets to play the quintessential Jewish mother in the film, butwith a twist. "She's like the Earthy, cool, sex therapist for seniors, whichis what she does in the movie. So she lets it all hang out and just looksgreat. She's got this dark, curly wig, reminding me of a lot of moms fromthe upper west side in the 70's that I grew up with."

After having seen a lot of Stiller this year, the actor hopes to finallytake a breather. "I am going to take a break for a while, let everyone chillout for a little bit, myself included." Then he hopes to diversify and maybereturn to drama. "I hope so, if people allow me to. Well actually and thenkind of figure out what I'm doing. But I mean, my hope is to always be ableto do different things."