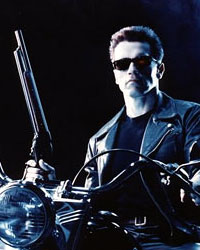 Schwarzenegger for Governor? Maybe, but he still ain't saying.

Arnold Schwarzenegger was looking more tired than usual while promoting his eagerly anticipated Terminator 3. One topic he was not interested in discussing, was his possible political ascension as Governor of California, amidst the controversy surrounding current Governor Gray Davis whose unpopularity here is so low, that attempts are being made to recall him. Who else but the Austrian Terminator himself as Davis' successor? But the man himself isn't giving anything away. "I think that some of it is media speculation and I myself don't think about that at this point, because there is no recall. There's no reality yet there. I will think about that after I'm through with the promotion of T3 and what happens with the recall and what happens in the future and if there's a need for it. So, I would say that my mind is not there at this occasion," he says, referring to the press junket for the new Terminator movie. But when pressed if the actor would put his name in the ring, should a recall ballot be passed, the actor does what any good politician does: Avoid the question. "I would say that this is a discussion and something to think about after I'm through with the promotion of this movie. Right now, I only think about one thing, and this is Terminator. Then I still have to go around the world to the middle of July to promote the movie and t after that, I can't think about it. By that time, July 18th, the cut-off date for the first ballot thing, it would've happened and then I can think about it." Yet Schwarzenegger says he not surprised about the media's obsession with this question, "because I think that it's natural when you have a state that is in an emergency and when I've expressed my interest in the past, of course they put the two together and they speculate and talk about it. It's totally understandable."

Enough said, but he'll be back. Talking about which, Arnold IS back, not as political aspirant but Hollywood superstar and icon. It's all there: The black leather coat, sunglasses, and in T3, he acquires his classic look from a male stripper. All of this begs the question: Is there a homo-erotic subtext underpinning this al-new Terminator? Schwarzenegger doesn't quite see it that way. "I think those are all scenes that really add a lot of fun to the movie and that's the way I see it. I think that the Terminator has been established with leather, it's the most memorable kind of outfit I would say that was created for any character in the history of motion pictures. They even tested audiences and asked them if they remember what outfits John Wayne or Clint Eastwood wore in a certain movie. A lot of people remembered those things but everyone remembered what The Terminator wears, so it's just one of those things and I think it's a great style. Again, in the second Terminator we established already where it is that he gets his outfit. It's in the bar, so this time it's a bar but it makes it funnier when it's a strip joint." Yet co-star Clair Danes says that the muscular Austrian was a gay icon but Schwarzenegger wasn't prepared to go there. "I think that the gay population is part of our society and that because the Terminator character is an icon character for people that are gay or not gay, it has nothing to do with their sexual preference. I think he's just an icon, period. I mean, kids don't even think about that yet and they're eight, nine years old and idolize the Terminator. Women love the character. As a matter of fact, Warner Brothers called me yesterday and said how shocked they were when they got the tracking of how many women are interested in this movie. It's an interesting phenomenon that they love this character and I think it has a lot to do with that people are frustrated with their lives a lot of times, or they feel powerless and other things. They like to go and see a movie where someone takes charge and you have the control. Maybe for a few seconds, you can be the terminator and take care of the jobs that you normally couldn't do." We went to him with a script and asked him to do it. It was his choice. What I was saying is that I would never allow anyone that buys the rights to Terminator to go and say okay, Arnold, are you in or not? But we're going to do it without Jim Cameron. We're not even going to go to him. I would not have done that. But, we gave him the choice. I myself brought the script to him and he just couldn't figure out time-wise, didn't want to do the movie under those constraints, that it was a summer movie that had to start shooting at a certain time." For Schwarzenegger, it is clear why this character has stood the test of time. "I think only because of the fans who are interested in the character and in the movie. I think the fans just want to see a new one."

In T3, Arnold has to do some serious fighting with a sexy, but powerful, female terminator, which the actor said "was interesting and I thought very appealing because art imitates real life. I think that in real life, we see that happening more and more that women become very strong." Perhaps his own wife, Maria Shriver, kicks his own butt at home. "Absolutely, that's why I was so well trained for this character," says Schwarzenegger, laughingly. "There's something really great about it because women for so long have been portrayed as weak and left behind, so this is really good. Even though it's machine against machine in reality, the exterior is at least like a female.What made it challenging was to do the fight scenes, because how hard do you want to punch a woman? How hard do you want to grab her and throw her against the wall? In this particular case, I had to basically start timidly about it because even though we were rehearsing all this, you do everything a little less. Then when you do the scene, I was doing it in a kind of half way than I would do to a guy, she would then say, 'You can grab me harder. You can throw me harder.' Then she would push me all the time and build me up to a 10 where I did the movie like how I would do it with a guy. I was amazed at how much punishment she could take and how much she was willing tobe bruised and get banged up."

At 54, Schwarzenegger is not as young as he was, but also says that "I don't embrace getting older or even think much about it." Retirement from the screen is far from his mind. The actor and his fellow T3 cast mates are signed for a Terminator 4, but first, he'll shoot the remake of Westworld. Omne wonders if he ever did become Governor, if the actor would give up the acting entirely, as Regan had done 30 years earlier. "I would try to do movies at night and run the state during the day," he says, laughingly. If anybody could do both, the Terminator could.