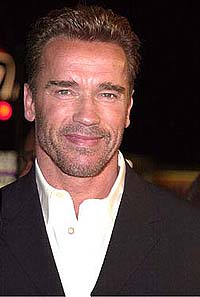 There is nobody in Hollywood quite like Arnold Schwarzenegger. More an icon than merely a movie star, Schwarzenegger is a unique phenomenon and a rare survivor. The ex-Mr. Universe from Austria is that rare superstar whose films are as huge internationally - even more so - than domestically. And while his previous two films were not huge in the US, he is still being paid an estimated $US30 million for Terminator 3. Is there a place for Arnie in post-September 11? Time will tell, as his latest film, in which he plays a fireman hell bent on avenging the deaths of his wife and son, opens in the US next month. Paul Fischer met a jovial and talkative Arnold in Los Angeles.

At 54, Arnold Schwarzenegger still looks taut and youthful. Even despite heart surgery and, more recently, a recent motor bike accident. "I broke 6 ribs. My wife took me to the hospital right away because I knew that there was something feeling really uncomfortable when I inhaled. One of the ribs was kind of sticking into my lung. So I knew right then that I should go to the hospital. So they took X-rays. At first they thought it was four ribs, then a day later when my lugs filled up with blood, they did a MRI and they realized it was 6 ribs. And so it was obviously a very painful experience. You can't cough. You can't sneeze. You can't do anything. You just lie in a hospital bed and the only way you get out of it is by controlling the bed [with a remote] and then you can slowly get up. All those things that I hate such as having to be taken care of."

But it's his marriage to TV broadcaster and Kennedy relative Maria Shriver that remains the constant force in Arnie's life. The marriage has endured media scrutiny and the highs and lows of Schwarzenegger's career. They've been married for some 16 years and have four children, and so Schwarzenegger admits that being emotional on screen in his new film "Collateral Damage", came easier to him than in the formative part of his career. Referring to a pivotal moment in the film when he witnesses the deaths of his wife and son. "I think that I do it easier today than I could have done 20 years ago because I can relate to family much more and I'm more in touch with my emotions than 20 years ago. Also I am older. I think it was just THAT KIND of a scene is so powerful, when you sit there, feet away from where your family is lying - who you have seen minutes before alive and waving, smiling, full of joy and then to see them blow up. It's this extraordinary kind of thing. It's this kind of thing where you see from this Sept. 11 tragedy where you hear people say their loved one has just called them moments before the tragedy occurs. I'd have to say, I don't know if I had been 30 years old if I could have related as much."

September 11 was a turning point in the American psyche. Hollywood insisted it would be more responsible. "Collateral Damage" - initially due out last September - was put on hold, yet Arnold insists that the time is ripe for films such as his, to gain audience acceptance. "You never know 100% but I feel [September 11] would have no impact on any of the movies that we're seeing now. Several action movies being released since then have done extremely well, such as "Black Hawk Down". I think that also after the terrorist attack, we've seen video sales and rentals skyrocket, especially of movies that dealt with terrorism. So I think with movies you can resolve those things much quicker, and give audiences satisfaction, at least in a fantasy way. "

"Collateral Damage" tells the story of family man and fire-fighter Gordon Brewer (Schwarzenegger), who is plunged into the complex and dangerous world of international terrorism after he loses his wife and child in a bombing credited to Claudio "The Wolf" Perrini (Cliff Curtis). Frustrated with the official investigation and haunted by the thought that the man responsible for murdering his family might never be brought to justice, Brewer takes matters into his own hands and travels to Columbia to track down the terrorist. He laughingly admits to taking on his project because of his wife. "I have to blame her for that because she brought it to me. She is friendly with one of the producers who gave her the script. There was a time when Harrison Ford was attached to it and when my wife hears there is someone else attached to something she is very competitive and chases the script down like a greyhound. Every day when I was reading scripts she kept bringing me this script and said I should really read it...and I said 'you read it, I've got all these other ones and if you think it's good then let me know.' "

Schwarzenegger loved the idea of a playing a fire fighter [originally his character was a more mundane basketball coach]. After September 11, fire fighters have taken on a greater resonance.

You play a firefighter in this film. Do you have any affinity for the firefighters? Have you met them?
"14 days or so after September 11, I went to New York's Ground Zero to walk around that area where the twin towers went down and to visit the firefighters and rescue workers. Then I went to various different fire stations after that to visit the firefighters and to see all of the shrines that they had, because each of the places I visited had at least 10 or 15 of their officers who lost their lives in this tragedy. I have to say, I was so excited about the fact that I play a firefighter, because originally when they re-wrote the script, you know, there were people who said, "Firefighter? Isn't it better if you are a CIA guy?" And I said, "No. I think it would be more fun to play an ordinary man who saves lives." It's also heroic. I like the idea of playing the ordinary guy. So then there was this doubt about "Is this heroic enough?" Then when this happened on September 11, I think now the world has a whole different picture of firefighters. So I was very glad I chose that because it is a heroic profession. I remember I was big fan of "Backdraft." You could see the things people were doing."

It's another physically tough film for the star, but despite his heart surgery, Schwarzenegger had no qualms about getting rough and physical, surgery or otherwise. "First of all, the heart surgery was five years ago. Number 2, I think it was very clear that when you get your valve replaced you don't have to change your life. Especially if you have the right doctor. And he [the doctor] always said to me, "I'm gonna fix it so that you can continue doing your action movies." And I was like, "Then you are the doctor who is gonna do it." So when I heard that, you know, others would say you have to do this or you have to change that or you can't smoke your Stogie any more...I said "Thank you very much, but no thank you." So I finally found the right guy. And the fact of the matter is nothing did change. I am on no medication. I didn't have to alter my life. The only thing that he suggested was that instead of pushing heavy weights and doing 10 reps, why don't you use half the weight and do 20 reps in weight training. So that's the only thing that I changed. Everything else, all my other activities stayed exactly the same."

And Arnie still loves his cigars. "I smoke - not only because of the heart, but when you get older I think it is better to slow down - so I smoke one cigar a day now, where I used to smoke three. Then I cut it down to two, then I cut it down to one. Maybe eventually I cut it down more or make them smaller. But other than that, I do the action the same way, in the movies. I prepare for it the same way and the things that I feel I can't do or that might be too dangerous to do I let someone else do it. It's the same rule I always had."

Schwarzenegger may have lost some of his box office lustre, but that didn't stop the producers of Terminator III to fork up $US30,000,000 as the star's upfront fee. The actor feels no pressure with such a high salary, he says. "I feel good about it. I would feel much more pressure if I was getting NO money; I never feel pressure with money. I make the choices available for them to give me the money or to give me the back end, so it's up to them which way they want to go. I rather prefer to have them put in the budget of a movie and you know, see it on the screen rather than give it to me, but that's not the preference they have." Money notwithstanding, Schwarzenegger is excited about T3. "It's terrific and we expect to shoot soon."

Schwarzenegger still remains a larger-than-life influence on popular culture. Beyond movie stardom, the actor is also happy to keep his feet in politics. "I always love politics and will continue to be involved in my activities in the inner city, creating after school programs in inner city areas in 15 different cities, 400 different schools. I will continue working on that initiative because I am putting out a ballot next November in California which is an after school education and safety act to get $550 million for all school children in California, elementary school to after school program between 3:00 p.m. and 6:00 p.m. because after school is very important so we can get rid of some of the youth violence and give parents time to float around. Those things, if I were to run for office, in two or three years I would know. First, I want to do a few more movies, especially those that I have signed deals with a year or two ago, so I have to be done and I am looking forward to doing films like Terminator 3."

After that, we could see Arnie for President?