Give Them Something More Than Princess Stories and Sparkles

In a world where young girls are often faced with a choice between reading either books about dumptrucks or sparkly stories about unicorns and BFF's, two young women have banded together to bridge the gap for girls by creating an imaginative storytelling game that is not only fun and sparkly but also inspires curiosity about STEM concepts at a young age.

Co-founded by friends and former Google colleagues Annabel Blake (researcher and strategist) and Deborah Ho (designer), Little Literature Co is an award-winning new company born out of a shared belief that there had to be a useful and fun way to combat gender bias in our community and workplaces, and that for effective change to happen it needs to start with engaging young learners.

Little Literature Co combines the principles of traditional storytelling with ideas of science, environment, biology and maths with a refreshingly new and exciting approach. Their first product, Talu Tales, is a series of storytelling card games that introduce STEM concepts and creative thinking to children through play. Thoughtfully created, designed and packaged, Talu Tales is something they wish had been on offer when they were young girls, and they now hope to cultivate an interest in STEM for the next generation of learners.

Co-founder Annabel Blake says "Limiting girls access to inspiring STEM play, and educational opportunities impacts their self-confidence, success as learners, and contributes to a stereotype that science is for boys. Instead of seeing pink, sparkles and cute puppies as mutually exclusive to science, black holes, and exploding stars we set out to design a game that had it all- so that all children, no matter their interest, could be curious and learn about STEM on their own terms".

By the time girls are selecting their subjects in secondary school, they've already 'learned' through play and reading that STEM is not for them.

- STEM toys are currently three times more likely to be targeted at boys than girls
- Girls as young as six don't think they are as smart as boys
- When asked to draw a scientist, two-thirds of children aged 9 to 11 draw a man

STEM-based ideas, creative thinking and problem solving are tools EVERY child needs moving into the future and until now girls have often been left out. Talu Tales empowers young girls by creating a pathway for engaging in STEM at school and beyond. And at a time when women make up only 27% of the STEM workforce, it's clear that when we leave girls out of STEM inspired play at a young age, we leave them out of STEM for life.

Playful, fun and engaging, Talu Tales will inspire children and adults alike to tap into their creativity and connect in a meaningful way that makes their own imagination sparkle.

Question: How are you working to help bridge the gender gap?

Annabel Blake: Whilst Australia loses female talent at every stage at the STEM pipeline, differences in STEM interest, self-concept and positive feelings towards science begin in the early primary years - at an age where we're first figuring out who we are, where we fit in, and what we can bring to the world.

Gender stereotypes in children's literature means that little girls are less likely to read stories with female leads and STEM toys are 3 times more likely to be marketed towards boys. Together, this sends the message to girls that STEM inspired play and leadership is for boys only.

We believe that equal opportunities in play and in storytelling is an important foundation to set girls up to confidently engage with STEM. So we set to work designing a series of games and stories that share the message that girls belong in STEM, in positions of leadership and that princesses can live on the International Space Station! 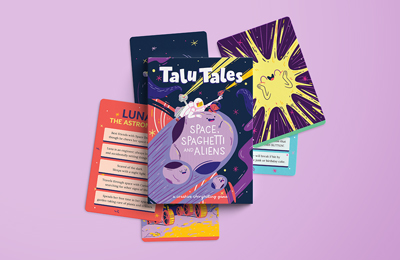 Question: Can you tell us more about the game, Talu Tales?

Annabel Blake: Talu Tales is a set of creative story cards, that inspires players to invent stories and go on storytelling adventures set in space. Each card introducers players to a new story element; a character, setting, item or action.

To play, storytellers pick their favourite cards and combine them to begin their story, as players tell their story, they'll come across a tricky action card! The action cards are filled with wicked problems that the players have to solve, like rescuing their character from a black hole, or dodging a meteor shower! Through fantasy problem solving, players build confidence in their abilities to overcome challenges.


Question: What inspired the creation of Talu Tales?

Annabel Blake: 2 years ago I was nannying a 4 year old girl who read princess books every night. One night, we got bored and decided to raid her brothers bookshelf. There we found books about dump trucks, poisonous snakes and space. At first it seemed like nothing interested her, but soon I discovered that there were small elements in each that she was curious about! The cute bug from this book, the cat from another and a female scientist.

I took these bits out, drew them on small pieces of paper, and we began to mix it into a story. The next day, I shared these pieces of paper with Deb, and we began to build the world out. Instead of seeing pink, sparkles and cute puppies as mutually exclusive to science, black holes, and exploding stars we set out to design a story that had it all.

A few months later, the same girl had taken the cards to preschool (proudly!), was telling stories about space, and had switched her princess costumes for a Queen Cleopatra dress up. That change really inspired us. We founded Little Literature Co. because we were both similarly passionate about closing the gender gap- and we believe stories are a powerful tool to create change.


Question: How vital is encouraging creative play in childhood?

Annabel Blake: Play is how we test out the world, and isn't just for children! Through imaginative play we discover skills and abilities we didn't know we had. A young child who works out how to stack a tower super super high, might one day be an architect designing sky scrapers. A young child who spends time looking after their stuffed animals, might one day be a vet.

More than just frivolous fun, studies have demonstrated that children who were in active play for 1 hour per day were better able to think creatively and multitask. And more recently, doctors have even been advised to write 'prescriptions for play' during the early developmental years in a bid to increase collaboration, problem solving and creative thinking abilities.


Question: How important is an early introduction to STEM tools?

Annabel Blake: It's never too early to begin engaging with STEM in the home. Children are natural born scientists, and are already testing their hypotheses about the world around them!

The National Science Teachers Association(NSTA) recommends providing children with the opportunity to engage in science exploration and play in the home from the age of three, laying the foundation for a progression of science learning throughout their lives. Yet at the moment, STEM tools aren't equally accessible to both boys and girls. This means that boys begin to practice STEM skills such as spatial abilities from an earlier age, potentially contributing to a later differences self-confidence.


Question: How can parents use STEM tools to connect with their kids?

Annabel Blake: STEM skills extend well beyond the 'hard' skills like coding, and there are many ways children can engage with STEM ways of thinking. Skills like creative thinking, inquisitiveness and flexible thinking will provide a strong foundation before children begin to pick up the Bunsen burner.

The best STEM 'tool' is the question! Next time a child is facing a challenge, like not being able to reach something- it's an opportunity to ask together 'hmmm, how might this be reached?'. And remember, there's no single 'right' answer!


Question: Can you share your top tips for engaging kids over the holidays without screens?

Annabel Blake: Here are some of our favourites! Invention challenges: Set out craft materials (paper, pencils, tape, recycling) and propose a challenge (Dogs get sad when their owners and kids leave. Design something to keep dogs happy).

Obstacle courses and Rube Goldburg machines: these might be best outside! TV Improv: cut out the shape of a screen/TV and stick it to two sticks to prop it up. Pretend to flick through the channels as the kids have to put on different TV shows for you.


Question: What's next for you both?

Annabel Blake: Now that our space pack is out, we've been developing the next extension of this world: underwater explorers and Ancient Egypt! We've also been hearing from storytellers what their favourite story plots and characters are, to share those stories more widely as storybooks. Stay tuned!