A new report from Royal Life Saving Society – Australia reveals that 965 children aged 0-4 years drowned in Australia between 1 July 1993 and 30 June 2018. Accidental falls into water were recorded as the leading activity resulting in drowning.

Summer is just around the corner which means many more families will be spending time around the pool and other waterways to cool off.

Royal Life Saving is launching the Keep Watch campaign, urging parents and carers to supervise children at all times around water.

A lapse in adult supervision was the major risk factor in 100% of toddler drowning deaths.

"It can only take a few moments for a child to slip away unnoticed, fall into the water and drown", said Justin Scarr, CEO at Royal Life Saving Society – Australia.

"Drowning is often quick and silent. Distractions like browsing social media on your phone, attending to another child, or ducking inside to grab something can have tragic consequences if a toddler is left unattended by water. It's important for parents and carers to take extra safety precautions. Always Keep Watch of children around water" said Mr Scarr.

"Active supervision is the best protection against child drowning, however kids can be quick and hard to keep up with so it's vital to fence pools and spas to prevent children gaining access. Regularly check that your fence and gate are in working order, and never prop the gate open" said Mr Scarr.

The shocking research report has also revealed that for every fatal drowning there were an estimated 7.6 non-fatal drowning incidents resulting in hospitalisation. That is approximately 7,361 children who suffered a non-fatal drowning over the last 25 years, many live with a permanent disability as a result.

"These figures are horrifying, and while we have seen the rate of unintentional fatal drowning among children under five decline by 67%, it is still unacceptably high" said Justin Scarr, CEO at Royal Life Saving Society – Australia.

"Such reductions have been possible due to a concerted effort in areas such as government policy and enforcement, public awareness and education programs such as Keep Watch, advocacy and research. The introduction and subsequent strengthening of pool fencing legislation, including the introduction of swimming pool registers and inspection regimes, has contributed to making the home pool environment safer for young children," said Mr Scarr.

"If the rate of drowning we had twenty years ago, continued today, there would have been 70 deaths, more than four times the 18 young lives lost last year. This is substantial progress, and many lives have been saved, but we won't stop campaigning until it is zero," said Mr Scarr.

Although there has been a significant reduction in the rate of drowning among toddlers, drowning remains one of the leading causes of accidental death of children aged 0 - 4 years old. 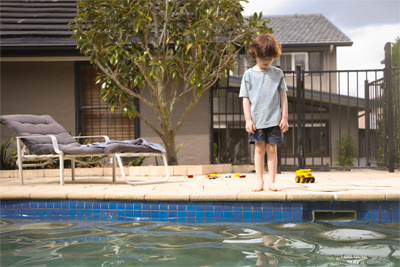 Question: What surprised you most about the new Royal Life Saving Society report?

Amy Peden: I am familiar with the child drowning issue and statistics as a researcher, but even I was shocked to see just how high child drowning used to be. In 2017/18, we recorded a record low of 18 drowning deaths among children under five, however this figure has been as high as 68 deaths in the 1995/96 and 1996/97 financial years. While it is pleasing we have come so far and achieved such significant reductions, 18 lives lost is 18 too many. As all child drownings are preventable, it's our job to educate parents and carers, particularly new parents, of the risks and how to keep their young ones safe around the water.


Question: How can we reduce this figure in 2018 and in the future?

Amy Peden: The introduction of pool fencing legislation, education programs, and awareness campaigns such as Keep Watch have helped to reduce the number of toddler drowning deaths over the past 25 years. We need to continue to strengthen legislation, and educate parents and carers on water safety and drowning prevention initiatives.


Question: What is the main message you hope to share from this years Keep Watch campaign?

Amy Peden: Preventing accidental drowning requires multiple layers of protection. Active supervision is the best strategy for preventing child drowning. Parents and carers must give all of their attention, all of the time whenever children are around water. The majority of child drownings occur in the home environment so it's vital to fence pools and spas to prevent children gaining access if supervision should fail. Regularly check that your fence and gate are in working order, and never prop the gate open.


Question: At what age should children begin swimming lessons?

Amy Peden: Generally, most swim schools offer programs that commence from the age of 6 months focusing on water familiarisation with parent or carer involvement in the water. Independent participation with an instructor is usually around the age of 3 years. Royal Life Saving research found that children were stopping lessons before achieving essential swimming, lifesaving and water safety benchmarks. Starting swimming lessons from a young age is great, although it's important for children to continue with lessons regularly in order to retain and develop vital skills. 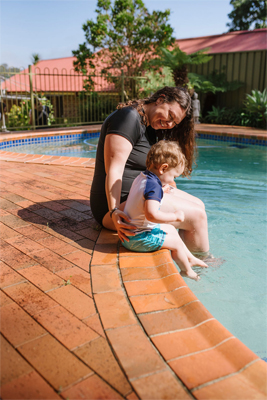 Question: What water awareness tips need to be taught to toddlers?

Amy Peden: Water safety tips for toddlers should be simple and clear, focusing on 'Never go into the water without an adult'. At the pool, they should be taught to wait until an adult is in the water and invites them to enter. At the toddler stage the focus should be building strong and competent foundation skills. Foundation skills should include breath control, floating, submersion, orientation, kicking, paddling, safe entry and exit. During lessons, flotation aids such as floaties or back bubbles should be avoided. Children need to experience their personal buoyancy and not become reliant on flotation aids. These can hinder progression and provide a false sense of security. Such aids may be used during playtime to increase confidence and independence but children must always be supervised regardless.


Question: How can parents increase safety around swimming pools?

Amy Peden: Swimming pools are the leading location for drowning deaths among young children in Australia. Faulty or propped open gates are the primary risk factors in home pool drowning deaths of young children. You can't be complacent. Regularly check that your pool fence and gate are in working order, and keep them maintained. You can download Royal Life Saving's Home Pool Safety Checklist to conduct a self-assessment. Actively supervise children whenever they are around pools, have a designated supervisor if you're in a group, and never leave older children in charge of younger children.