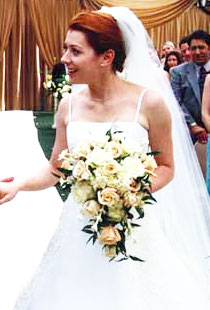 It was the end of a long day for 29-year old Alyson Hannigan, sitting in a Los Angeles hotel promoting the third - and most likely final - installment in the successful American Pie franchise. But this time around, the focus is different, and Hannigan has far more to do than sprout her charmingly laid back 'this one time in band camp' lines. Alyson's nymphomaniacal Michelle is getting married to still accident-prone Jim [Jason Biggs] in American Pie - The Wedding. Convinced the franchise would not only never get this far but even more convinced it would develop without Hannigan, the pretty actress just fell in love with the third script "which is what it all boils down to, "and besides, everybody wants to be in a trilogy don't they?", adds Hannigan, laughingly. The actress was also attracted to the evolution of hers and Jason's characters. "It's so sweet and I loved the way they ended up together," says the smiling actress. But some things never changed during the three films: As sweet as American Pie - The Wedding is, don't be fooled; it's not all sweetness and light. Fans will still get plenty of the franchise's trademark raunchiness, including some wicked moments from Hannigan. "I love the shock factors and that Michelle is just OK with every aspect of herself, especially the sexual side." Hannigan says there are aspects of Michelle she can relate to, and admits that while appearing shy and introverted, Hannigan has a wild side "There's a very wild side to me, but it's calming down," she says, laughingly.

Yet ultimately, Hannigan's Michelle ends up with her perfect wedding, and in real life, Hannigan is about to tie the knot for real, with fiancé Alexis Denisof, whom she co-starred with on Buffy. While not disclosing a specific date for her real-life nuptials, Hannigan says that her dream wedding is not as grand or lavish as its fictional counterpart on screen. "You know I'm going to do very natural settings, like outdoors, just fun. I'm not a traditional wedding girl; we just wanna express how we are in our life and it's going to be very nice." At 32, Alyson says that it's the right time in her life for marriage and that it was never something in the forefront of her mind when she was younger. "It wasn't an important thing for me until I met Alexis. I would think about things in relationships, and tended to ask myself: Would I ever marry this guy and if the answer was no, then the relationship died pretty quickly. It was just: All right, we'll ride it for the fun wave and then when it starts to become work, I'll bail." That is, until Alexis came into her life and there was no need to bail "because it was worth it. I love just exploring us together and I know he's the one for me," despite the fact that Hannigan was determined never to date an actor. "I just thought it was a bad idea, and besides, most actors are really annoying, so they were never attractive to me. But I was just instantly attracted to him and we were friends for a year and a half before we dated which I recommend, because you really just get to know the person and then if they're still there, that's a really good sign."

Hannigan has established herself as one of Hollywood's most interesting performers. A native of Washington D. C, she moved to California at age 10, and somehow knew instinctively that her role in life was to perform. "I never questioned that I liked it," she says emphatically. "I would just sit at home and perform for my invisible audience and was convinced that somebody had to be watching me somewhere." As Hannigan's parents were photographers, it afforded her the chance to become comfortable in front of the camera. After a brief modeling career, she did commercials prior to her movie debut in 1988's My Stepmother is an Alien. But the once unknown Hannigan burst into our consciousness as the initially shy and insecure Willow in 1997's Buffy the Vampire Slayer, a role she won following an intense audition process. Though she thought the series would be short-lived, Hannigan immediately fell in love with it, and Willow, "because it was so good and it was the most amazing thing I had ever worked on at that point, so I was getting to do what I loved to do on a really good project." Hannigan also loved the fact that Willow was allowed to change in some huge ways. "I mean she started as this sort of shy wallflower that couldn't even speak around boys and then evolved into this lesbian witch that tried to destroy and save the world many times." And Hannigan changed just as much as her character. "I started the show when I was about 22 I think and they were just amazing years. I met friends that I will have for the rest of my life, I met my beloved and I just learned so much about the process and the business." The show's finale here in the US garnered strong acclaim, and Hannigan says it was the right ending for the show's legion of fans. "Last year I couldn't have sat with you and said oh, I would love for the show to end the way it did, but I am so happy it went out that way and I think it was just a really nice way to end it." And there's no likelihood of a Willow spin-off, Hannigan insists. "God, I got to do so much starring the seven years in Buffy that I can't see that and I wouldn't want to ruin that by risking something that might not be as good."

In between wedding plans and promoting American Pie - The Wedding, Hannigan has little time to think of much else, though says that she is going to give careful thought as to what her next screen role will be. "I'm really concerned about what my next move is, as this is a really critical time. I had an amazing offer for another one hour TV show and I just couldn't do it because after seven years of doing the one hour schedule, I can't go back into it right now; I would never see my future husband and so I'm going to explore other things." Her only fear, Hannigan confesses, is becoming what she despises the most: A movie star diva. "I don't want to start believing what you can believe in this business; I want to stay true to who I am, by trying to be in the moment. As soon as I start believing my shit doesn't stink, I want to go away. I love this profession, but God, it can just destroy people and I don't want that to happen and become some monster."