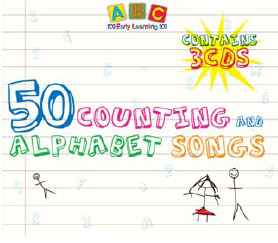 Words and numbers are a fascinating mystery that children are determined to solve.

50 Counting and Alphabet Songs boxed set contains three albums, Spelling Bee, Numbers Rumba and Time and Space songs. Featuring a diverse mix of fun songs that teach letter and word associations and help build a rich vocabulary. Also featured are songs which bring music and maths together to create an exciting new learning environment for children and teach many concepts essential for children starting school, empowering them with knowledge.

Spelling Bee combines a sound educational strategy - which complements that used in schools and preschools, including starting letters and phonics - with appealing lyrics, catchy music and an incredible sense of fun.

Spelling Bee is an album specially designed for todays kids. Its fast-paced, with plenty of humour, funky music, and heaps of opportunities to interact. There are also lots of intriguing images presented in the songs, all intended to consolidate understanding and knowledge.

Tracks include "Three Letter Pets" - teaching children to spell by utilising the familiar words they use for their pets - the funky "Hi My Name is Joe (I Work in a Spelling Factory)", "A Sailor Went to CCC" - about the letter C - and the South American-inspired "The Letter L is Fun to Spell".

Kids will already be familiar with "The Alphabet Song" - which has helped kids to learn their alphabets for generations now. "B-I-N-G-O" is another old friend, as is "She Sells Sea Shells", used to help kids become familiar with the letter S. Theres also a new version of "Ding Dong Dell", focusing on the letter D, and a fun version of "Peter Piper" that will have children in stitches.

On other Spelling Bee tracks, familiar songs have been adapted to teach new concepts while allowing kids to stay in their comfort zone. They include "Here We Go Finding Rhyming Words", "The Farmer Learns to Spell" and "Twinkle Twinkle I Am T".

Numbers Rumba
Numbers Rumba, is a sensational mixture of music, numbers, counting and cool Latin rhythms. The songs are so catchy that the albums bound to be a hit with the kids, and theyll learn some of the basics of maths and numbers without even trying!

Aimed at the junior primary school age group - preschool to Year 3 - Numbers Rumba is an innovative and dynamic approach to learning.

It covers a wide range of concepts, from time ("We Need a Clock") to the sometimes difficult subject of fractions (dealt with in the sultry and very appealing "Fraction Action").

"Work it Out" encourages children to stop and work out a problem before deciding they cant do it, and the albums wonderful first track, "Numbers R 4 Counting" provides a great introduction to maths and numbers.

Times tables are almost unrecognisable on "Give Me 5 (Times)", "10 Times", "1 Times" and "12 Times", introducing kids to the patterns of multiplication, and "Double Fun Fandango", explores the concept of doubles.

There are also plenty of songs that simply make numbers fun, including "This Old Manbo", "Sing a Song of Numbers", "Dr Knickerbocker" and "12345".

Time and Space Songs features 20 wonderful songs about time, shapes, seasons, days of the week and positions in the world. All the music on Time and Space Songs is catchy and simple, to make it both appealing to kids and easily accessible to their developing minds.

This stimulating, informative and above all entertaining album is a fresh new way for children to explore time and space, and to come to terms with their place in the world and in time. 50 Counting and Alphabet Songs boxed set has proven content to keep children involved for hours while learning their ABCs and 123s and is designed to hold children's interest again and again.