Let's be honest, the girls can keep up with the boys any day of the week, especially when there's motivation involved. There's no better motivation than bachelorette party drinking games. Some games are designed to help the drinks go down as quickly as possible while others are meant to generate hilarity. Browse our suggestions and find the drinking games that suit your group best.

Some bachelorette drinking game ideas are custom-tailored for the club or pub, and this is one of them. The rules of this game are completely customizable and can be as simple or complicated as you wish.

These are just examples of course, but you can see how fun drinking bridal party games can be. Fair warning: the more rules there are the faster the drinks will go down.

Bachelorette party bar games can get out of hand rather quickly. To avoid having to end the night early to take one of the girls home, keep things simple to start.

OK, so this isn't the most original bachelorette games ideas, but it's a classic! In fact, the majority of college drinking games can be transformed into perfect bridal party games with just a little twist.

If you've never experienced it, it's pretty easy.
You can play this 1-on-1 or as teams. Place a single (or series of) plastic cup(s) filled with beer on either side of ping pong or similarly sized table, and take turns bouncing a ping pong ball across to the other side. If you manage to land the ball in one of the cups, the other team has to chug its contents.

This drinking game is a particular favorite because anybody can play, it keeps everyone on their feet, and it can get rather competitive...in a good way.

Never Have I Ever

These are the types of drinking games for bachelorette parties that cause immediate bursts of laughter.

The maid of honor is the most logical person to start the game. She'll make the statement "never have I ever…" and finish it off with a statement she's not guilty of, like cheating on her boyfriend.
Any girl in the group who can honestly say the same must drink.
You can set rules about what's off-limits ahead of time but, honestly, the game is much more fun and revealing without limits.

Pin the Kiss On Ryan Gosling

All you need for these funny bachelorette party games are as many bright shades of lipstick as there are guests and a printout of that Hollywood hunk Ryan Gosling.

This follows the same rules as pin the tail on the donkey. Each guest takes turns applying the lipstick (a different shade so that you can tell them apart), spinning around in a circle a few times, and trying to plant a kiss as close to his lips as possible.

The closest player wins! The others have to take a shot.

Of course, if Mr. Gosling doesn't float your boat there are plenty of other hot Ryans - Phillipe, Eggold, Hurst, Reynolds) to choose from. 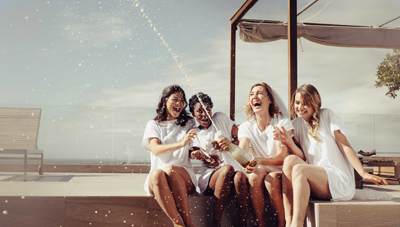 These types of bridal shower drinking games require a little knowledge of the bride's dating history. The entire party takes a shot at the same time to start things off. The last one to finish draws the name of one of the bride's ex-boyfriends from a bowl and does her best to act out the gentleman in question. As the player acts out scenarios, habits, and mannerisms without saying his name the girls shout out who they think it is.

Whoever gets it right assigns a shot to another player and starts another turn.

Lick It Stick It

This bachelorette bar game is not for the faint of heart. It starts with two players sticking a playing card to their forehead. You can't see the number on your own head, but you can see your competitors.

The trick is to guess if your card is higher or lower. If you are correct, you're the winner and nothing happens. If you're wrong, however, you must drink the number of shots that you're wrong by.

For example, if you have a 2 on your forehead and the other player has a 7, that's 5 drinks you have to take. You may want to start with shots of beer instead of vodka.

The key to a good bachelorette drinking game is to pace yourself. Taking care of a sick friend is definitely not one of the bride's wedding shower wishes. If the games you choose require a large volume of drinks, choose something lighter like wine or beer. Make sure to keep active, drink water in between rounds, and keep the appetizers coming so that everyone stays in good shape throughout the night. Happy gaming!