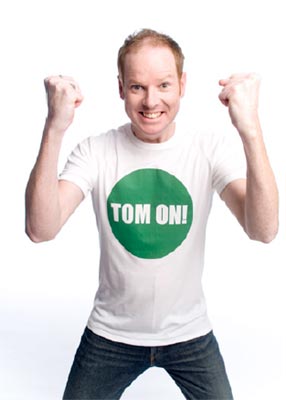 Australian comedian and television personality, Tom Gleeson is making a bee-line for the Sydney Opera House.

Over Christmas and New Year last year, Tom was invited to the Middle East to entertain the troops. He went to Iraq, Kuwait, Afghanistan and other dangerous places nobody dares go. Now he's back safely on Australian soil, he's bursting with unbelievable stories and tales of near death encounters, dodgy politics and tank driving, of course!

With a 2007 Helpmann Award nomination for Best Comedy Performer under his belt, wit as his weapon of choice, and humour as his hand grenade, Gleeson goes straight to the comedic front line with all guns a-blazing.

In addition to his stint in the Middle East, Tom has performed in every capital city in Australia, as well as London, Edinburgh, Montreal, New York, Los Angeles, Singapore and Jakarta - even collaborating and performing with Seinfeld's Jason Alexander as part of the sold-out Jason Alexander's Comedy Christmas.

You might know Tom as the Australian Fast Bowler from Channel Ten's Skithouse, or as Australia's Brainiest Radio Star, or as a regular on Channel Nine's Big Questions. He has also appeared on Rove Live, The Glass House, Sunrise, World Comedy Tour and the Melbourne International Comedy Festival Gala.