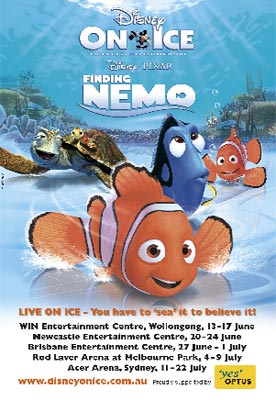 You loved the movie, now see Nemo and friends live on ice, when Disney on IceSM presents Disney/Pixar's Finding Nemo dives 'down under'!

Join the adventure from the Great Barrier Reef to Sydney Harbour and back, as lucky-finned clownfish Nemo and his overprotective father Marlin set off on a comically courageous quest to reunite, and are helped by friends, Dory, Crush, Bruce, Squirt and the Tank Gang.

Based on the Academy Award®-winning film, Disney On Ice presents Disney/Pixar's Finding Nemo features an international team of award-winning figure skaters, innovative costume design, artistic choreography and a breathtaking aquatic backdrop. You'll be amazed as a skating school of moonfish, break-dancing sea turtles, balletic jellyfish and an aerial silk act make you feel like you've been submerged deep into their underwater world.

"We combine digital projection, choreography and the most unbelievable costumes ever seen, and the result is a visual masterpiece that will truly transform the ice surface and take audiences through the ocean and into the aquarium" says Producer Kenneth Feld.

Don't miss out, it's ocean-sized fun for the whole family! 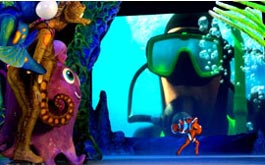 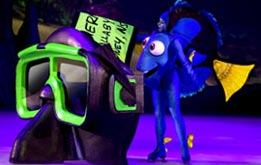 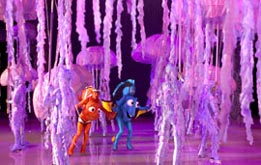 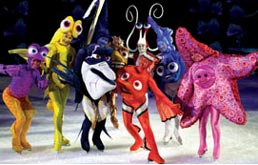 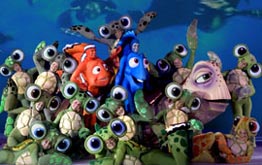 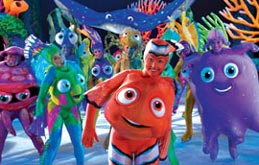 With an array of vibrant color, Costume Designer Scott Lane has designed costumes for Disney on IceSM presents Disney/Pixar's Finding Nemo, produced by Feld Entertainment, Inc., that are theatrical and skateable at the same time, allowing style and movement to blend cohesively into one.

Inspired by the innovation of the revolutionary film, Disney/Pixar's Finding Nemo, Lane saw this as an opportunity to add a new dimension to the more than 60 costumes he designed for the show. Integrating the human into the costume, he developed a way to portray each character while also incorporating the skater's face to allow for more physical flexibility and range of emotion.With a core design of the character's face on the breast plate of the skater, Lane had to ensure accuracy did not get lost during movement. "When a skater skates, he leans forward and spends most of his time in a lunge-down position, his body angled towards the ice," Lane says. "So, we spent a lot of time trying to figure out the correct angle of positioning the fish on the body so that when the skater skates, the fish is not staring at the ice."

Using backpacks with steel rods in them, Lane was able to support the back portion of the fish, or the fin, so that it remains vertical at all times. He added springs and hinges to give the fin movement, enabling it to simulate undulation in water. Furthering the effect of fluidity, the skaters don a variety of costumes made from stretch fabrics, such as baby spandex and stretch velvet, in order to appear sleek as they glide across the ice.

Incorporating into the costumes "just about every bright color in the rainbow," Lane immerses the audience underneath the Great Barrier Reef. Sea creatures introduce the oceanic adventure in a wave of fluorescence, and Nemo's school pals - from an inking octopus to an H20-intolerant seahorse - are a mixture of many spectacular species and shades. In contrast, the school of moonfish in the show are similar to one another, and because in reality their scales reflect light, Lane has designed the costumes to glow as they move in perfect synchronization.

The skilled designer brings the same sense of sparkle to Nemo's friends in the dentist's aquarium - the Tank Gang. Capturing the playful personality of each one, he brings their physical characteristics to life. A tough yet regal moorish idol and an excitable blowfish are just a few of the creatures Lane replicates inside the aquarium in a style all his own.

Lane leveraged the sea turtles along the East Australian Current to add yet another costuming dimension in what he considers a rockin' fun number. Because they have shells on their backs, rather than fins, the turtle costumes relate the most to the human shape and free up the skaters for more mobility. The turtles spin and slide on their backs, and together are able to show another side to life within the sea.

Though proud of all his designs, Lane considers the costumes in the jellyfish sequence a personal favorite. For the "squishy" sea creatures Marlin and Dory encounter, Lane incorporates pastel pinks and purples, and creates jellyfish that bounce and sway with every minute movement. In artistic attire, the skaters hold the lightweight fabric in the air, and fill the entire sheet of ice in a captivating display.With years of experience designing for the Tournament of Roses Parade and several Broadway and Disney On Ice productions, Lane made sure, as always, to keep the costumes as light and as streamlined as possible. With the mantra of "Keep it simple," the former actor himself has learned through experience that simple is best when developing costumes for a show.

Lane tried to put very little structure into the aquatic costumes in order to mimic the natural movement in water. For him, when the skaters take to the ice, the wind movement they create is replicative of the motions that occur underwater. He tried his best to take advantage of this and not stop it or try to compete with it.

To prepare himself for the pioneering project, Lane and his young daughter watched the film, Finding Nemo - "over and over and over." They also went on a field trip to a local aquarium in Long Beach, California, so that Lane could study the fascinating world under the water. Lane is excited to see the audience reaction to this unique approach in his fourth Disney On Ice production.

He says, "They are going to love it! No matter where you are sitting in the arena, the costumes and the make-up on the skaters' faces come together and are a complete blend. You see the skater's face and you see the character's face, and you are satisfied with both. It creates a show that is unlike anything else - theatrical entertainment for every fish in the sea."