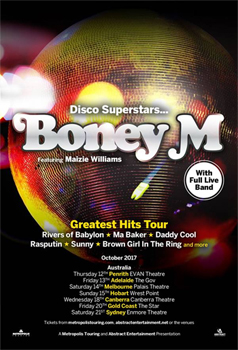 Boney M (Feat. Maizie Williams) are back performing all of their Greatest Hits across Australia. With multiple sellout shows and rave reviews from their last outing, the Euro Pop superstars bring with them their incredible run of chart-topping singles that are sure to have you on the dancefloor. Their high energy, sing along shows feature outrageous costumes and a wicked live disco-funk backing band. This makes a Boney M live show an out of this world and unmissable experience.

Boney M's insanely catchy songs gave them an amazing run of chart success in Australia. Their first single 'Daddy Cool" went to Number 5 and the follow up 'Sunny" made the Top 40. 'Ma Baker" gave them another Top 10 in 1977. The following year they went on to achieve a remarkable feat - 2 Number 1's! The double A-side 'Rivers of Babylon" with 'Brown Girl In The Ring", and the disco stomper 'Ra-Ra-Rasputin" (aka Russia's Greatest Love Machine). Boney M became massive in the clubs, at parties and all over the airwaves. They were bigger than KC and the Sunshine Band, Earth Wind and Fire and Chic! Their Australian chart domination continued with 3 more Top 40 singles -'Gotta Go Home", the huge worldwide Xmas #1 'Mary's Boy Child", and sing along anthem "Hooray! Hooray! It's a Holi-Holiday".

After selling millions of records to an adoring fan base and a mind-blowing collection of disco and pop super hits, the Boney M phenomenon has been growing by the decade. Boney M's music has been sampled by Lady Gaga sampling 'Ma Baker" for her international number 1 hit 'Poker Face", and dance duo Duck Sauce sampled 'Gotta Go Home" in their dance floor smash 'Barbra Streisand'.

Always fun and perfect for the dance floor, Boney M are one of the most beloved bands to emerge from the iconic Disco era. So strap on your dancing shoes Australia, Boney M are back bigger, better and more outrageous than ever. This Greatest Hits Tour is guaranteed to deliver an experience you don't want to miss.