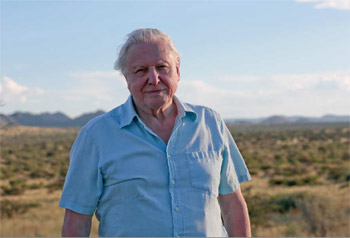 'Out there is a story far richer than our own – brought to life by Life Story. The story of many lives. One epic journey. Far beyond the reach of the city it plays out under the light of the sun and of the moon. A festival of life, it embraces intricate stories of family, of survival, of impossible strength and breath-taking beauty."

Sir David Attenborough's introduction to the BBC Earth's Life Story Installation The soothing sounds of Sir David Attenborough will be heard throughout the Argyle Cut in The Rocks, with the world-famous natural history filmmaker to narrate the BBC Earth's Life Story installation, created by Spinifex, at this year's Vivid Sydney from 22 May to 8 June, the world's largest festival of light, music and ideas.

Sir David will take audiences through the captivating footage from BBC Earth's visually stunning production Life Story and the mesmerising imagery of fractals, created in nature through the flow of energy; recognisable textures, colours and shapes intertwine to create one continual and seamless
projection.

Destination NSW Chief Executive Officer Sandra Chipchase said, 'BBC Earth's Life Story will transform the Argyle Cut into a striking landscape, teeming with bird, marine, and animal life. These
amazing projections will now be accompanied by narration from Sir David Attenborough and this is set to be an engaging experience for visitors to Vivid Sydney."

`Shot over a four year period in ultra-HD, immersive cinematic techniques have been used to reveal animals in their worlds. The result is a series that contains some of the most stunning images of the natural world ever captured.

The Life Story installation captures this epic journey through the lens of time and discovery. Utilising the unique opportunity that Sydney's Argyle Cut presents, these themes are explored through the creation of a spiralling vortex.

Artist render of BBC Earth's installation showing footage of a Bauer Bird from Life Story BBC Earth's Life Story, which was broadcast in the UK last year and will be shown soon in Australia
on Channel Nine, is the epic narrative that unites all creatures: the journey through life, the struggle and the mission to leave offspring – the next best thing to immortality.