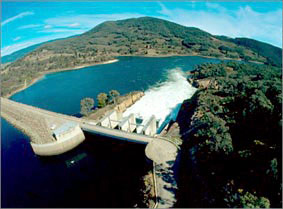 The Australian Government is preparing to sell off Australia's most precious resource.

The Snowy Mountains Hydro-Electric Scheme is by far the largest engineering project ever undertaken in Australia. It is also one of the largest and most complex hydro-electric schemes in the world.

The system's construction is seen by many as a defining point in Australia's history, and an important symbol of Australia's identity as an independent, multicultural and resourceful country.

The Snowy Scheme is also considered economically important for Australia. It supplies vital water to the farming industries of inland New South Wales and Victoria. The system's power stations also produce up to ten per cent of all electricity needs for New South Wales.

So Why does the Government what to sell it off?

The hydroelectric scheme is jointly owned by the New South Wales, Victorian and federal governments, which have decided to sell their shares by floating the company on the Australian Stock Exchange. The sale of the Snowy Mountains Scheme will bring in 3 billion dollars for Australian Government, BUT AT WHAT COST?

For those of you who are still in the dark WATER is fast becoming the most precious and valuable resource in the country and on the planet.

Although the privatisation may not seem like a problem now as it will bring in new cash flow, the future will definitely be one of regret.

At the moment people are up in arms about the price of petrol, this pales to the future of water. Lets not forget that water is a necessarity for life, we need it to survive & to grow food. But still industry wastes more in an hour than we use in a week in our homes.

We already have a national water crisis that the government will not admit. Think forward 10-20 years as our society grows and becomes more dependent on 'the luxuries in life' can we really afford to have precious resources in the hands of privatised companies? Will it be foreign owned? Is this the legacy we want to leave our children? WE WILL LIVE TO REGRET THIS!

Shame on you State & Federal Government for allowing this to pass it's a disgrace, WATER is the right of every citizen and should only be privatised IF the Australia citizens agree by referendum!