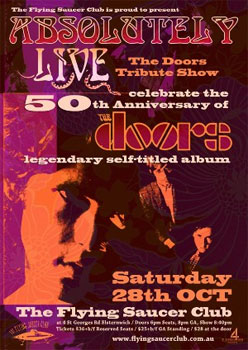 This October, The Flying Saucer Club and Absolutely Live - The Doors Show celebrate 50 years since the release of The Doors' self-titled debut album. Released in January of 1967, The Doors was not only one of the albums to have been most central to the progression of psychedelic rock, but is also one of the most acclaimed recordings in all of popular music. The album features the extended version of their breakthrough single Light My Fire, second single release Break on Through (to The Other Side) and the lengthy The End containing its Oedipal spoken word section.

The original album has sold 20 million copies world-wide and has been inducted into the Grammy Hall of Fame. It's 2007 remaster became the Doors' most successful studio album in commercial sales. In 2003, Parke Puterbaugh of Rolling Stone called the record "the L.A. foursome's most successful marriage of rock poetics with classically tempered hard rock " a stoned, immaculate classic." Sean Egan of BBC Music opined, "The eponymous debut of The Doors took popular music into areas previously thought impossible: the incitement to expand one's consciousness of opener 'Break on Through' was just the beginning of its incendiary agenda."

On Saturday 28 October, The Doors Show featuring Tony Dee aka Jim Morrison, will treat the audience to two full sets of classic Doors material. For the first half of the show the band will perform The Doors self-titled album in its entirety, then will finish off the night with all your favourite Doors hits!