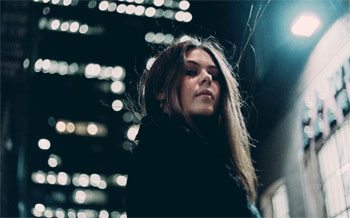 Indie newcomer Rya Park has today announced her eerie debut single Billy, a seriously catchy, name-and-shame of a track (out October 6), and she's also dropped a video to accompany Billy; simple, sultry, and dangerous, made in collaboration with director Dan Howe of Set To Suite.  She will be showcasing Billy and more tunes off her highly anticipated EP in her first run of shows hitting Oxford Arts Factory Gallery on November 4 and The Evelyn on November 9.

The intriguing Billy prompts a couple of questions…who is Billy? And what exactly did he do?  None of them are answered, but that only makes you want to listen again. Rya Park draws upon influences such as Florence and The Machine and PJ Harvey here, yet maintains a spellbinding charm that is uniquely hers.  The mysterious narrative is delivered with a raised eyebrow and a flawless vocal; a memorable performance that sits comfortably atop a sparse arrangement of gritty guitar and textural percussion.  Reflecting on the track, Rya Park explains, 'The song was inspired by a relationship that ended without explanation.  The lyrics intensely focus on a range of emotions that stemmed from the situation.  A long time had passed when I got to writing the song, but there were still so many unanswered questions and I just wanted to get everything out onto the page and not hold back."

The clip for Billy is concise and effective; Rya Park sits by herself, retelling the story of Billy and reflecting on what went wrong.  Everything is laid out on the table; it's impossible to look away as each line hits harder than the last.  Rya Park is scorned, still in the light of day but dancing slowly in the dark.  Of the collaboration with director Dan Howe, she says, 'As this is the first videoclip I've made, it was really important to me to find someone who was on the same page as me.  Dan had seen me perform a number of times and knows my songs really well, so it was really natural and easy for us to figure out what we wanted to create.  In our first meeting we agreed that we would focus on generating a mood rather than depicting a storyline."

Rya Park will be heading up the east coast to celebrate the release of Billy, and although this is her first official release, she is no stranger to the stage, fronting Melbourne's Tempus Sun as well as performing as Rya Park since 2016.  Giving fans a little taste of what to expect from the shows, she says, 'My live shows are very energetic and dramatic.  My full band is coming on tour with me so fans can definitely expect electrifying guitars, powerful rock beats, soulful harmonies and soaring vocals."