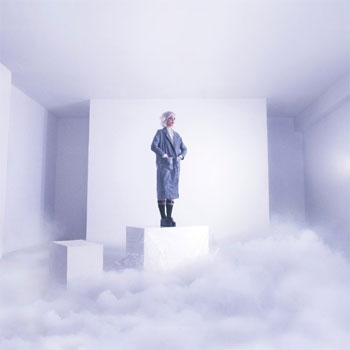 I'll Never Want A BF is Sandridge's most unapologetic and meatiest work to date. Nodding somewhat to the eighties, Sandridge's theatrical vocals spill over the top of fuzzed out guitars, a gritty synth bass and hard hitting disco hi-hats. Produced by Burke Reid (Courtney Barnett, The Drones) at Melbourne's Soundpark studios and mixed by Sandridge's previous collaborator Tony Buchen (The Preatures) in LA. Sandridge heads out on tour in support of the new single with dates in Australia, Europe and the UK.

"The song title says it all. I'll never want a boyfriend... Without a doubt this is the most autobiographical song I've ever written. My Mum gave my number to a customer (a grandfather) to give to his grandson, when I had a girlfriend. It was pretty delegitimizing... Sorry Mum (I love you)" Sandridge says of the track.

A nomadic pop/punk logomaniac, Bec Sandridge has a guitar swagger reminiscent of Prince, and the delivery of new wave icons like David Byrne. Her previous singles In The Fog, In The Flame, You're A Fucking Joke and High Tide all landed high rotation on triple j, 3RRR, FBi and community stations throughout Australia alongside international airplay in Europe.

2016 was a pivotal year for Bec - after winning the triple j Unearthed competition to play Yours and Owls Festival she signed to Wollongong label Farmer and the Owl to release her In The Fog EP. As well as play a myriad of shows supporting the likes of Montaigne and Cub Sport and nabbing festival slots at Festival Of The Sun, Fairgrounds and BIGSOUND.

At home on the stage, Sandridge has traversed the country in 2017 with tours alongside The Rubens, Highasakite, The Naked & Famous and Mitski. Also, appearances at Groovin The Moo, The Hills Are Alive, Big Pineapple Music Festival, Mountain Sounds Festival and a welcome return to Yours & Owls Festival, with The Plot still to come.

"Because shows should always be inclusive and safe spaces. I want to ensure that everyone has a good time and that everyone feels welcome and celebrated. It means that behaviour like sexism, racism, homophobia, transphobia and ableism simply aren't tolerated which is important and cool."