Moonlover Thou Shall Be Free 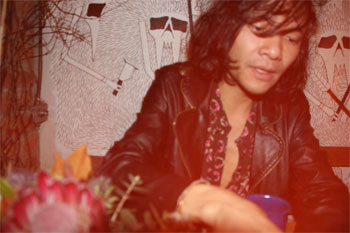 At 7:56pm tonight in the southern hemisphere the October Full Moon will rise in the zodiac sign of Aries. This is a fiery moon that will ignite many emotions and bring about a collective shift in the group consciousness that we experience as humans. It is only fitting that on this day we introduce you to the newest member of the Our Golden Friend family, Moonlover.

Moonlover is the musical project of Melbourne based mystic reveller Quang Dinh and today he shares first single "Thou Shall Be Free' lifted from his debut full length album, which shares the same name, and is set to be released on the February Full Moon in early 2018. The album was recorded, produced and performed 100% by Moonlover in his personal oasis Pink Slime Studios, mixed by the formidable talent that is John Lee (Lost Animal, Beaches, Emma Russack) and mastered by the sonic ears of Joe Carra (King Gizzard & The Lizard Wizard, Courtney Barnett, Eddy Current Suppression Ring).

"David Bowie contacted me from the other-side in a dream. I was halfway between this world and the next when he sung to me the first lines of the song 'Oh, oh, oh, oh, thou shall be free'". - Moonlover

Click below to listen / watch 'Thou Shall Be Free'

The stunning visuals that accompany 'Thou Shall Be Free' were conceptualised by Moonlover with the help of animation visionary Patrick Hase. To celebrate the birth of his new musical child into the world Moonlover will play a very special single launch show at Melbourne's B.East on Thursday 19th of October before heading out on a national tour supporting Saskwatch throughout October and November and then finishing the year with a special little show at GIZZFEST in Melbourne. Full tour and ticketing information can be found below.

As of tomorrow Grandmother Moon will begin her waining cycle before entering her new moon phase, by the time she reaches her luminous full potential in November, Moonlover will be ready to share another single and visual masterpiece with the world. In the meantime enjoy the music the Full Moon in Aries has gifted you today.