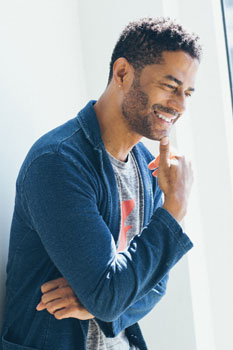 From barefoot dreadlocked troubadour to suave standard-bearer for contemporary R&B. Eric Benét may have changed his look, but one thing has remained consistent: his dedication to crafting authentic music that engages the soul.

'I'm not chasing any current whatevers," says Benét. 'It's about music that gives me goose bumps and touches my soul. That's always been a good barometer for me."

After teasing audiences with two very brief showcase club performances in Sydney and Melbourne in 2011, Australian soul & r&b fans will be ecstatic to learn that Eric Benét will finally return to Australia for his first ever concert tour, with band in tow, this November.

Kicking off his career in 80s pop group, Gerard, and then forming the group, Benét, with his sister and cousin in the early 90s, Benét came to prominence as a solo artist in 1996 with the release of his debut album, True To Myself, but music fans and the industry were truly put on notice with the release of his second album, A Day In The Life, in 1999, which boasted the monster tracks Georgy Porgy and Benét's first number 1 R&B single, Spend My Life With You featuring Tamia. Four Grammy Award nominations later, he has gone on to release five more studio albums, with his most recent eponymous release in 2016 , and enjoyed a plethora of hits including: You're The Only One, Chocolate Legs and Sometimes I Cry.

Away from music, Benét has been active as an actor with his debut movie role in Glitter, alongside Mariah Carey, feature film Trinity Goodheart and roles in television; For Your Love, Kaya, Half & Half and The Real Husbands of Hollywood. Benét is also heavily involved in two charitable organisations. Mission Save Her which was co-founded by Benét and actor/singer Reggier Benjamin, with the charity fighting against human trafficking, slavery and sexual abuse of women and girls around the world. In A Perfect World, established by Benét's wife, Manuela Testolini, is another of Benét's charitable interests and pushes to break the cycle of poverty and illiteracy in economically poor countries. Now in it's tenth year, 30,000 children and teens have benefited from the charity and the organisation has just built it's 30th school.

Twenty years into a career, which has no sign of stopping, Benét believes, one thing accounts for his ongoing success. 'When my sister and I recorded our first album as Benét, we had some control creatively but not all. The label put out a single and then dropped us right away. I told myself then that if I ever got the chance to do another record, I was going to have complete autonomy. That I was just going to do music that made me fall in love with music."

Australian fans will be sure to fall in love with Benét's plethora of hits and surprises in his live show which has been described as a
"phenomenal show & performance" (DC Nightlife) and "dynamic and delectable" (Soul Bounce) whilst UK Corner reviewed Benét's crystal clear smooth tenor-to-falsetto range by stating "his falsetto alone can command attention in any environment".

On his show, Benét says, "the conversation that happens between me and the audience while I'm performing compares to almost nothing. At the end of the day, my heart lives in R&B/Soul".

Eric Benét will be touring Australia and New Zealand, with his band, in November 2017.