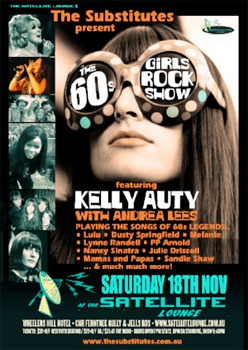 After a sold out show at The Flying Saucer Club, The Substitutes are bringing their latest creation The '60s Girls Rock Show' to the Satellite Lounge this November. The band have called upon some very special guest vocalists to share the spotlight, acclaimed R&B and Soul singer Kelly Auty and the versatile and vivacious Andrea Lees.

The night will focus on the great female singers and the bands of the period. For the first half of the show Kelly and Andrea tackle artists such as P.P. Arnold, Melanie, Sandie Shaw, Lynne Randell, Lulu, Julie Driscoll as well as the giants of the period: Dusty Springfield, The Supremes, Mamas & Papas, Nancy Sinatra and Joni Mitchell.

To finish off the night The Substitutes will perform a number of dancing favourites from their huge repertoire of '60s hits!

Kelly Auty has been heard by Melbournians singing at venues such as The Continental Café, The Regent Green Room, Downstairs at Eric's, The Lomond Hotel, The Hillz Bar, Capers, The Hyatt, The Hilton, The Palais Hepburn Springs and many more. She has supported The Divinyls, The Drifters, The Platters, Janis Ian, Jose Feliciano, Uncanny X-Men and Manhattan Transfer amongst others.