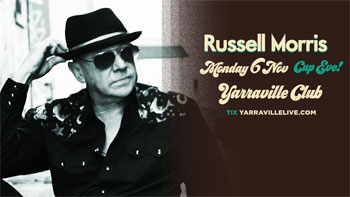 Constantly in demand, Russell stills tours nationally throughout the year as well as appearances internationally and is currently on tour to promote his forthcoming blues trilogy box set, 'Ghosts and Legends", containing his two ARIA Award winners in the Best Blues & Roots Album category Sharkmouth (2013) and Red Dirt, Red Heart (2016) as well as Russell's highest charting album in over 40 years Van Diemen's Land, which was also nominated for an ARIA Award in 2014.

Performing with his full band, this promises to be a spectacular night at the Yarraville Club with the one and only Russell Morris.