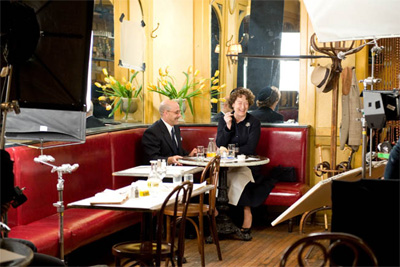 THE MANY SIDES TO STANLEY TUCCI

Stanley Tucci is one of those actors that can literally play any kind of character, from Paul Child in the current box office hit Julie and Julia to the more complex and very dark George Harvey in Peter Jackson's upcoming The Lovely Bones. He is also a renowned director whose controversial Sundance film, the fascinating Blind Date, is getting a release in the US later this year. Always charming, the gracious Mr. Tucci talked to PAUL FISCHER in this exclusive interview about these two very different films, Julie & Julia, and The Lovely Bones.


QUESTION: Stanley, Julie & Julia is a very delightful film, and it seems to have crossed gender boundaries, which I guess was unexpected, even by the studio. How surprised are you by that?

STANLEY TUCCI: I'm a little surprised, but not so much so, because people love food whether you're a man or a woman. There's a sensuality to it, a sexuality to it and people can't seem to get enough of it, you know? 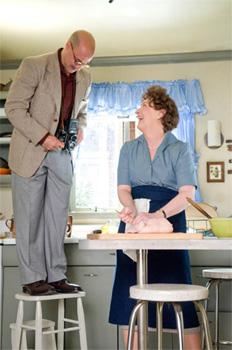 QUESTION: In fact, one of your earliest directorial movies was dealing with food. Are you a food aficionado?

STANLEY TUCCI: I wouldn't say I'm an aficionado, but I'd say I like it an awful lot.


QUESTION: The chemistry between you and Meryl is obvious in this movie and it seems to me that she's becoming now more known as a comedic actress than as the dramatic actress that sort of generated her career. Why do you think that is? And how much improv is there between the pair of you?

STANLEY TUCCI: How much improv? Oh, there's a fair amount of improv, some of which is in, some of which is on the editing room floor, or in the ether somewhere. Wherever it goes now. But, you know, the thing about Meryl is, if you look at even the dramatic stuff that she did, there's always an element of humor in it. That's why it's so human and beautiful and I just think it's the roles that she's being offered now. And frankly, I'm thrilled, because she's painfully funny.


QUESTION: What was the attraction of this because this could have easily been very much a female-centric piece, with the men kind of being relegated to the background, same as a lot of male-centric movies tend to be, with the women in the background. What were you able to lend to this that made this character leap out at you? 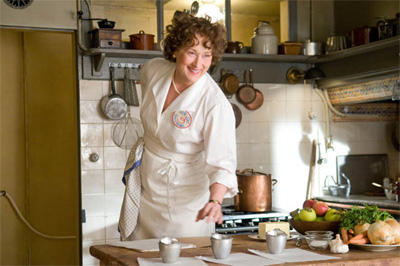 STANLEY TUCCI: Well, it's not like there was a huge amount on the page, which is what Nora will admit also. But the relationship between the two really, in some ways, is - first of all, they had a very physical relationship, a sexual relationship. But, you know, there's the unspoken that is there between them and that is, in a lot of ways, a lot more interesting to play than people just talking about their relationship, or whatever. So, as an actor, it's a great challenge and it allows you to really make - to do less and to be there, to be fully present for the other actor. If you can do that, you end up having this very strong bond with the other actor, and then the audience bonds with the two of you, and you really don't have to do very much.


QUESTION: Does doing a film like this rely on research, or can you get away with not doing anything at all? 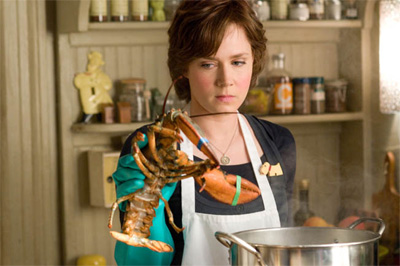 STANLEY TUCCI: No, I did quite a bit of research. I felt it was important, because we were playing real people. And I was able to talk to Alex Prudhomme, who's Paul's nephew, or great-nephew. Paul Child's great nephew, who wrote the book with Julia, My Life in France. And I also read a book that Paul's brother had written, called Roots and the Rock, about him and his young family building a vacation house up in Maine, and Paul coming to help them periodically. Just to get as many different people's perspective on Paul, who, as it turns out, was this really - I mean, we see very little of this in the film. But this guy was - and he was an extraordinary guy. He was a renaissance man, of sorts. You know, he spoke-every country he went to, as a cultural liaison, he learned the language. He was a black belt in Judo, he was a painter. He taught mechanical drawing. He was a curator, he was a photographer, he was a gourmand, he was a - became a wine expert. I mean, the guy was - had this voracious appetite for life and learning. And - you know, he designed war rooms during World War Two. And so - the more I research. He was so captivating as was their relationship. 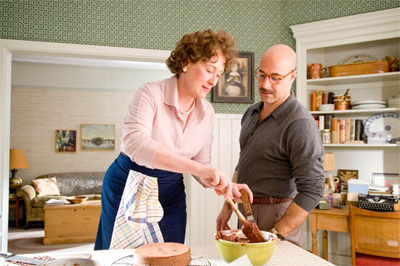 QUESTION: Was it easy for you to capture that on film? I mean, did you feel you had to work hard to capture much more of him than existed on the page?

STANLEY TUCCI: It was a little hard, because I wanted there to be more, yes. But it wasn't a movie just about Julie and Paul, number one. And it wasn't a movie about Paul, number two. It was really about this specific - these specific moments, these ten years or so, in their lives. And what the focus was, was that relationship and his support of her.


QUESTION: You seem to find very rich character roles, in an industry that tends to deny actors in their 40s and beyond those kinds of rich roles. How challenging is it for you to find a character that really gets your juices flowing?

STANLEY TUCCI: It can be tricky sometimes. You always want something to sink your teeth into, otherwise, you feel you're repeating yourself. It becomes redundant, and it becomes boring. It's not interesting. And sometimes you do just have to go do a job to make money, and sometimes - I think - who was it? Was it Edward G. Robinson who said - you did three movies a year. One for the location, one for the money, and one for the art. 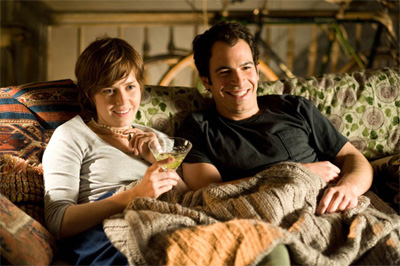 QUESTION: Yes. I guess I can categorize those.

STANLEY TUCCI: You'll be able to figure it out.


QUESTION: Tell me about working with Peter Jackson on Lovely Bones, and what that experience was like.

STANLEY TUCCI: Working with Peter was great. I mean, doing that and this movie in the same year - that was a real gift. It was kind of an actor's dream. You know? I got to work with Meryl again, work with Nora, and do this sort of lighter affair, but, still, there was substance there. And then to work with Peter and play a role that was probably the most difficult role I've ever had to play - it was extraordinary. It was a great, great experience. And working with Peter was really great. I mean, he's a very nice guy, number one and very - sort of quiet, but he has a very good sense of humor. And we had a good time. It was a long, hard shoot, but it was worth it in the end, I think.


QUESTION: It must have been hard to leave a character like George Harvey behind at the end of the day. I mean, did you find it difficult? 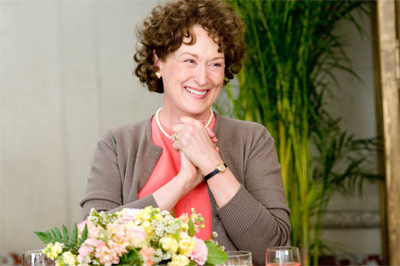 STANLEY TUCCI: Well, it was not hard to leave him behind, believe me. It was very hard to pick him up and put him on again at the beginning of the day. That was the hard part. And you had to struggle to do it. I mean, I made a lot of physical changes in order to play the role and it was nice to be able to shed those when the whistle blew at the end of the day.


QUESTION: Now I know you're planning to direct again, The Hunter. is that on the cards?

STANLEY TUCCI: I hope so. I mean, we're very close to putting the money together, but today's market is very difficult for independent movies, number one, and independent adult dramas, number two. So, my fingers are crossed, but I'm not holding my breath.


QUESTION: What about acting-wise? What else is coming up for you in terms of acting?

STANLEY TUCCI: I don't know. There are a few things out there, pending. And I'm waiting to see - I don't want to talk about any of them yet. But I'm at a point where I I had to do publicity for this movie, and for The Lovely Bones, and I sort of have to wait and see what's going to happen with my film, before I make any commitments. And I'm going to direct a play next year, too, on Broadway. So I have to work out the schedule.


QUESTION: Can you tell me what the play is?

STANLEY TUCCI: It's called Lend Me a Tenor. It was done about 20 years ago.


QUESTION: When is that going to be? 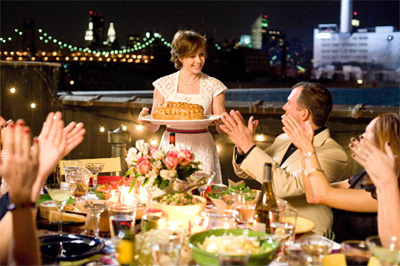 QUESTION: And Blind Date is getting a release?

STANLEY TUCCI: I really appreciate what you wrote about that and it's actually being released in September.


QUESTION: Oh, great, because I was about to ask you if it's very disillusioning, when you put your heart and soul into something and it takes-either doesn't get released, or takes a long time to get released.

STANLEY TUCCI: Yeah. I'll tell you, the last movie I directed before this one was Joe Gould's Secret, which I was very proud of, and had a really terrible release, due to circumstances within a company that produced it. And I never realized how disappointed I was until a little while later. Then I stopped making movies. I didn't direct a movie for, like, eight years and I went back and directed Blind Date, because it was such a simple format, number one, and I'd always wanted to make a movie like that. I thought it was a good way to get back into directing again, but I made it believing that no one would ever release the film.

STANLEY TUCCI: Yeah. It was the only way that I could go in and make it. But also, if you look at the film, you think, "Oh my God. Who is going to release your movie? You know, you have to be out of your mind." But I happen to love the movie, and I'm so happy and flattered that this fellow likes it, and wants to release it and given the response that we had at Sundance, and what you wrote and some other people wrote, it did prove to me that I made a movie that really did have the effect that I wanted it to have.

Based on two true stories, Julie & Julia intertwines the lives of two women who, though separated by time and space, are both at loose ends...until they discover that with the right combination of passion, fearlessness and butter, anything is possible.