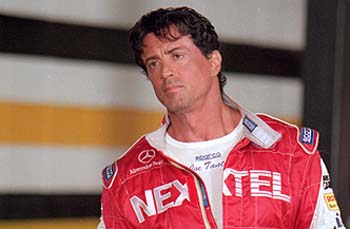 ROCKY AT THE RACES

25 years ago Sylvester Stallone became a superstar and something of a hero with Rocky. A quarter of a century on, a fit and youthful Stallone is back in the driver's seat - literally and figuratively - in the Renny Harlin-directed race car movie, Driven. It was appropriate that Paul Fischer met the Oscar winning legend in California's idyllic Long Beach, during the Toyota race trials, with the sounds of engines humming loudly in the background.

It is hard to believe that 25 years ago, Sylvester Stallone's Rocky Balboa first emerged on the screen. Meeting him, the actor looks nothing like his 55 years. Brawn and tanned, his jet black hair showing little evidence of his age, Stallone is as agile as ever, as he sets about to talk with boyish enthusiasm about his pet project, Driven. A multi-million racing car project which Stallone also wrote, Driven took four years to get made, despite the superstar's Hollywood power.

"It's almost like starting out as an unknown, because you're dealing with a project racing - that a lot of people are wary of. There have been racing movies in the past, but they haven't performed as well as say, football movies, so there's a little hesitancy. So we had to start from scratch. In this day and age you can imagine how expensive it is for a race car film to be, so to put the whole thing together and do it within a very frugal budget, is pretty impossible." Stallone admits that shopping this pet project around was a humbling experience, "because it puts your life and soul in perspective, in that you realise that this is how you started and some things that are hard fought are the ones you take great satisfaction in, unlike the ones that come too easy, like the guys who inherit $100m and end up like junkies jumping off a building. If it all came too easy, they feel unfulfilled because they haven't accomplished anything. So I think with all these hard-fought wars, you just don't quit."

Driven is based on the CART open-wheel racing circuit, in which Stallone plays a semi-retired driver who agrees to coach a young racing prodigy in turn pitted against a champion driver. "I like films that deal with two stories at the same time" Stallone explains when asked to explain his passion for getting this film made. "In other words, you have boxing with Rocky, but it's really not about boxing and it's not so much about Rocky. It's about a feeling, a kind of spirit and a dignity thing. Racing is not just about cars going on a track, it's about dealing with your own fear about dealing with the competition, and how life is a constant race; you win some, you lose some, it's about keeping your eye on that finishing line the whole time. It's a metaphor, because what we do every day is race - we race from the moment we get up, race to get here, race to get the interview, race back for your deadline, right? Why do people race? They DO it all day long from the moment they're born."

Stallone has always been attracted to underdog characters, those who fight hsrd to achieve victory of sorts. Driven is no exception. "Initially the character was much darker and more controversial in that I took a compilation of characters that had blown their careers, had been accident-prone, had become drunkards, drivers who had blown their careers at their height, and HE'S brought back originally as an example of how drivers should NEVER be."

While there are distinctions to be made between this script and that of the original Rocky, both were written at specific times in Stallone's life, and a thoughtful Stallone admits that both films are reflective of the actor's place in life. Driven explores a different facet to the Stallone persona. "I think there's a more contemplative aspect to it all and you become more philosophical and towering, and not so self-serving. I think if you start to will and project things, stuff could happen. I mean I think you have to be part of your own architect and you have to have the responsibility and discipline to be happy, but at the same time to be supportive of other people, because I think that's all part of one's success to have people also give you their love and endorsement. So that's what I tried to do in THIS film. He is more of a big brother to these guys and he says to the young driver: As soon as you can take care of yourself OFF the track, you'll be able to take care of yourself ON the track. And that's my philosophy of life, the same with acting. Until you get your private life in order, you can't keep your professional life in order, it just won't work." Stalloone's private life is more than happy. Good marriage to model Jennifer Flavin and two recent children make for one happy Sly. And he looks terrific, which is part state of mind and a reasonably healthy diet. "After Cop Land, I had a bit of time on my hands, so I went back and exercised and basically changed the diet and messed around with different herbs to see what would happen, almost like a hobby. But it's a tough hobby. I'd much rather be like I was in Cop Land'" Stallone adds laughingly.

As successful as Stallone remains, audiences still regard him as that would-be contender, Rocky Balboa. The entire series is being released in the US this month, complete with a Stallone narration. "It's unreal how burned into my brain it all is. You don't remember the off-screen stuff, the hi-jinks, especially if you're also directing them. But man, you remember that punch and who broke that jaw and being in the hospital for 10 days here sand there; all that kind of stuff." Why, after a quarter of a century, does Rocky remain etched in one's consciousness? "Because it's an ideology I think, rather than just a character performance. We take boxing liberties. Nobody can take those kinds of beatings, but again it's a mythological character. That's why we started the whole thing with the face of Christ and he comes down. It's a parable. You can take a guy who's downtrodden or whatever but there's a spark of desire to WANT to rise or fail but he will never get that opportunity. Rocky is about an opportunity to rise or fail; that's it. When I was spending years on the streets, I would relate and so when I wrote that, that was basically MY story; this one chance. The most important scenes in all the Rockies - and this is my philosophy - I know I'm going to lose, but I just want to be standing at he end, so I'm not another bum from the neighbourhood. I'm not as good, not as smart, not as gifted, but I have perseverance. And I think people can relate to that." Sly Stallone is still standing.