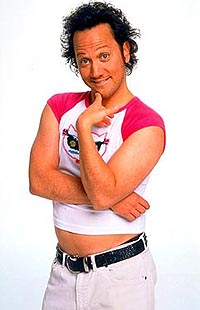 Ex-stand up comic Rob Schneider has been making a habit of turning into some outrageous characters since he started assuming the leads in some very odd comedies. He became an unlikely gigolo in the box office hit 'Deuce Bigelow', a series of animal parts in last year's 'The Animal', and now with 'The Hot Chick', Schneider is, well, the body of a 17-year old blonde cheerleader in the irreverent comedy. Will the real Rob Schneider please come forward?

"I know that I'm not enough as me; they need more", says Schneider as we chat in a Los Angeles hotel room. Dressed in a bright red shirt and black slacks, the ex-Saturday Night Live alumni and best pal with one Adam Sandler, seems to enjoy being thrust into comically weird situations. "It's all about finding new ways to make me suffer and be uncomfortable, I guess", says a smiling Schneider in between gulps of mineral water.

The premise of 'The Hot Chick' revolves around a popular yet mean-spirited teenage girl who wakes up one day to find herself turned into a man in his 30's (Schneider). Along the way to finding out how she ended up like that (and how to get back into her own body), she discovers how shallow and cruel she's always been. Schneider laughingly recalls how this film originated.

"Tom [Brady, co-writer/director] saw me making fun of my ex-girlfriend one time and thought it would make a good movie," he recalls. But Schneider thought it was risky. "It was like a high wire act, in that if it didn't work it's not going to work in a BIG way, so I knew there was a real potential for a $20m misfire." As to what it was about his ex-girlfriend that clearly inspired such comic lunacy, Schneider says it's all about a woman's energy. "I don't know how women have that much energy, just bouncing off the walls. It was just so tiring that the only thing I could do to defend myself from it was to make fun of it", he explains.

Schneider spent hours studying teenage girls. "Now that the court case is over I can talk about it," he quips. "I honestly and arrogantly thought I knew women before this, but it's not like I know them now, but there's things about women that I never noticed before," he admits with a degree of self-mocking embarrassment. "Such as the way a woman makes eye contact which is so far more intense than a man, not to mention the way that a woman is hypersensitive to everything around her," meaning, Schneider hastens to explain, "there's a feeling that women are looking at them all the time which is great, so I used that. Men don't do that, unless they're vainly homosexual."

Schneider had to tread a fine line here and keep away from being clichéd, "so I had to avoid playing it like a gay man, because that would be tired and predictable, so I wanted to play it like a younger girl." That involved including the mean-spiritedness that can often lurk within the psyche of the teenage girl. "There is definitely a viciousness and meanness that is right under the surface with adolescent girls, so with this movie, we also wanted to explore the ideas of acceptance and love. If you dig deeply into any of these storylines, you'll find love and acceptance as part of that." But he also warns not to dig TOO deeply. After all, "we weren't setting out to make a message movie but a funny film." Yet one that he hopes audiences will identify with. "This girl's got it easy. She's a pretty girl who's got it easier than most people and that's a fact and I think in some ways, that's going to bite her in the ass if she wakes up a man and those looks are gone. I thought that was somewhat interesting."

Perhaps in reality, Schneider was able to study the younger female psyche in his own backyard - or bedroom. After all, he recently married a young woman whom he admits "is somewhat in her early twenties who has another worldly elegance that I can only admire." The 39-year old actor, who was married once before and has a son from that marriage, laughs when it's suggested that his latest marriage has turned him into a more mature, gentler soul. "I don't think my wife would agree with that at all, but I would hope so. One thing I learned from doing this movie is that if you spend a day through the eyes of a woman and how a woman looks at life, women will love you for it. I genuinely try and please my wife but instead of getting bonus points for that she says: Why do you try, why not just do it? You never figure it out, but if you're LUCKY, you can be frustrated with it your whole life."

Schneider admits that his wife has a similar sense of humour to his own "or at least I thought so when I first got into the marriage. I just have to learn to be more appropriate, and not get too many laughs at her expense. It's a wonderful ballet that I'm still trying to figure out."

Personally, life couldn't get any better for the irreverent Mr Schneider and professionally, he's not doing too badly either, unwilling to necessarily switch gears like pal Adam Sandler. Why give up on a good thing? "I think we'll be doing a sequel to 'Deuce Bigelow' next. I have a great title, but no movie yet. 'Deuce Bigelow, Electric Gigolo' makes ME laugh," chuckles Schneider. He says he doesn't have a burning need to seek acceptance on a different level, as Sandler recently did with 'Punch Drunk Love'. Schneider loves to make people laugh, end of story. "There's nothing more rewarding, that I can think of, than going into the movie theatre and just hearing the audience roaring, as I used to when I saw films like 'Young Frankenstein'."