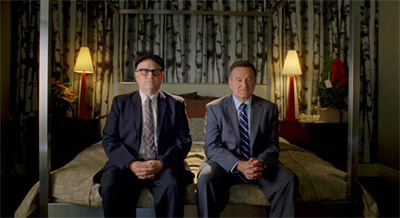 Robin Williams was a bit more subdued when we met late in the afternoon. Quietly introspective, partly because his latest film, World's Greatest Dad, is a dark and uncompromising drama, and the other is that much has changed since Robin Williams underwent heart surgery back in March, as he quotes the lyrics 'Every day above ground', and smiles. The surgery, he says reflectively, "Gives you a definite perspective on life," adding "all of a sudden you hit there, that you're mortal. But does it makes you appreciate things, little things, like breath, as well as friendships, and work. And the idea of, do you want to put a lot of energy into something where, 'this is going to make a lot of cash.' You've had a lot of cash and did that make you happy? Not really, but it was interesting."

The actor, Robin Williams also agrees that the surgery gave him such a different perspective on celebrity, "because it's a transitive thing. It comes and goes and in waves. Celebrity's like this weird thing."

Robin Williams has been in the public eye now for some three decades, and has evolved into an actor who will do an Old Dogs to refuel his taste for comedy, and then switch gears as a tortured father who lies about his son's death with the Bobcat Goldthwait-directed World's Greatest Dad, a film that he wasn't offered as an actor at the beginning. "Initially, I read it as a favor. I said, 'Listen, maybe if I do a cameo, it'll help you get it made.' Then I read it and went, "''ll do it. I'd really like to do Lance, the main character." And not as like, 'This would be good for my friend,' but like, 'No, this is really good.' And having seen Sleeping Dogs Lie, I went, 'I know you can handle strange, dark sounds like a universal scientist.' " 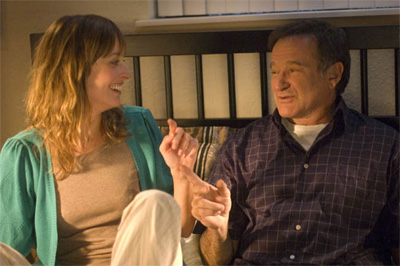 In World's Greatest Dad, Robin Williams stars as Lance Clayton, a man who has learned to settle. He dreamed of being a rich and famous writer, but has only managed to make it as a high school poetry teacher. His only son Kyle is an insufferable jackass who won't give his father the time of day. He is dating Claire, the school's adorable art teacher, but she doesn't want to get serious -- or even acknowledge publicly that they are dating. Then, in the wake of a freak accident, Lance suffers the worst tragedy and greatest opportunity of his life. He is suddenly faced with the possibility of all the fame, fortune and popularity he ever dreamed of, if he can only live with the knowledge of how he got there. Robin Williams is ferociously fearless in the film, an attitude he says he had to adopt from the outset if he was going to justice to friend Goldthwait's script. "It was the idea of coming out the other side, going, 'I'm not afraid. I know you can do this.' Also I trust him and the material was so good that I went, 'No, I want to do this.' " Asked what drew him to the character, Robin Williams says "it's almost a counterpoint to Dead Poets, in a sense," referring to the classic Peter Weir film Dead Poet's Society, in which Robin Williams played a very different kind of teacher. "Unlike that character, Lance is not inspirational. He's a marginal teacher, a marginal father and maybe - with the girlfriend, a marginal lover. It's the idea that everything in his life, he's getting by. Is he a good writer? I mean, obviously, but he's just had, one would say, bad luck, on that level."

Yet Lance is a character that hasn't given up and is still fighting, just "Having a really tough time," Robin Williams says, in further defining his character, who ultimately finds the courage to break free from the insurmountable lies he had created in order to feel less marginalized, "I think that's the very end, where you finally go, 'Okay, I can't live the lie any more.' " 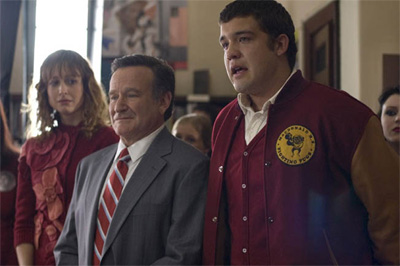 While Robin Williams is know for improvising in his movies, on this one there was little need. "Yeah, but with this, you don't have to." Being in control of a character, he says, " is easy to do, because you have - number one, good people. I also have someone I trust, to go - you don't need to add a lot and it's the way you feel. Like, it's when you get afraid, you go, 'I gotta push this.' So once you have that faith, you go - 'Cool, let's see what we can find' and you find it within, like, a much more kind of relaxed environment. I mean, you don't find yourself going, 'I'm acting now.' It's much quieter and then you find that kind of weirdly intimate stuff." The actor said he found himself identifying with the thematic elements of World's Greatest Dad. "Oh, big time, even more so now after heart surgery." Robin Williams compares the film to one of his other favorite films of the year, 500 Days of Summer. "Because of the turns that it takes, combined with how you finish - it was like - 'I didn't see that coming.' Well, that's kind of what we did it for, that's kind of the idea of having an experience where you don't know, and you kind of walk out the other side. I mean, I had that watching 500 Days of Summer, where it was so bittersweet, because at the end she was very brave and a bit like the boy who plays my son in this, where Daryl plays such a prick, that he has to be that in order for the movie to work."

Despite the fact that Robin Williams' next film, Old Dogs, is a mainstream Hollywood comedy, the actor still wants to play these darker characters who are the antithesis of the actor. "It's the only way to go", he says emphatically, adding that finding such characters remains a constant challenge. "It's hard to do and also hard to go to those places, but now I know I can do that, just by having the patience. There was a point where you have to keep making those big movies. I went, 'I've done that, and some have worked, and a lot haven't.' " Money has become less of a priority for the actor, he says reflectively. "Besides everybody's like, 'Well, if we need cash we'll go out on the road and do stand-up.' I have that outlet and then I can take the chance to go, 'Okay, this is a movie I want to make.' "

Next up is the farcical comedy Old Dogs, and soon Robin Williams heads to Australia to voice Happy Feet 2. "Yeah, that's going and George wrote it, and it's really kind of interesting. There are some really nice twists to it."

A thoughtful but outrageous comedy from Bobcat Goldthwait, WORLDS GREATEST DAD is a story about a man that learns the things you want most may not be the things that make you happy, and that being lonely is not necessarily the same as being alone.

Robin Williams stars as Lance Clayton, a man who has learned to settle. He dreamed of being a rich and famous writer, but has only managed to make it as a high school poetry teacher. His only son Kyle (Daryl Sabara) is an insufferable jackass who wont give his father the time of day. He is dating Claire (Alexie Gilmore), the schools adorable art teacher, but she doesnt want to get serious -- or even acknowledge publicly that they are dating.

Then, in the wake of a freak accident, Lance suffers the worst tragedy and greatest opportunity of his life. He is suddenly faced with the possibility of all the fame, fortune and popularity he ever dreamed of, if he can only live with the knowledge of how he got there. 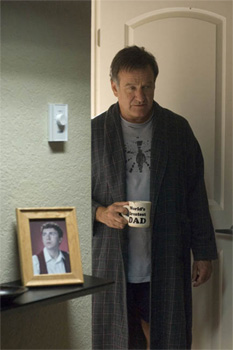