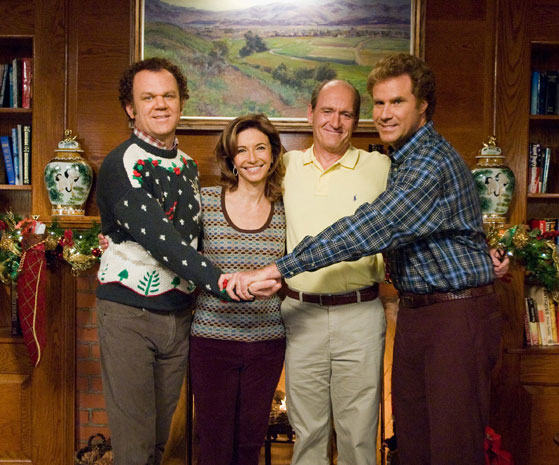 It's not easy to play the parents of Will Ferell and John C. Reilly in the irreverent Step Brothers, from director John McKay, but parents they are and trying to keep a straight face on this set proved a challenge for these therspians Richard Jenkins & Mary Steenburgen: The actors spoke to Paul Fischer.

HOW IS TO BE STRAIGHT MAN IN A FILM LIKE THIS? HOW DEAL WITH WHAT WAS HAPPENING ALL AROUND YOU?

RICHARD JENKINS: We tried to deal with what was going on all around us - deal with it, and tried to do it in as real a way as we could. It was amazing. Imrov is notsomething I do, and I was nervous about it going in. But Adam McKay and Will and John were so generous, so easy to work with, and you didn't feel that you'dmade a mistake, you always felt that you could keep going, and it was fun. So itwas almost like a learning experience for me. I just kind of hang on. Rollingand "Hang on - action!" is the way you go.

MARY STEENBURGEN: Well, I was nervous at the very beginning because it felt like, in terms of improvisation, it was kind of like getting in the ring with two Alis orsomething. Because they're pretty amazing at this. But I realized I was there forsome reason too and I shouldn't sell myself short, and I also had an opportunity to be in something that was clear to me was going to be one of the most funexperiences of my whole life, and it really was. It was one of the most freeing, fun, wonderful things. I've actually done several movies since I did that movie and I have to say I feel that that movie made me a better actor, made mehave more fun and take the work seriously but also have a kind of requisitedisrespect for rules. And it's been a good experience.


TALK ABOUT YOUR OWN PASSIONATE ENCOUNTER AT THE BEGINNING? HOW MANY TAKES DID IT NEED?

RICHARD JENKINS: Well, being older now, I could only do one.

MARY STEENBURGEN: I seem to remember we kept saying - we goofed up, and can we do it again? No, I think the thing that was so hilarious to us was the moment in the middle of that which actually was an improv moment where - when he said, "I have to tell you, I have a 40-year-old son named Dale that still lives at home with me," and I've been kissing and kissing and all of a sudden, I stare at him for a moment like - oh my god, I've finally met my soulmate. And I told him my confession and that makes him even hotter. We start kissing and that little bitwas improvised - so that was fun to kind of find that, because it really sums up- you know, to these two sadly dysfunctional people this is the only other person in the whole wide world to understand how pathetic their life has become.


SOMEBODY SAYS THAT IN LATIN CULTURE KIDS DO LIVE AT HOME UNTIL MARRIAGE.

MARY STEENBURGEN: Well, I would still have all four at home, because no one's married, and part of me would really like that but I don't know - how's that working for you?

RICHARD JENKINS: Actually I kind of like the idea. I mean my kids wanted to get out of the house and maybe I was the problem. But I could have kept them around a fewmore years. It's okay with me.

MARY STEENBURGEN: With the price of gas, no one's going to be leaving soon anyway.

RICHARD JENKINS: My parents put me out when I was 14, so I had to make do. (He's joking). No, I left after college. I came east from the midwest. I always wanted to get going, too.


ANY SCENE WHERE YOU KEPT MESSING UP?

MARY STEENBURGEN: There's a scene in the film where you can full on see that I'm laughing where I shouldn't be. And the reason they left it in the movie is that no one will be looking at me because they're all looking at Richard - the three of you

MARY STEENBURGEN: Well, I should ask people to find it. But I'll give you a hint. It'ssomething physical and no one would think to look at me in this scene, but I ofcourse saw it out of the corner of my eye - I'M STILL LAUGHING! And the editor said, there wasn't a take when you weren't laughing. So I think we now know who the least disciplined person on the set was.

MARY STEENBURGEN: Actually technically I was a stepmom in that, so I've been promoted. There was something about that sweet Christmas movie where I think he was on his best behavior, and on this movie I think somewhere he started believing the press or something, cause he was impossible. We were told not to look him in the eye - I remember that -

RICHARD JENKINS: That was okay because he's really tall . . .


IS THERE A TRILOGY PLAYING WILL'S MOTHER?

MARY STEENBURGEN: That's a good idea. Why don't you suggest that . . .


TELLL ME ABOUT YOUR NEXT PROJECTS.

RICHARD JENKINS: She's got a lot of stuff. I'm in the Coen Brothers new movie, Burn After Reading, with George Clooney and Brad Pitt and John Malkovich and Frances McDormand and me. This is the Coen Brothers description of my character - Ted Treffen the soulful manager of Hardbodies Gym.

MARY STEENBURGEN: I'm going to go and see that for sure.

RICHARD JENKINS: It's a terrific script. I haven't seen the film yet, but I hear it's fun.

MARY STEENBURGEN: I did Open Road with Justin Timberlake and Jeff Bridges and . . . I did Four Christmases with Vince Vaughn and Reese Witherspoon . . . and then I just finished a movie with Sandra Bullock and Ryan Reynolds. Let's leave itat that, shall we? In Four Christmases, both Vince and Reese have divorced parents, and after years of avoiding everybody's home at Christmas, they have to go to all four Christmases, and I'm her mom who goes through boyfriends like crazy, and each time I have a new boyfriend, I became completely like whoever that boyfriends So every time she doesn't know who she's coming home to. And my current boyfriend at that time is Dwight Yoakum who is a pastor at a sort of New Age church with Brittany headset and like dry ice. And I'm like completely his groupie. I'm just an absolute devotee, so that's why reese comes home to. Not my first time to meet her but my first time to work with her. She's great. I enjoyed it very much, And loved to work with Dwight. He's fantastic.


TALK ABOUT WORKING WITH LARRY DAVID ON CURB?

MARY STEENBURGEN: Larry's not genius at all - and I got paid for this movie, which is more than I can say about Curve. No, Larry's my buddy. He's going to be my guest all summer at Martha's Vineyard. We call him Larry the Lodger, because once he gets in there he won't get out. We had fun on Curve . . . it definitely it is addictive when you start doing that and it's not that you think that you're - Iguess what I like is what we did on Stepbrothers more than what we did onCurve because on Curve there's no script and on Stepbrothers there is a scriptthat you do first. You do the takes as written and then you go play, and you getthat wonderful balance of both. Because in the end you guys are writers, andwe're really not. So it was fun to have both.


MARY ARE YOU STILL INVOLVED WITH THE ELECTION?

MARY STEENBURGEN: I'm still very much a citizen who'll be proud to cast my vote, and if I canbe of help to Mr. Obama I will definitely do so.


ARE YOU CONCERNED ABOUT THE STRIKE?

MARY STEENBURGEN: I think we're all very much hoping that nobody has to go through that, andwe recognize that the whole Los Angeles community - and I'm sure extended even further to other parts of our state - will be hurt very much by a strike,but at the same time, these are really serious issues that our union is facingthat could affect actors from now on. Because we're at groundbreaking momentsin time. So people have to study it carefully and figure out where they stand.My husband and I are still trying to understand all the various parts of it. Imean it's all new stuff. We've never been here before. But we're very proudto be a part of our union. I believe in my union. . .