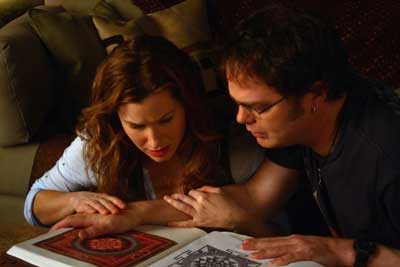 Rainn Wilson is not wearing the trademark glasses that helped define his Dwight in The Office. Now on the big screen, the often goofy character gets to be more grounded as a science teacher in the fantasy adventure The Last Mimzy. Rainn Wilson, who is now part of the ensemble of the hit TV series The Office, said it was important to do something that was the antithesis of that series. "It was a very interesting process because I just finished the second year of The Office which was just starting to kind of catch on and get known by people. Some offers were coming in from movies and they were very broad kind of family films that weren't bad by any stretch of the imagination but after playing like this kind of over the top, annoying, crazy creep for a full year, I read Mimzy and I really responded to the story," Rainn Wilson explains.

In The Last Mimzy, two children discover a mysterious box that contains some strange devices they think are toys. As the children play with these "toys," they begin to display higher and higher intelligence levels. Their teacher Rainn Wilson tells their parents that they seem to have grown beyond genius. Their parents, too, realize something extraordinary is happening. Emma, the younger of the two, tells her confused mother that one of the toys, a beat-up stuffed toy rabbit, is named Mimzy and that "she teaches me things." As Emma's mother becomes increasingly concerned, a blackout shuts down the city and the government traces the source of the power surge to Emma's family's house. Things quickly spin wildly out of their control. The children are focused on these strange objects, Mimzy, and the important mission on which they seem to have been sent. When the little girl says that Mimzy contains a most serious message from the future, a scientific scan shows that Mimzy is part extremely high level electronic, and part organic! Everyone realizes that they are involved in something incredible... but exactly what? Rainn Wilson says that for him, "it's pretty rare that you read a script that's really about something. It has something to say but at the same time it doesn't hit that nail on the head and it's not pedantic in any way, it has a spiritual, mystical message that's woven through the science fiction elements that really struck a cord and I literally was at the end of the script and I was in tears, of reading it. I felt it was something I had to do and it was kind of a choice between that and these really broad, family films where I would be running into walls a lot so it was nice to get to stretch those muscles and play a real character."

As Dwight Schrute, the obnoxious sales rep with a superiority complex second only to his boss Michael Scott (Steve Carell) in 'The Office,' Rainn Wilson took that most coveted of roles - the guy you love to hate - and ran with it, chewing up the scenery with his uberdork proclivities and hyperintense observations of his co-workers. Yet before the series went to air, nobody thought yay another American version of a popular British sitcom would work - almost nobody. "You know I was a huge English Office fan. I mean, I had seen every episode and I was just raving about it to friends. I'd seen it when it first came on BBC America and I was one of the few fans of the British show who was like, 'Oh that show's so brilliant. Oh my God! An American version of that would be fantastic! What a great idea, it's perfect! I just never had the kind of like, 'It'll never work. They're just going to screw it up' attitude. Because I felt like, well they did thirteen episodes, it's almost like a miniseries. So an American TV show - obviously you're aiming for like Seinfeld territory, you're going to do 120 episodes, and it's going to be on syndication and you're going to want to follow the characters over five or six years. I just thought, oh there's so many ways to Americanise it and I was a believer from the beginning. As soon as I met Greg Daniels, who is just one of like the humblest, smartest, nicest, sharpest guys you'll ever meet, I knew that we would be in good hands." Rainn Wilson laughs when asked if there is anything of him in Dwight. "There's a lot of me in Dwight, but I think the very worst of me is in Dwight. However I'm not so into like rules, authority and hierarchies like Dwight, so that part is pretty alien to me I have to say."

As to the future of the series, Rainn Wilson is always the philosopher. "I think that Greg already made his fortune doing King of the Hill which is in syndication so I'm hoping that they don't stretch The Office past its natural life."

Wilson is also one of the few actors who is a Baha'i, who takes his religion and its spiritualism seriously. Rainn Wilson has no problem equating his own spiritual transcendentalism with the cynicism that is Hollywood. "I've worked in a lot of things before I was an actor and I worked in New York in various fields and I had a moving company and catered and I worked in the theatre before I came out here and there's a lot of like superficial, materialistic jackasses out here, no question. But there's also some of the nicest, most grounded, most thoughtful people that I've ever met working in Hollywood who really want to make a difference and tell good stories and entertain people in a positive, uplifting way. I think there's a lot of great work like that in Hollywood which I don't think gets the attention. I think if you just look at kind of the range of movies that come out, there's all kinds of uplifting family films that have a strong message to heal racism and heal sexism and bring people together and stuff like that." While it is important for Rainn Wilson to be involved in those kinds of stories, "I also feel that one of my services that I bring to this world is that God has given me gifts to be a comedian, make people laugh, make a ridiculous fool of myself, take my shirt of and fall over pieces of furniture. I also think that there's great value in just making people laugh and that's a big service to the world. So I try and not get real precious about it, but if I can find stories that kind of make the world a better place, that's great and if I find stories that just make people laugh, that's fine too."