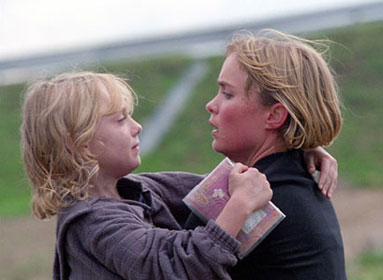 Luminous Aussie actress Radha Mitchell may never intended to be a successful actress here in Tinsel Town, but the 31-year old Melbourne native is part of that elite group of Australians who have rapidly established themselves as the best of the best in Hollywood. Along with the likes of Naomi Watts, Toni Collette and offcourse Ms Kidman, Mitchell has landed key roles in films that any Hollywood starlet would die for. Talking to the press in Beverly Hills' Four Seasons Hotel, while promoting Man on Fire, starring Denzel Washington, Mitchell is heavily made up and wearing a shiny red top, all for the sake of the day's interviews. In trying to explain the plethoric group of Australians making their mark in Hollywood, Mitchell considers the question and pauses for a short while. "They can mimic the accent," she quips. "Also, the whole kind of star system is not ingrained in Australians in the same way that it might be if you're a young actor here. I mean a lot of them go to acting school, their dream is to be in theatre and then somehow they end up in Hollywood, so initially they don't have the same vision which probably gives them some kind of mental freedom."

Before Mitchell was 'discovered' here in the Indie film High Art, she had been a university student where she had studied with would-be director Emma-Kate Croghan, who cast her in the director's film debut, Love and other Catastrophes. Mitchell laughs when recalling how that tiny film ultimately led her to glamorous Hollywood. "That film's budget was like 40 grand, with somebody's dad paying for it. Then it went to Cannes, got bought by Fox, it went to Venice and all over the world, so whenever it went to a festival we got to go," Mitchell laughingly recalls. "All of us were from Melbourne, which is a pretty small city, and hadn't seen a lot of things, so here we were getting invited to every party and having such a great time, that I think all of us came back thinking: 'Maybe we should be international actresses'." Mitchell found herself being wined and dined and at the Sundance Film Festival and recalls it was uphill from there. "So I was in America and I thought I'll stick around while I'm here and just see what happens. The next film I did was High Art, so I guess it started with a sort of vague idea but really just a fantasy." Some 20 films later, including Man on Fire, the new Woody Allen comedy and the Johnny Depp starrer Neverland, Mitchell is reaching the pinnacle of a successful career but still concedes that the reality of working in Hollywood, does not necessarily match the fantasy she once pined. "This city can be kind of brutal, so you see your dreams from every different angle, but ultimately it's about acting and if you enjoy acting, you will always enjoy acting. You may not necessarily enjoy some of the stuff that goes on around that but I guess those are the things that you have to deal with."

.The 'stuff' to which Mitchell refers is the media's intent on discovering about an actors' love life. Ferociously private, Mitchell point blank refuses to discuss her private life, no ifs or buts about it. She says she deflects those kinds of questions, adding "it's not that much of an issue for me at the moment: I just don't talk about who I'm going out with, that's it. It's an odd thing to sit around describing yourself to 10 different people every 5 minutes yet it's kind of therapeutic in a way." So here, in this surreal forum that is the Hollywood press junket, inevitably one focuses on the film at hand, a topic the actress feels far more comfortable discussing. Man of Fire, based on an eighties' novel, is a glossy thriller from British director Tony Scott. Set in Mexico, Mitchell plays a wealthy wife whose young daughter [Dakota Fanning] is kidnapped while being protected by her reluctant bodyguard [Denzel Washington]. Perhaps devised as a token screen beauty, Mitchell loved the chance, she says smilingly, of playing a character who "got to wear expensive clothes every day", but adds that a good script also helps. "I really liked the script when I read it because it was pushing the boundaries of what is acceptable to show to mass audiences and what's going to freak them out completely and I always like things that are a little bit edgy," she says, referring to some of the film's more graphic sequences. "I think the film is very bold, yet at the same time it is very sensitive. I mean things are big, brash and bold yet at the same time the people are very romantic and very in touch with whom they are."

Man on Fire is also another Hollywood revenge thriller, a subject that Mitchell admits remains perennially fascinating to moviegoers. " Revenge is a way of life and definitely some thing that we identify with. We all feel cheated in some way about some thing and how nice it would be to do something about it. I mean ultimately it's not the most Christian of sentiments." One cannot help but wonder whether Radha has ever felt vengeful. "Yeah but I'm so Zen that I would never play that out," says Mitchell, laughingly. "I think what saves the film and makes it more than some sort of random crazy explosion is that it is ultimately about redemption. Here is this guy willing to give his life for the life of somebody else and so it's not just about somebody who wants to kill and kill randomly. I mean all those moments of passion are kind of beyond his control and he can't see beyond his action but its really in some way coming from a place of love," Mitchell further explains, returning to Man on Fire. Mitchell says that while most women are able to relate to her character, her own sense of identification is limited. "I enjoyed some of the flashy elements of it. The trophy wife idea is kind of interesting and that whole idea of femininity- wearing heels, tight dresses and that kind of thing - is very Mexican and something that in the past I would have gone 'Oh my God, this is just not like me at all. However, it is a game and one that can be a lot of fun to play, as long as you're aware that it's a game."

For Mitchell, the game is that of Hollywood starlet, a role she plays with a degree of quiet reluctance. While she will receive considerable exposure from Man on Fire, the actress continues to divide her time between the blockbusters and the smaller American films, such as Woody Allen's latest, Melinda and Melinda, about which she won't discuss. She was, however, one of the priviledged few members of his ensemble cast to see a whole script. "I never got to meet with him, have lunch or anything. So I got this script and it was great, so I said 'definitely I would like to do that'. Then I arrived in New York and met him at a costume fitting, then met some of the actors who hadn't read the script so everyone was excited because we were doing a Woody Allen movie and it's going to be going down in history but no-one knew what the story was about. So we sort of arranged to meet ourselves, so we could share snippets of information. Yet at the same time we were very respectful of the process that Woody was trying to create where it is a mystery and you don't know what's going to happen. Everybody was a little bit intimidated on their first day and I think at times that's useful for the kind of heightened state that he tries to create a lot of the time."

Mitchell also completed Neverland and the Indie film Mozart and the Whale, and even had time to sneak back to Melbourne to star in last year's Aussie film The Visitors. "You'd imagine that it would just feel like 'oh you're just going home' but it feels kind of different in some way and I can't really explain why. But it was really nice to shoot that film because it was in Melbourne where my mum is, so I got to be there."