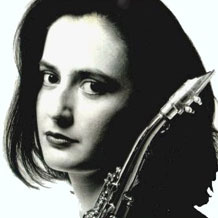 At just 31 years of age, Brisbane resident Rachel Stewart has experienced more pain than most of us would want to an endure in a lifetime.
But rather than sit back and relax, the talented saxophonist is using her experiences to produce her first album, due to be released later this year.
Yet, to be named, the album will include original compositions Rachel wrote and produced in her home studio in Eight Mile Plains, a suburb of Brisbane.


Also an aspiring fitness competitor and model, Rachel has already released her first CD, a Demo album entitled "Believe" - not bad for a young woman who only five ago was diagnosed with Osteo Sarcoma, a rare type of bone cancer which resulted in immediate invasive surgery and intensive treatment, including chemotherapy.


Always a fighter, Rachel stopped chemotherapy after a few months because of the detrimental effect on her body and she and Jamaican-born husband Wayne, a personal trainer, instead focused on natural therapies, positive thinking and a commitment to healthy eating and exercise.
And the results speak for themselves - Rachel is now happy, healthy and cancer-free, and will be officially in remission in four months.
In addition to cancer, Rachel has overcome other hurdles, including an eating disorder and depression, the legacies of a troubled childhood.
As a tall, slim and attractive young woman, evidence of Rachel's battles is barely visible, but she has used her "battle scars" (both inside and out) to make her a stronger and more focused person, committed to achieving her goal of releasing an album and competing in a natural fitness competition later this year.
Originally from Bedford, England, Rachel migrated to Perth with her family in 1982. It was here that her musical abilities were developed, although her talent was discovered at a very young age (she took up the violin at the age of three).
She attended Churchlands High School in Perth on a music scholarship, refining her oboe playing skills with teacher Joel Marangella (Principal Oboe, WA Symphony Orchestra).
Rachel was accepted into the Western Australian Conservatorium of Music in 1990, where she took up the saxophone, and shortly afterwards turned professional, playing at numerous venues throughout Perth.
In addition, Rachel was a member of the WA Youth Jazz Orchestra and women's saxophone quartet 'Saxchange', with which she toured to the Kiama Jazz Festival and performed as a support act for some of the world's best jazz musicians, including legendary American pianist Don Pullen.
One of the highlights of her career was performing in New York with US Piano legend Don Sands, and Count Basie's lead tenor sax player Billy Mitchell.
Rachel listens to and composes in a range of musical styles, including smooth jazz, R 'n B, house and hip-hop.
Her influences are broad - like her talent - and include Stevie Wonder, Michael Jackson, Whitney Houston, Herbie Hancock, Kenny Garrett, Cannonball Adderley, Dave Koz, Gerald Albright, Earth Wind and Fire, Weather Report and the The Yellowjackets.
Prior to her smooth jazz album, Rachel, donning a DJ's hat (Mark 6), produced a House music CD 'Palladium', which she distributed to friends and family.
A passion for web design has allowed Rachel to fuse her many skills and passion and share her story with the world.
Her website - www.rachelstewart.com - features her life story, photos, her diet and training program, and of course examples of her musical talents, with all 9 songs from the Palladium CD downloadable.
While Rachel is a self-starter, she may soon receive some assistance in her quest to share her talent with a broader cross-section of Australians - independent Sydney-based record company Avondale Music has expressed interest in her work, and Rachel is also currently negotiating with various venues around Brisbane to regularly perform her original compositions.


In addition, she has earned the support of Australia's top nutritional supplement company, Body Science (www.bscbodyscience.com), which allows her to maintain peak health and fitness while working full-time in an administrative position and composing and recording her music during any spare time she has.
While focused on her music, and with recent multi-Grammy Award winner Nora Jones as her inspiration, Rachel still is moving closer everyday to fulfilling her goal.
This young musician might find inspiration in others, but to many of her close friends and those who have read her story online or in Australian IronMan Magazine - she is the inspiration and living proof that a positive outlook and determination can be lifesaving.


Brought to you by www.aussiepeople.com.au.