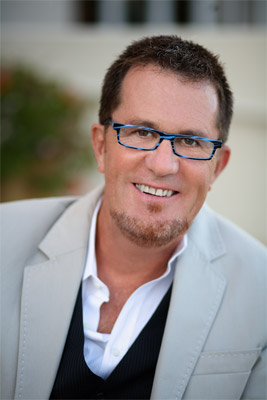 The star of 'Extreme Clutter" on the Oprah Winfrey Network as well as regular guest on 'The Rachael Ray Show" and 'The Oprah Winfrey Show", Peter Walsh's expertise in organisational design has taken North America as well as Australia by storm.

Returning to Australia exclusively for Network TEN's The Living Room, Peter's successful segment is helping transform and rebuild the lives of hoarding Australians. Removing every single item from the cluttered space and laying out the homeowners' mountain of belongings in their yard (or stadium, in some cases), Peter gives a whole new meaning to the term -spring clean.'

A common problem for many Australians, Peter helps break down the walls people have put up in clutter. With the aim of disposing 60% of a hoarder's items, Peter often uncovers deep-seeded psychological reasons to the cause of hoarding. Feelings of emptiness, unhappiness, embarrassment and anxiety lead to resistance to disposing personal items – the hoarder's walls of comfort.

Question: Is clutter and hoarding an increasing problem throughout Australia?

Peter Walsh: It's hard to say, the bottom line is that there are estimates to say that between 1-2% of the population are hoarders. It's hard to say if hoarding is increasing but certainly peoples struggle with clutter is definitely increasing and more people, than ever, are talking about their struggles with clutter.


Question: How do you define a hoarder?

Peter Walsh: People talk about clutter and hoarding in the same breath and there is a huge difference. The difference is that most people have clutter problems whether that's in the closet, garage or with the kids toys. Hoarding is a psychological condition and with hoarding there is always a mental health issue. Hoarding is way up the end of the scale. Most people enjoy an alcoholic drink and a lot of people probably drink a bit too much on a regular basis but that's a whole different thing to talking about people who are serious alcoholics.


Question: Can you talk us through how you go about helping hoarders change their lives and their homes?

Peter Walsh: This is where I differ a lot from other people who help in the organising field; one of the most important things to understand is that if you focus on the start you will never get organised. The reasoning for this is because the moment you start talking about the start, you end up in an argument. For example; if you and your partner are talking about getting rid of your shoes or their magazines, the moment you start talking about it, you end up in an argument and when you are in an argument there has to be a winner and a loser and it becomes about the argument rather than the decluttering.

The way I start in helping people declutter and get organised is to ask them what is the vision that they have for a space whether that is their home, office or a bedroom. -What do they want from that space?' is the question I ask often people respond with peace, harmony, relaxation and calming properties; a place that is easy to clean and welcoming for when friends visit. We then ask -Do all of these magazines, all over the coffee table, give you calm and relaxation and is it easy to clean?' The answer is no, so they have to go.

It all begins with a vision and then the question -Does this object, which you have in the space, help to create the vision?' If they do then hold on to them, if they don't you need to let them go.


Question: Is it about working on one room at a time?

Peter Walsh: For me, if you're already cluttered, it's very much about just getting started. I don't care so much if you start on one room first although that's often a great way to start, focusing on one space. What is most important is dedicating a certain amount of time, each day; set a timer to 10 minutes and spend that time doing nothing but decluttering and organising. If you can commit to 10 minutes, a day, you will see some amazing results. It's about spending time and getting started and a trick for that is the Trash Bag Tango and if you want to declutter your place and organise but you don't know where to start, you give everyone in the house two garbage bags and you then set a timer to 15 minutes and for that time everyone runs around the house and uses one bag for trash (broken items, rubbish) and the other bag is for objects they no longer need, use or want (clothes that don't fit, books they don't want to read, toys that kids no longer play with, plastic containers that do not have lids) for charity or goodwill. The Trash Bag Tango is only for 15 minutes and then you stop; the rubbish goes in the garbage and the goodwill bag goes in the car boot to donate. If two people do that, for just one week, at the end of the week you'll have 14 bags of garbage and 14 bags of items for donation. It's about small steps, consistent time which is regularly done to see changes.


Question: How do you ensure clients that you work with don't revert to their old ways of hoarding or clutter?

Peter Walsh: What I find is that I start getting people to ask about their room vision and I help them to start to declutter and get organised then we get to a point where the room or home they have does reflect what they want from the area then they need to start asking the question when they buy things. If they see something on sale, such as a vase, they may like it but they ask themselves -Will this help me create the space I want?' That question forces you to pause when you're buying things and helps you to not make purchases you do not need or want – it helps with impulse buys.

Don't buy anything unless it helps you create the vision you have for the space.
And, stop using the word later or procrastinating.


Question: How does this method work through all aspects of our lives?

Peter Walsh: What's amazing is that I start in people's homes but then what happens is people start asking -What's the vision I have for the relationship I want?' Often the response is that they want a partner who is smart, funny, who respects and supports them and doesn't talk over them or think they're better than me; a relationship that is open, honest and with great communication. Then, you start looking at your relationship and they may not be what you've stated earlier and you need to ask -Is what's happening in my life moving me closer to the relationship, I want?'

The question begins to transform your life, including work as you may ask -What's the vision for the job, I want and does what I do every day help me create that vision?' If it doesn't, it's time for a change. Although it starts with the objects that you own, it continues and touches every aspect of your life.


Question: What originally inspired your career as an 'organisational expert"?

Peter Walsh: I have had a lot of different jobs in my life, I was originally a teacher and I worked in Australia in Drug Abuse and Prevention, I worked in the States on developing organisation and change programs for businesses in terms of how to organise space to create efficiency and how to help when you bring companies together including how to help different cultures blend.

I started helping friends declutter and organise their homes and make their spaces look and function well, I then came to the attention of people in LA who were making a television show called Clean Sweep (FOXTEL) and they asked me to audition. I'm as crazy as any other Aussie and I went for it, I got the job and ten years later I'm the organising guy here in the States.