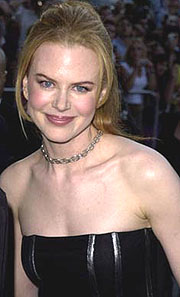 KIDMAN'S STILL A GIRL AT HEART

by Paul Fischer at the Sundance Film Festival.

Nicole Kidman was genuinely excited receiving not one, but two, nominations at the recent Golden Globes. "Getting both those nominations was actually quite exciting. I remember when they told me, I thought it would hurt both films being released so close together but it ended up helping them. It's so weird; you don't know what's going to happen around the corner." Nicole was also supportive of Aussie friends nominated for Golden Globes, such as Naomi Watts and Hugh Jackman, and now that she's won for "Moulin Rouge", it's party time for Nicole and her friends from Down Under. "We're going to have a party, I tell you!"

Asked which of the two roles she would like to receive an Oscar nomination for, Kidman laughingly responds: "I just want to be nominated; beggars can't be choosers."

In "Birthday Girl", a sometimes naked Kidman plays a Russian mail order bride to a shy British banker. Nicole, who relishes taking on unique projects, says that she was attracted to this film and character "because I'd read and liked the script and had to basically convince Jes [Butterworth, director] to cast me in it, because it was a bit of a risk to cast me as a Russian girl." Kidman had to promise him "to do the appropriate work", which included learning to speak in Russian and adopt a Russian accent. "You see, I had this vision of being able to improvise in Russian", Nicole explains laughingly. "Because I wanted to do that if the director called for it."

In addition, at the time, Kidman didn't want to take her children to England for the duration of the shoot. "I was married at the time"; she begins amidst peels of laughter. "So we had a thing where at the time we agreed we wouldn't be separated for more than 2 weeks, which would have meant it would have been impossible doing the film. So it was suggested shooting part of the film in Sydney, no less, because Tom was shooting "Mission: Impossible 2" there. I couldn't believe that they did that, but it worked out for the film, because it saved a lot of money."

Kidman thrives on taking risks, or as she puts it, "it's all about having fun". Such as her next film for Lars von Trier, "Dogville", which Kidman emphasises, is not a Dogma film. "It's the antithesis of Dogma where we're shooting on a sound stage. It's an experiment and very different from anything I've ever done." This is no Hollywood glamorous shoot. "We're all living together in a hotel in the middle of nowhere. It sounds weird but it's fantastic. We show up for lunch together and it's like being in a dormitory," she adds with more laughter.